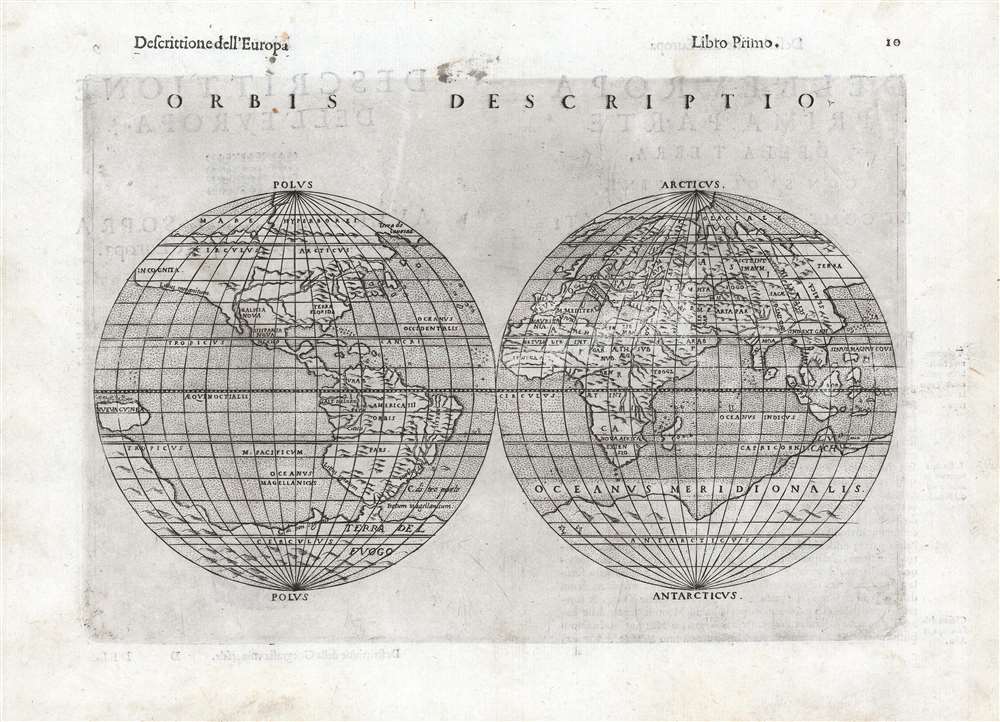 One of the Earliest Double-Hemisphere World Maps, Updated.

This is a 1598, second-state issue of Girolamo Ruscelli's 1561 map of the world. In its first, 1561 state it was the earliest acquirable double-hemisphere world map, but even this later issue remains one of the earliest acquirable maps to use this format. Like most maps in Ruscelli’s Ptolemy, the geographic details were based on Giacomo Gastaldi's (1500 - 1566) 1548 Ptolemy. Here, the double-hemispherical projection transforms this map into a fully new composition. Amongst printed maps, it is predated only by the unacquirable 1555 Georgio Sideri 'Calapoda' (fl. 1537–1565) map. The 1598 edition of Ruscelli's Ptolemy was edited by Giuseppe Rosaccio, who updated many of the maps in order to make them more competitive; most often, this involved the addition of purely decorative elements. In the case of the present map, significant geographical changes have taken place, most notably the addition of a massive southern continent not present on the 1561 issue.

Ruscelli's 1561 issue of the map implied strongly the connection of North America and Asia, using broken lines to indicate unexplored or speculative territory - this was also the case with the southwest coast of South America. These coasts still bear the notations 'Littus incognitum' and 'Littus ignotum', but the American Pacific Northwest not only no longer is marked in dotted line; there is a definite upturn in the coastline to suggest that it did not continue around to connect with Asia. The southern coasts of Tierra del Fuego and Java are no longer left incomplete: Java is shown as a definite island, whilst Tierra del Fuego is shown to be part of a massive southern continent, after the fashion of Mercator and Ortelius. The northern promontory of this Magellanica in the vicinity of Java - roughly in the location of Northern Australia - bears the place name 'Lucach,' also influenced by the same mapmakers.

Ruscelli may have derived his remarkable insular Northeast from the conflation of the Hudson River with the Saint Lawrence appearing on the Gastaldi-Ramusio map, but these features do not appear on any of Gastaldi's printed world maps. The bay separating the American Northeast from 'Terra Florida' may have been influenced by idea of the Sea of Verrazano, which appears prominently on Gastaldi's Carta Marina but not his other 1548 world map. This feature remains unchanged on this 1598 edition.

The overall shape of South America, including the shape of the mouth of the Rio de la Plata, is similar to the c. 1561 Gastaldi but is very different from his earlier works, and very distinctive in its broad and angular shape.

South Asia is mostly recognizable. The Indian peninsula, though narrow, resembles modern (as opposed to Ptolemaic) geography. Sri Lanka is marked with a Z, indicating that it is being identified as Zeylon (Ceylon), as opposed to Taprobana, which we see contracted into 'Tapr.' and applied to Sumatra. Borneo also appears and is initialed 'Bor.' The island of Java is shown with an indeterminate coast, and the island north of Borneo (roughly corresponding to the Philippines) shows a similarly tentative northern shore. Interestingly, the map lacks Japan - unless the archipelago with the initials 'IA' is intended to represent it. This would conform with Gastaldi's earlier small maps of the world, which also lack Japan. New Guinea, which names an archipelago on the 1561, is here shown as an island after the fashion of Ortelius.

This map was engraved for the 1561 first Ruscelli edition of Claudius Ptolemy's La Geografia di Claudio Tolomeo. In 1598, this work was edited and republished by Giuseppe Rosaccio. A further edition with minor typographical differences appeared in the 1599 edition. While only one separate example is listed in OCLC (in the National Library of Australia) the map does appear on the market from time to time and the volume is reasonably well represented in institutional collections.


Giuseppe Rosaccio (approx. 1530 - 1620) was a Venetian physician, astrologer, and geographer. He was born in the Venetian city of Pordenone, and graduated from the University of Padua having studied philosophy, medicine and law. He moved to seek his fortune in Tricesimo, where he worked as a physician and may have taught literature. His legal education led him to serve as a judge there in civil trials during the period between 1561 and 1575. 1607 found him in Florence in the service of Grand Duke Cosimo II (patron of Galileo). Rosaccio married, and had at least two children: Leonardo - who died on April 30, 1603 - and Luigi (also rendered as Alouisio), who collaborated with his father in his geographical work.

He was a prolific author, producing as many as forty works disseminating new knowledge (to a lay audience, using the Italian vernacular). These were mostly on the topics of astronomy and his primary interest, geography. He ventured afield on an array of subjects, including essays on Islam. He remains best known for his geographical texts, which were popular and republished in multiple editions. These included a 1598 edition of Ptolemy, a 1607 geography of Italy, and his final work - the 1610 Discorso nel quale si tratta brevemente della nobiltà, et eccellenza della Terra rispetto à Cieli, et altri elementi, was dedicated to Cosimo II and contained novel information on the American continent, including Drake and Cavendish' circumnavigations. This work included a map drawn by his son Alouisio. Learn More...