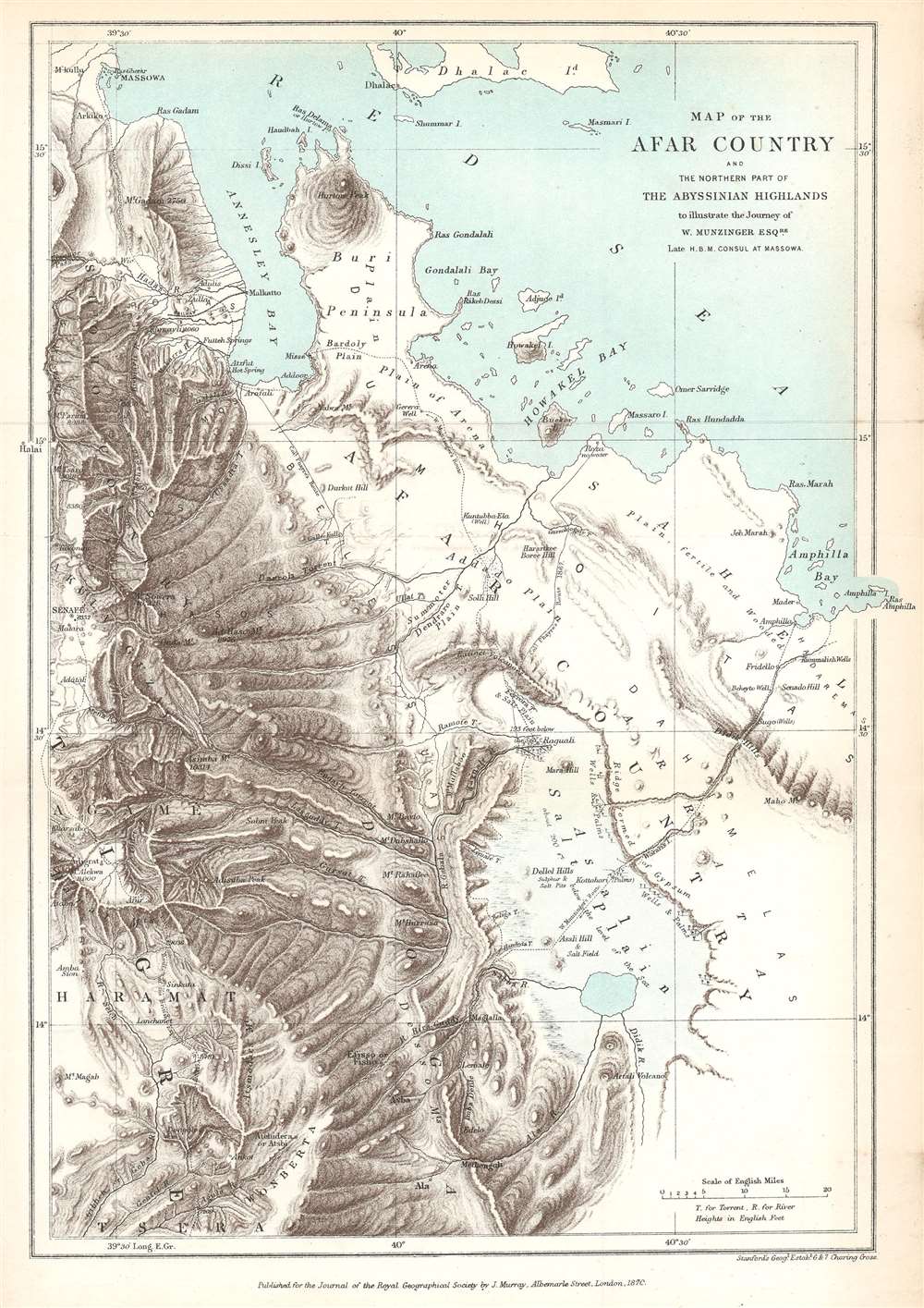 Landmark exploration of a previously unmapped region of Africa.
$200.00

This is an 1870 John Murray map of the Afar Country, comprising parts of modern-day Eritrea and Ethiopia. The map was created to accompany a The Journal of the Royal Geographical Society paper by Werner Munzinger. Dashed tracks follow Munzinger's groundbreaking exploration of the little known region.

Munzinger's peregrinations began at Amphilla and proceeded south through the Afar Country and across the Asali Salt Plain to Ala in the Desso Mountains. Munzinger and his companions then retraced their steps through the Desso Mountains before turning north along the foothills. They stopped in Misse on the Buri Peninsula along Annesley Bay, continued around the bottom of the bay, and then north to Massowa, their final destination. The map notes important geographic locations, particularly hills, wells, and settlements. Along the edge of the Salt Plain, wells and palm trees - indicators of water - are noted.

Werner Munzinger (April 4, 1832 - November 14, 1875) was a Swiss administrator and explorer in the Horn of Africa. Born in Olten, Switzerland, Munzinger attended the University of Bern, Munich University, and the Sorbonne before moving to Cairo in 1852. After a year mastering Arabic, Munzinger entered a French mercantile house and participated in trading expeditions to the Red Sea. In 1865, he became the manager of the British Massawa consulate on the Ethiopian border, but, after the 1868 British invasion of Ethiopia, he remained in Massawa and became the French consul. In July 1870, after a failed attempt to broker the French annexation of Massawa, Munzinger left French service to explore the southern Arabian Peninsula. Not long after, he became the governor of the Keren region and Massawa, this time in service to the Egyptian government. Ultimatley, Minzinger was killed in battle during the 1875 Egyptian attack on Ethiopia.

This map was created by John Murray and published in The Journal of the Royal Geographical Society in 1870. Scarce to the market and as a separate map poorly represented institutionally.

Munzinger, W., 'Narrative of a Journey through the Afar Country,' The Journal of the Royal Geographical Society Vol. 39 (Murray: London) 1869.