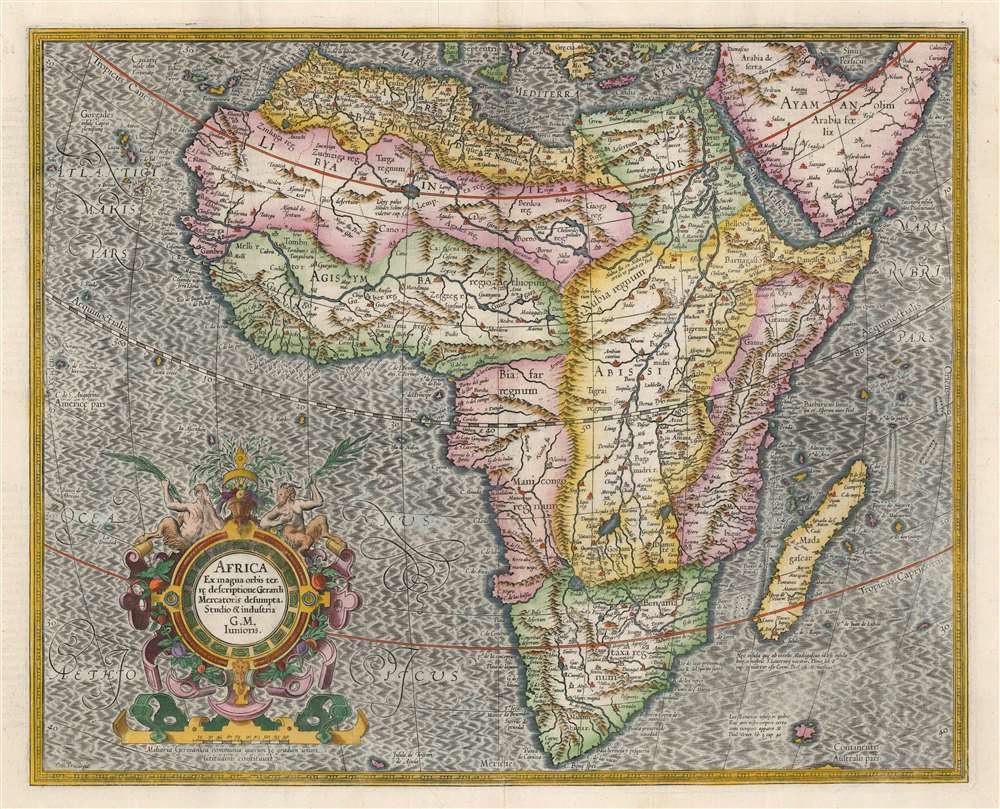 By 'The Ptolemy of His Age'.

This is an attractive Hondius edition of Gerard Mercator's 1595 map of Africa. The map is a classic, early Dutch depiction of the continent derived from the Gerard Mercator's 1569 wall map of the world. It was engraved by the illustrious Gerard's grandson, Gerard the Younger, whose command of the engravers' craft is brilliantly apparent.

The elder Mercator incorporated several modern sources in compiling the Africa data for his 1569 world map. These included Waldseemüller's 1513 maps of northwest and south Africa. As well, for much of his general outline he relied on the 1564 Gastaldi wall map of Africa. Since Gastaldi's map and the reports of Leo Africanus informed Ortelius as well, it is remarkable the extent to which Mercator's map resembles neither those of Ortelius nor Gastaldi. Mercator's map includes very different river systems. For example, the R. de Infante (Great Fish River, South Africa), whose length is exaggerated in all maps of this era, appears to run directly north on the Gastaldi, extending well above the tropic of Capricorn. Mercator's map adjusts the size down, but presents the river's angular course more accurately. Also, Mercator's depiction of the Abyssinian river systems differ significantly from the Ortelius/Gastaldi, as is his naming of kingdoms in the region - all suggesting a familiarity with contemporaneous Portuguese sources beyond those available to Gastaldi.

The Portuguese were, in the mid sixteenth century, the most active Europeans in East Africa. In part, their goal was to contact and open relations with the Coptic Christian, Abyssinian kingdoms of the Upper Nile. European travelers and geographers believed this, and not the Far East, was the location of the fabled kingdom of Prester John. Accordingly, Mercator's map presents the enthroned, crucifix-displaying ruler just west of the Nile between the kingdoms of Nubia, Barnagas, and Tigre.

Gerard Mercator the Younger engraved this map and it was included in the first, 1595 edition of Mercator's Atlas Sive Cosmographicae Meditationes De Fabrica Mundi et Fabricati Figura. It remained in the atlases after Hondius' purchase of the plates until 1633, staying in publication concurrently with Hondius' own Nova Africae Tabula. In its various editions the map is well represented in institutional collections and appears occasionally on the market. This specific example conforms typographically to both the 1609 and 1619 French-text editions of the work.