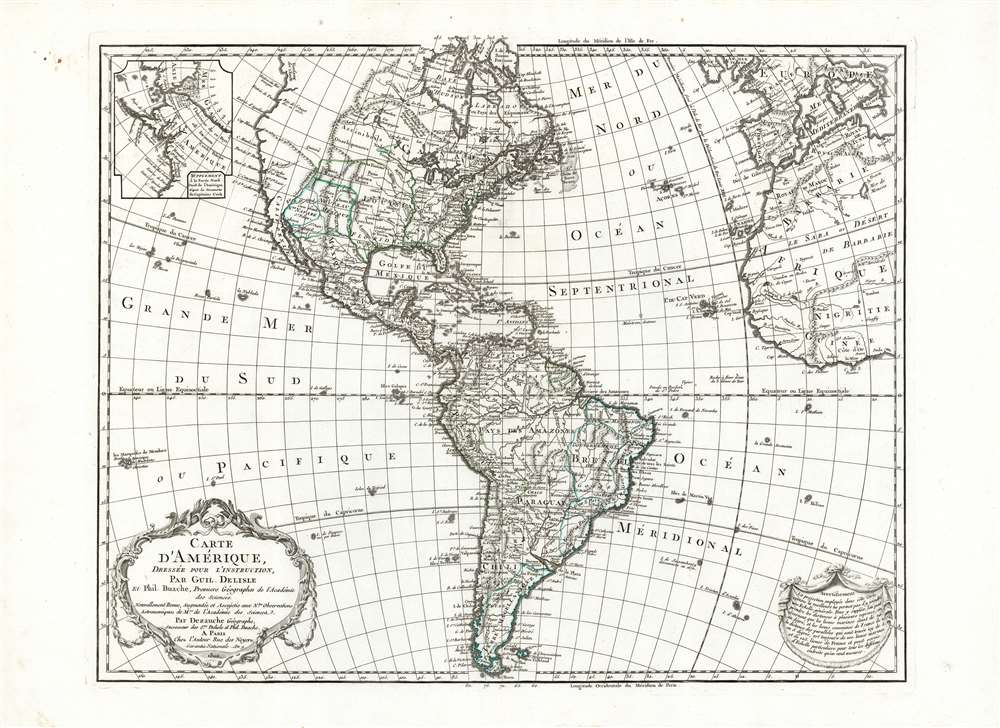 This is Jean-Claude Dezauche's 1785 map of the Western Hemisphere, here in a superb example of its 1800 revision. While the map has its basis in the similarly titled map first printed in 1722 by De l'Isle, Dezauche did not use the plate inherited from De l'Isle's heir Buache. The map was re-drawn and re-engraved for its 1785 issue, and would be further amended in subsequent printings.

Following the basic model of De l'Isle's Carte D'Amerique, this map covers the Western Hemisphere from Pole to Pole and from the Marquesas to include the Guinea coast of Africa, the Atlantic coast of Europe and the Western Mediterranean Sea. De l'Isle's scientific mapping of the hemisphere long provided a platform to present both that mapmaker's speculative geography of the Pacific Northwest and that of his heir Phillipe Buache. It's state-of-the-art mapping of the Mississippi, Great Lakes and maritime Canada were an authoritative base to build on, and late revisions of the plate included Buache's astonishing Sea of the West, as well as his theories regarding a Northwest Passage. The map's treatment of South American geography was mostly restricted to the coastline, with a broad-brush treatment for the Amazon and the Rio de la Plata. De l'Isle's South Pacific showed islands associated with the explorations of Mendana in 1595, Quiros in 1605, and Magellan in 1520. Identifiable islands including 'Terre decouverte par Davis,' the Marquesas, and the Galapagos Islands.

By 1785, there was so much to correct in De l'Isle's 1722 map that a new plate was required. The islands of the Pacific, as well as the mapping of the Pacific Northwest, have been amended to reflect the exploration of Captain Cook. An inset in the upper left shows the ice floes Cook encountered upon passing through the Bering Strait. The Great Lakes and the Mississippi are shown more precisely than in the 1722 plate, and North America east of the Mississippi has been entirely reworked to reflect the existence of the United States following the 1783 Treaty of Paris. Florida has been corrected from the archipelagic form on De l'Isle's maps to a more recognizable form. In South America, riverine systems are shown in greater detail and precision, and regions of the interior not known or named in the early 18th century (such as the Government of Goiás in Brazil) are included.

At the northern extreme of the main map (as well as in the inset map of Cook's discoveries), Dezauche includes 'Fousang des Chinois'. Fusang or Fousang is a settlement first documented by the Chinese Buddhist missionary Hui Shen in the 5th century. Hui Shen describes a land some 20,000 Chinese Li (c. 8000 km) east of the China coast. Fusang is further described in the 7th century Book of Liang by Yao Silian. There are also accounts that the land was settled c. 220 BC by a Chinese Emperor of the Han Dynasty. In later days Fusang was commonly used in Chinese poetry to designate Japan, nonetheless the earliest, and presumably most accurate, references keep it distinct. In any case, Hui Shen's description of Fusang with regard to distance and geography, corresponds more with the coastlands of North America than with Japan. The French historian Joseph de Guignes in his 1761 article 'Le Fou-Sang des Chinois est-il l'Amérique? ' promoted this idea, and thus the colony appeared on maps such as this.

'Made for the Use of the King'

The re-engraving of the plate offered the opportunity to expand the map's title cartouche significantly. Dezauche was able to use the additional space to emphasize the illustrious lineage of the map, as well as its Royal imprimatur. Dezauche was identified here as 'successor to the Messieurs De l'Isle and Buache,' who themselves were entitled 'First Geographers to the King and the Royal Academy'. The map itself was advertised as being prepared 'for the Use of the King.' The cartouche retained the decorative features of the 1722 map, including the crown and the royal fleurs de lis. Such advertisements and embellishments would not remain fashionable.

As early as 1790, the Royal Arms were defaced upon the copperplate and the crown changed into a black cap; later that same year the headgear was removed, and the arms replaced with the ribbons, as on the present example. The map's title would be amended: no longer 'Dressée pour l'Usage du Roi', but 'Dressée pour l'instruction. No longer royal geographers, De l'Isle and Buache are referred to as 'Premiers Géographes de l'Academie des Sciences'. The 1785 Royal privilege is replaced with a 'Garantie Nationale'. While some of these changes merely reflect changes from a Royal bureaucracy to a Republican one, it must be said that a publisher who wished to retain the connection between his head and his body would have been wise to remove Royal iconography from his material.

This plate was engraved in 1785 for inclusion in Dezauche's edition of the De l'Isle atlases, and amended several times over a print history that extended as late as 1830. The map is well represented in institutional collections.