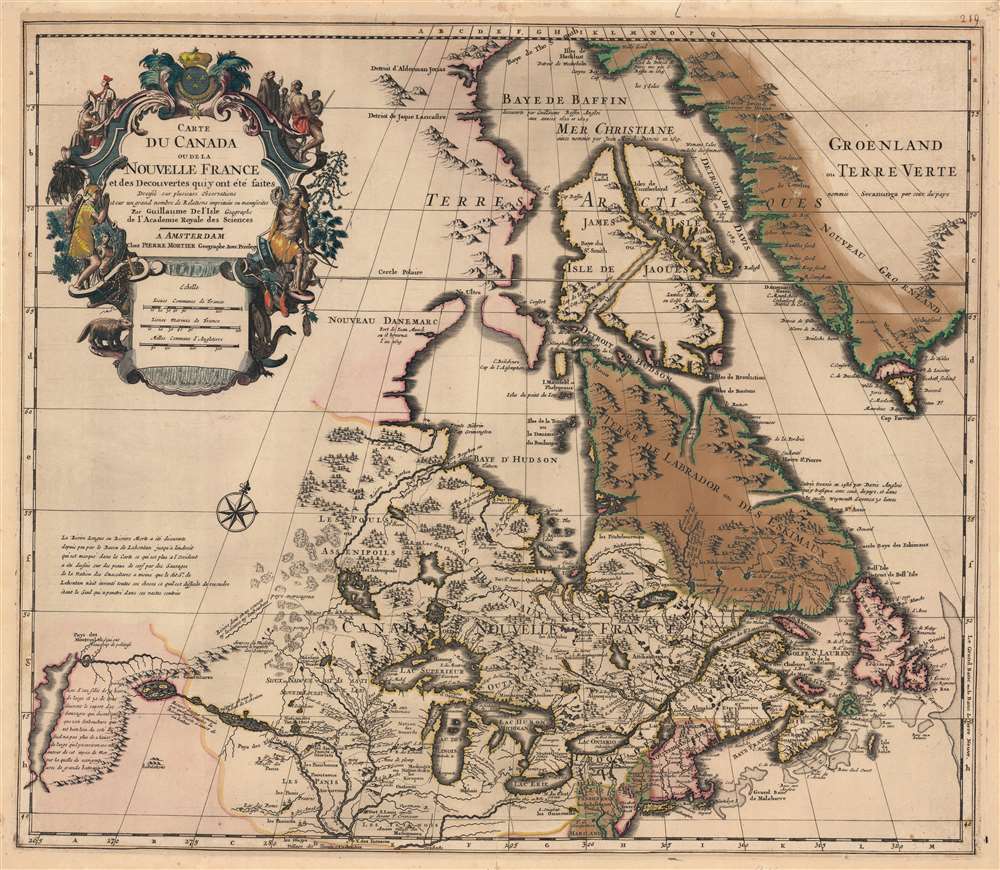 Second-earliest example of one of the most important and enduring maps of Canada - with fine original color.
$3,500.00

This is a 1708 Pierre Mortier old-color example of Guillaume de l'Isle's map of northern North America - one of the most important and influential maps of this region ever issued. The map covers the United States north of the Chesapeake and Canada or New France, including all five of the Great Lakes and Hudson Bay in full. De l'Isle first issued this map in 1703. At the time it was the most sophisticated cartographic representation of this region yet published, referencing various elements from the most recent explorations including the Jesuit Relations, Pierre Le Moyne d'Ibervile, Pierre Le Sour, and Baron de Lahontan. The present edition, published in Amsterdam by Pierre Mortier c. 1708, is the first Dutch edition. A decorative title cartouche in the upper left features stylized New World fauna, including a beaver, and missionaries converting American Indians.

One of this map's most intriguing elements is De L'Isle's treatment of the speculative explorations of the Baron Louis Armand de Lahontan, which dominate the lower left quadrant. Lahontan (1666 - 1715) was a French military officer commanding the fort of St. Joseph, near modern day Port Huron, Michigan. Abandoning his post to live and travel with local Chippewa tribes, Lahontan claims to have explored much of the Upper Mississippi Valley and discovered a heretofore unknown river, which he dubbed the 'Longue River'. This river he claims to have followed a good distance from its convergence with the Mississippi. Beyond the point where he himself traveled, Lahontan wrote of further lands along the river described by his American Indian guides. These include a great saline lake or sea (ghosted in here) at the base of a low mountain range. This range, he reported, could be easily crossed and from this point further rivers flowed westward to the mysterious lands of the Mozeemleck, and presumably the Pacific.

Lahontan's work has been both dismissed as fancy and defended as erroneous speculation by various scholars. Could Lahontan have been describing indigenous reports of the Great Salt Lake? What river was he on? Perhaps we will never know.

On his return to Europe, Lahontan published his travels in an enormously popular 1703 book that influences the most important cartographers of his day: Moll, De L'Isle, Popple, Sanson, and Chatelain to name just a few. Both the Longue River and the saline sea beyond were included in numerous maps.

The suggestion of an inland river passage to the Pacific fired the imagination of the French and English, who were aggressively searching for just such a route. Unlike the Spanish, with easy access to the Pacific through the narrow isthmus of Mexico and the Port of Acapulco, the French and English had no practical route by which to offer their furs and other commodities to the affluent markets of Asia. A passage such as Lahontan suggested was just what was needed and wishful thinking more than factual exploration fueled the inclusion of Lahontan's speculations on this and many other maps. De L'Isle, to his credit, expresses doubt about Lahontan's discoveries noting:

This map proved highly influential and was one of the best maps of this region until the explorations of late 18th and early 19th century.

This map was compiled by Guillaume de l'Isle who first published it in 1703. The map had a long lifespan and was copied and updated by multiple publishes including c. 1708 by Pierre Mortier (current example), in 1730 by Mortier's heirs 'Covens and Mortier', in 1745 by Phillipe Buache (1700 - 1773), and in 1781 by Jean-Claude Dezauche (1745 - 1824). The present edition is undated, but can only have been published in Pierre Mortier's lifetime, which means before 1710/11. Mortier maintained close ties with de l'Isle and thus this map's publication in Amsterdam proceeded with de l'Isle's knowledge and blessing - it was a partnership, not a piracy. Kershaw was unable to identify any atlas publications of this map in the Pierre Mortier edition, suggesting it was a separate issue. He nonetheless notes that the companion de l'Isle map of North America, also bearing the Mortier imprint, definitively appears in 1708 - thus the date here. This edition thus represents the first Mortier issue, or Kershaw 205a. This edition is among the earliest examples of the present map, predating all other examples except the 1703 de l'Isle first state (Kershaw 202a). We note very few examples of this edition in institutional collections and no market history.

Very good. Old original color. Some greens oxidized in Greenland and Labrador - leading to cracking of paper. These have led the entire map to be stabilized on archival tissue. Marginal foxing.