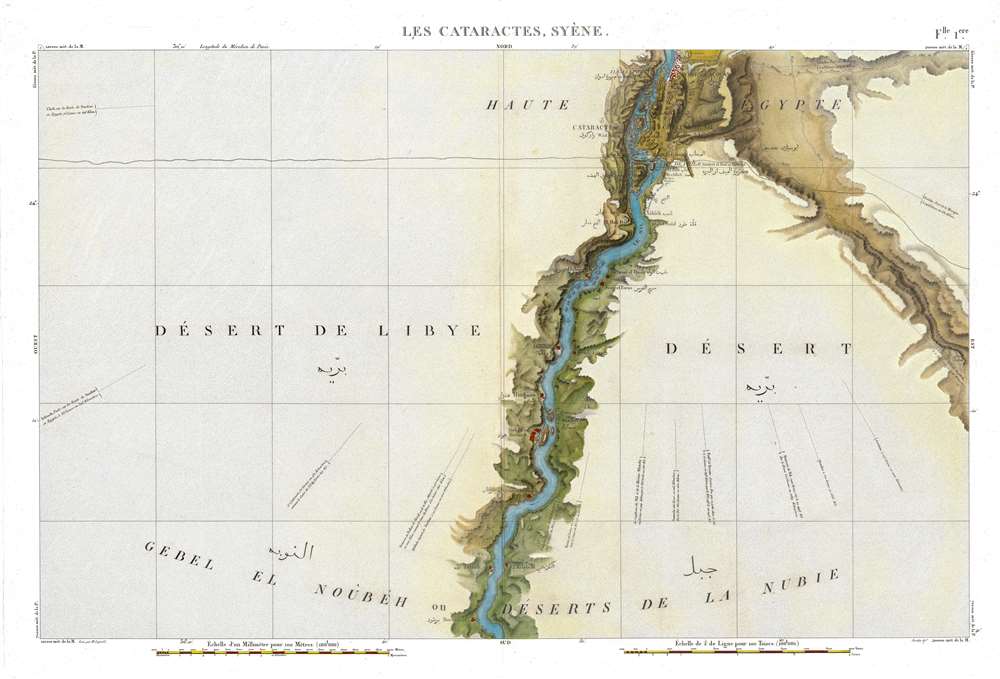 A stunning 1817 map illustrating the Nile Valley in the vicinity of Aswan, Egypt, in extraordinary detail. The map is sheet 1 from the massive atlas compiled by the Savants, military and civilian surveyors attached to Napoleon's Egypt Campaign (1798 - 1801). Coverage extends from Aswan south, including the island Temple of Philae. The map illustrates the legendary cataracts of the Nile, while for millennia prevented navigation up the Nile beyond this point. Today most of the area south of Aswan, as covered here, including the fabled cataracts and countless undiscovered ruins, is submerged under Lake Nassar, created by the Aswan Dam (1970). The detailed content focuses on the fertile Nile littoral, part of the map extends eastward along the main road to the Red Sea. Place names are included in both French and Arabic. In addition to towns, roads, and topographical features, the map offers extensive detail regarding battle sites and Ancient Egyptian ruins.

The French campaign in Egypt and Syria (1798 - 1801) was fought between the French forces of Napoleon Bonaparte against Ottoman territories in Egypt and Syria. Napoleon proclaimed his invasion of Egypt to defend French trade interests and to complete a scientific study of the region. He also hoped that seizing Egypt and Syria would destabilize British influence in the region, weakening British access to India, and encourage an alliance with Tipu Sultan, who was actively fighting against the British in India. Despite initial military successes, the campaign floundered when British Admiral Horatio Nelson sunk the French fleet at the Battle of Aboukir Bay (1798). Without naval backup and resupply, the French forces were forced to fight a had overland campaign that ultimately cost more than it gained and ended in the completely French withdrawal from Egypt.

Where the campaign filed in its military ambitions, it was a great success scientifically. Military topographers completed the most sophisticated survey of Egypt yet undertaken. More than 60 civilian scholars and scientists, known popularly as 'The Savants', compiled archeological, botanical, geological, and zoological data. Most significantly, the expedition brought the Rosetta Stone to light, effectively creating the new field of Egyptology.

Pierre Jacotin (April 11, 1765 - 1827) was a French geographer and military cartographer active in Egypt and France during the late 18th and early 19th centuries. Jacotin was born in Champigny-lès-Langres (Haute-Marne). He assisted his uncle. Dominique Testervuide in completing the first large scale land plan of Corsica in 1770. Both Jacotin and his Uncle were assigned to the Armée d'Orient for Napoleon's 1798 invasion of the Middle East and Egypt. His uncle, Dominique Testevuide (1735 - 1798), was assassinated during the October 21, 1798 Cairo Revolt. Afterwards, in 1799, Jacotin was named director of all the surveyors and geographers working in the Nile Valley. After his return from Egypt, Jacotin was assigned to the Dépôt de la Guerre and worked on preparing the manuscript maps of the Egypt Expedition for publication in a grand folio atlas volume connected to the Description de l'Égypte. In 1808 Napoleon formally made the geographic records of the Egypt Campaign, the finest maps of Egypt yet compiled, state secrets and put them under censure. It was not until 1817, after the Bourbon Restoration, that the maps were finally published as volume 23 of the Imperial Edition of Description de l'Égypte. Learn More...


Pierre Simonel (April 13, 1760 - June 6, 1810) was a French surveyor active in the late 18th century. Simonel was born in Orbigny-au-Mont, Haute-Marne, France. Simonel is best known as one of the 'Savants', scholars who accompanied the late 18th century Napoleonic invasion of Egypt (1798 - 1801). On the Egypt Expedition he held the position of Assistant Director of the Geographic Engineers. He was the nephew of Dominique Testevuide (1735 - 1798), directeur des géomètres of the Armée d'Orient, and the cousin of Pierre Jacotin (1765 - 1827), who became directeur des géomètres after his uncle was assassinated. After the Egypt Expedition returned to France, he became chef de bataillon in the Corps Impérial des Ingénieurs Géographes. Learn More...


Rodolphe Schouani (17?? - April, 1809), also occasionally spelled Schouany, was a French topographical engineer active in the late 18th century. He is most famous as one of the 'Savants', scholars who accompanied the Napoleonic invasion of Egypt (1798 - 1801). During this time his work make him a pioneer in the emerging field of Egyptology. From 1805 he was assigned to complete a survey of Piedmont, but he died before completing it. It is recorded that Schouani had a very exacting but obscure method of surveying such that, when he died, his subordinates were unable to complete the survey of Piedmont as they could not understand his journals. It has been argued that Schouani was deeply suspicious of his superiors and so, embraced a eccentric methodology to protect his position by making him indispensable. Learn More...

Description de l'Égypte (Paris) 1809 - 1823.     The Description de l'Égypte was the most exhaustive study of Egypt produced during the 19th century. The study was ordered by French Emperor Napoleon Bonaparte in conjunction with his 1798 - 1801 expedition to Egypt. It is the product of immense scholarship in all areas and is the collaborative accomplishment of some 160 civilian scholars and scientists, known popularly as 'The Savants.' There are two editions. The first edition is known as the 'Imperial Edition' and features 23 volumes issued between 1809 and 1823. The second edition, known as the Panckoucke Edition, containing 37 volumes, was issued between 1821 and 1829. Both editions include an elephant folio atlas volume containing a detailed survey of Egypt on a uniform scale of 1:100000. In 1808 Napoleon formally made the geographic records of the Egypt Campaign, the finest maps of Egypt yet compiled, state secrets and put them under censure. It was not until 1817, after the Bourbon Restoration, that the maps were finally published as volume 23 of the Imperial Edition of Description de l'Égypte. This is the most significant atlas of Egypt produced in the 19th century and is a monumental historic, cartographic, and scientific achievement. It is believed that only 1000 copies were printed, most of which went to institutional collections and so all associated maps and prints are of the utmost scarcity.