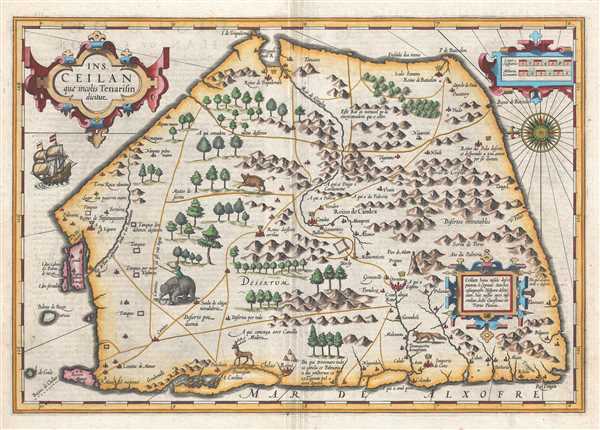 This is a 1609 Gerard Mercator and Jodocus Hondius map of Sri Lanka. The map, which is oriented from the east, depicts the entire island. Cartographically it remains vaguely defined in an unusual five-sided form – indicative of the limited understanding of this region in the 1600s. A key component in the spice trade, trading bazaars in India and Sri Lanka exposed the Western world to the spices of the East. Although trade in spices had been ongoing since before the Christian era, the advent of the European Age of Discovery completely changed the spice trade. Portuguese explorer Vasco da Gama, pioneered a sea route around the Cape of Good Hope, which opened the age of European dominance in the East.

Beautifully illustrated, the exotic stereotypes about Sri Lanka of 17th century Europe are apparent, as forests and mountains cover the island. Several different animals are illustrated on the map as well: a stag, a boar, a fox, and an elephant being ridden by a man. Numerous different cities and towns are labeled throughout, including several that have crowns drawn above them, indicating that they are Kingdoms. A decorative compass rose is situated along the right border, along with a decorative scale cartouche. A decorative title cartouche is located in the upper left corner, along with a sailing ship, with a third cartouche bearing a short Latin text in the lower right corner. Known as Portuguese Ceylon by 1609, the Portuguese maintained a presence in Sri Lanka from 1505 until 1658. Direct rule of the island by the Portuguese did not begin until after the death of Dharmapala of Kotte in 1580. Because he died without an heir, he bequeathed his kingdom to the Portuguese monarch. Portuguese rule of Sri Lanka was ceded to the Netherlands in 1658.

This map was drawn by Gerard Mercator, engraved by Petrus Plancius, and published by Jodocus Hondius in 1609.


Petrus Plancius (1522 - May 15, 1622) was a Dutch-Flemish cartographer, astronomer, and clergyman. Born in Dranouter, he studied theology in Germany and England. He became a minister in the Dutch Reformed Church at the age of 24. In 1585, fearing religious prosecution by the Inquisition after Brussels fell into Spanish hands, Plancius fled to Amsterdam. It was in Amsterdam that he became interested in navigation and cartography and soon became a recognized expert on the shipping routes to India. Plancius published his best known world map in 1592, entitled ‘Nova et exacta Terrarum Tabula geographic et hydrographica’. Plancius was also one of the founders of the Dutch East India Company, for which he drew over 100 maps.