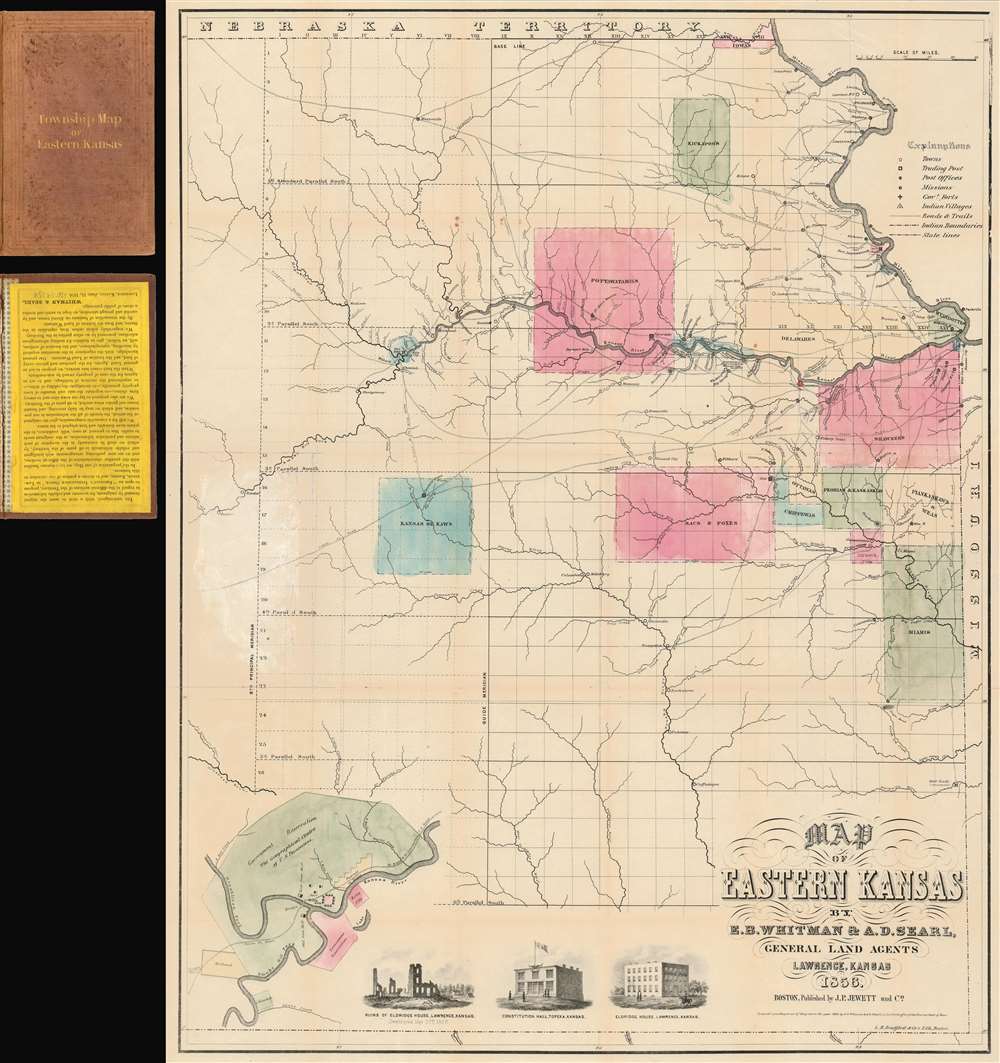 Bleeding Kansas map issued just one month after the Sack of Lawrence.

An iconic and historically important map of Eastern Kansas during the 'Free Soil' and 'Bleeding Kansas' or 'Bloody Kansas' era, published just one month after the Sacking of Lawrence. This rare and important 1856 map by the prominent abolitionists Albert D. Searle, Edmund Burke Whitman, and John Punchard Jewett covers the eastern part of Kansas from the 6th Principal Meridian or 97° 22' 08'' W to the Missouri Border and the Missouri River, and from Nebraska to, roughly, the modern day northern border of Oklahoma. The map is intended to promote 'free state' emigration to Kansas as counterbalance to a similar effort by 'slave states' to move their own settlers into the territory. Zones highlighted with color reference American Indian lands - suggesting that emigrants avoid these territories and settle away from 'Indian troubles.' In the lower left there is an inset of Fort Riley on the Missouri River, identified as the 'Geographical Center of U. S. Possessions.' At the base are vignette illustrations of Constitution Hall in Topeka, and before and after images of Eldridge House, also known as the 'Free State Hotel,' which was burned to the ground by pro-slavery vigilantes.

Bleeding Kansas: to be a Free or Slave State?

The Bleeding Kansas period is generally considered to be a precursor of the violence of the American Civil War (1861 - 1865). The Kansas-Nebraska Act of 1854 established Kansas and Nebraska as territories with the provision that the settlers in each territory would vote for whether they entered the Union as free or slave states. Emigrants from both sides flooded into the territory, hoping to achieve a critical mass and control the vote - and thus the face of national politics. Two opposing forces emerged, the pro-slavery 'Border Ruffians,' most of whom were from the neighboring slave state of Missouri, and the anti-slavery 'Free-Staters', most of whom emigrated from New England. By the summer of 1855, tensions grew to open violence with Free-Staters entrenched in and around Lawrence and 'Border Ruffians' roaming the countryside.

Aggressions between the ideologically opposed settlers came to a head in May of 1856, just as this map was being prepared. President Franklin Pierce appointed the Pro-Slavery northerner Wilson Shannon governor of Kansas Territory on August 10, 1855. Shannon's pro-slavery appointment lead to an upswell of violence throughout the territory and Shannon unabashedly used Federal forces stationed in Fort Riley and Fort Leavenworth to support his agenda. On May 21, 1856, a gang of Border-Ruffians under Douglas County Sheriff Samuel J. Jones attacked Lawrence, Kansas. Lawrence was a settlement on the Missouri River founded by Free-Staters from Massachusetts, including this map's authors, Whitman, and Searl (who laid out the town).

The Border-Ruffians ransacked the town, burning Free-Stater businesses and homes, among them Eldridge House Hotel, also known as the Free State Hotel. The Eldridge House served as a staging ground for Free-Staters emigrating to Kansas to meet and stay while they arranged the purchase of property and established their new lives. This map features engraved vignettes of the Eldridge House both after it was burnt, and the new planned Eldridge House that was actively under construction as this map went to press.

Admitted as a Free State

The question of which way Kansas would go remained a political question throughout the 1850s. Finall, in 1861, Kansas was admitted to the Union as a free state. The admission of Kansas a free state, with both senate and house representation, tipped the scales in Congress in favor of abolition, and was a major factor in the succession of the Confederacy and the outbreak of the American Civil War.

While Free-Staters were aware of the importance of luring abolitionist-minded New Englanders to Kansas, the sacking of Lawrence turned the issue vital. This map was issued less than one month after that event - underscoring Free-Stater ambitions to control the territory's future. The authors of this map include a pastedown advertising their emigrant and real-estate services. They promote their familiarity with the territory as well as their expertise with Land Warrants and other real-estate matters. What they do not overtly mention is the open fighting - one cannot easily promote emigration to a war zone. But the troubles ARE referenced in several tangential ways. Lawrence is identified as a red dot with an American Flag at center - homage to the tragedy and death. Surrounding it are three encampments of 'Shannon's Posse,' pro-slavery militias under the command of the pro-slavery territory governor Wilson Shannon. And of course, the images at the bottom of the map, which highlight the present and future of Eldridge House.

This map was commissioned by Albert D. Searle and Edmund Burke Whitman. It was probably Searle, who had a surveyor's background and helped lay out the town of Lawrence, who compiled the map. The map was published in Massachusetts by the abolitionist and publisher of Uncle Tom's Cabin John Punchard Jewett. Jewett contracted the establishment of Lodowick Harrington Bradford to engrave and print the map. Examples appear in various institutional collections, but are scarce to the market.

Edmund Burke Whitman (October 18, 1812 - September 2, 1883) was an American military officer, real estate speculator, and quartermaster active in the middle part of the 19th century. Whitman was bornin East Bridgewater, Massachusetts. He attended Phillips Exeter Academy followed by Harvard, from which he graduated in 1838. In 1855 he emigrated to Lawrence, Kansas with his family, who were ardent abolitionists and actively fought against pro-Slavery interests during the 'Bloody Kansas' period. In 1856, he partnered with fellow Lawrence pioneer Albert D. Searle (1831 - 1902) to establish a land agent and emigrant firm to encourage anti-slavery settlers to settle in Kansas. In conjunction with this effort he published an important 1856 map of Eastern Kansas. During the American Civil War (1861 - 1865), he served as a quartermaster with the Union Army and after the war as the Superintendent of National Cemeteries where he worked with more the United States Colored Troops (USCT) to recover the remains of more than 100,000 fallen Union casualties from the southern theaters. Learn More...


Albert D. Searle (July 6, 1831 - October 20, 1902) was an American surveyor, civil engineer, and abolitionist active in Kansas in the middle part of the 19th century, during the 'Bloody Kansas' period. Searle was born in Southampton, Massachusetts. Searle moved to Lawrence Kansas on September 15, 1854, with the second part to emigrate to Lawrence, and helped to layout the townsite, completing the first survey of Lawrence. In 1856 he partnered with fellow Lawrence pioneer Edmund Burke Whitman (1812 - 1883) to establish a land agent and emigrant firm to encourage anti-slavery settlers to settle in Kansas. In conjunction with this effort he published an important 1856 map of Eastern Kansas. During the American Civil War (1861 - 1865) he was commissioned as a 2nd Lieutenant in the 9th Regiment Kansas Calvary, Company A, Union Army. After mustering out of service in 1865, he continued to live in Lawrence until about 1882, when he moved to Leadville Colorado to take up a position as head survey for the Denver - Silver Pumbe spur of the Denver and Rio Grande Railroad. Searle died in Leadville in 1902. Learn More...


John Punchard Jewett (August 16, 1814 - May 14, 1884) was an American publisher and abolitionist active in Boston in the middle part of the 19th century. Jewett was born in Lebanon, Maine. As a young map he moved to Salem, Massachusetts where he worked in a bookshop and bindery. Jewett grew up in the business, eventually becoming a partner. Around 1849, Jewett relocated the firm to Boston. From at least 1835, Hewett was extremely active in anti-slavery efforts, publishing widely, and joining the first Anti-Slavery Society in New England. He was the published of Harriet Beecher Stowe's classic Uncle Tom's Cabin and Maria S. Cummins's Lamplightser. He published few maps, his most famous being a map of Eastern Kansas during the 'Bloody Kansas' period. His interests were hit hard in the Panic of 1857 and he lost his property, closing his firm. He then traveled to Europe in 1873, developing an interest in early safety matches, or as they were then known, Lucifers. On his return to the United States, he built a match factory in Roxbury, Massachusetts. Meeting with some success, he moved to the larger city of New York in 1867. He lived for an unspecified time before moving to Orange, New Jersey, where he lived out the remainder of his days. Learn More...