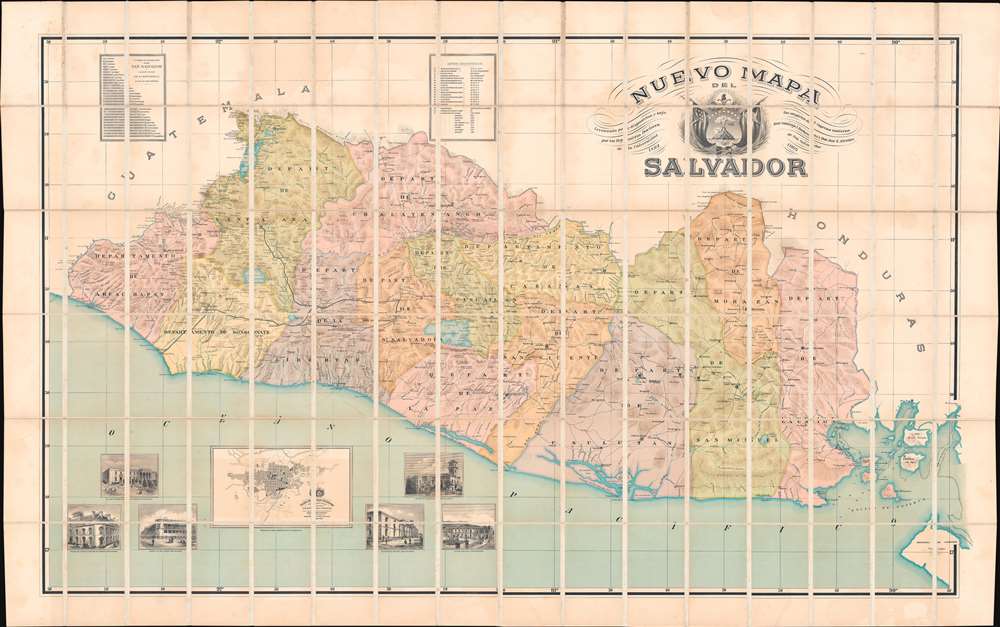 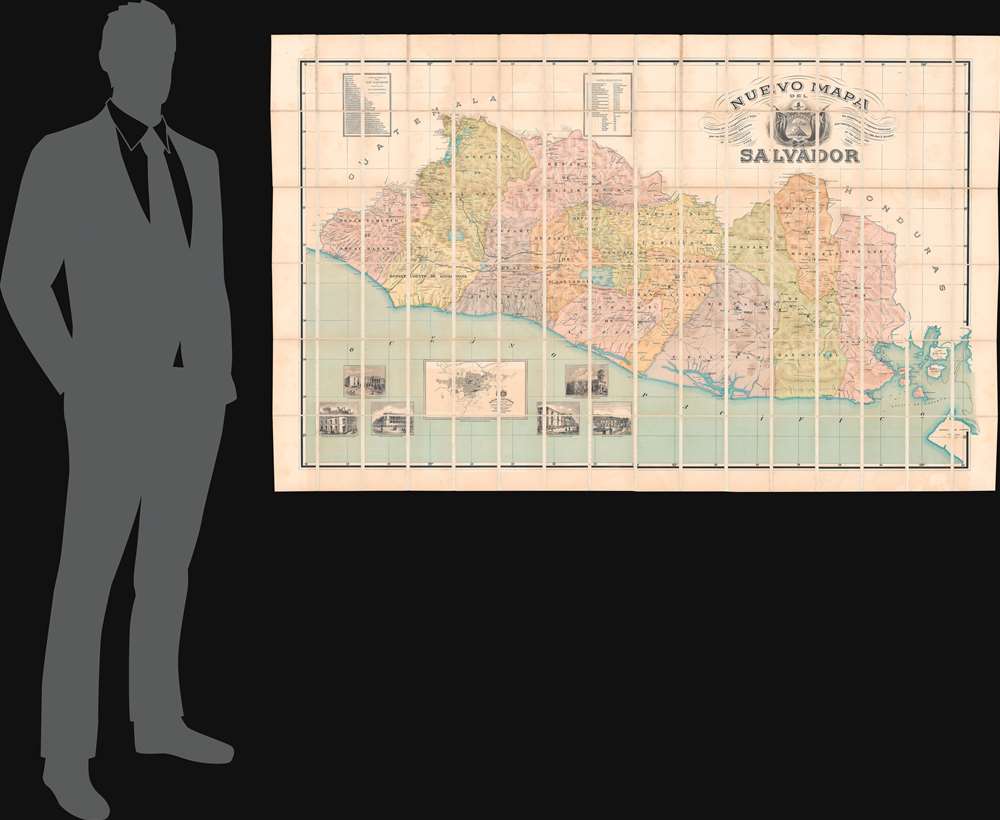 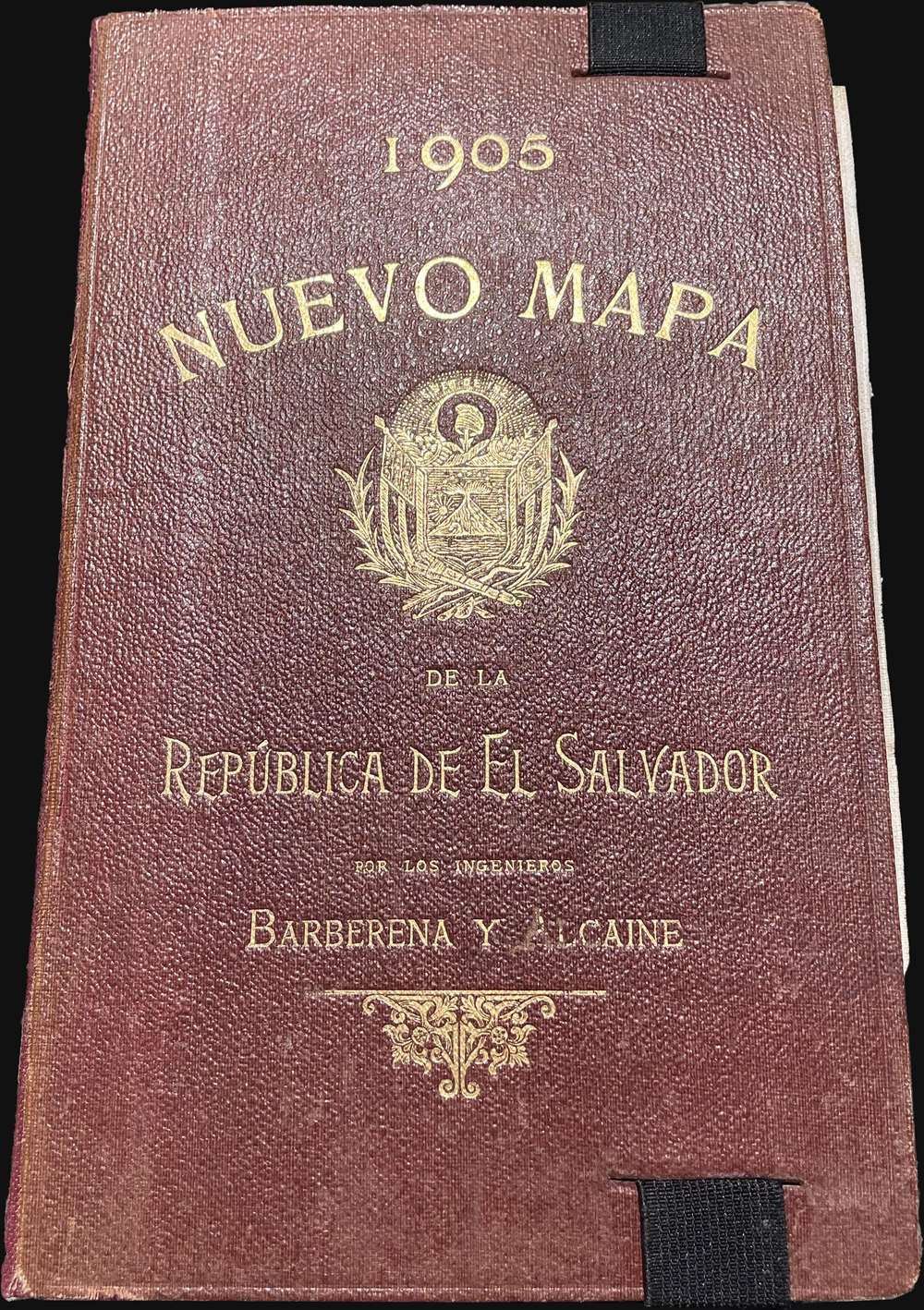 This is the rare large scale national map of El Salvador, the 'Coffee Republic', composed by Santiago I. Barberena and Jose E. Alcaine. The map, as the title suggests is a 'nuevo' national map, expanding upon and superseding the 1859 Maximillian von Sonnenstern Mapa General. It appeared during a period of political and economic optimism for El Salvador. On May 1892, the year work on this map began, El Salvador, Guatemala, Honduras, and Nicaragua signed a peace treaty strengthen relations and open the path for a future Central American Union (1896 - 1898). While the union did not last to see the map's publication, there can be little doubt that it originated from optimism associated with these efforts.

The large and impressive map divides El Salvador into its 13 provinces. It illustrates towns, topography, watershed areas, roads, and the singular railroad connecting San Salvador with the coffee production center of Santa Tecla. There are soundings in the Gulfo de Fonseca and the Bahia de la Union. A large inset in the lower left details San Salvador after a plan by José M. Peralta and Domingo Call. Surrounding the city plan are illustrations of six new monumental civil buildings.

The decorative and very large title cartouche includes fancy lettering and a large pre-1912 coat of arms for El Salvador. Its center consists of a triangle with a single volcano rising from the sea. Above the volcano is a Phrygian cap on a staff with a sunburst behind and two large cornucopia below. In 1912 the single volcano was replaced by five volcanoes to symbolize the five member states of the United Provinces of Central America.

Salvador had long been ruled by the oligarchy known as the Catorce Familias, fourteen powerful dynasties that controlled the majority of El Salvador during the 'Coffee Republic' Era (1871 - 1927). At the time, Salvador was one of the world's largest coffee exporters and, although most of the wealth flowed into the hands of the planter elite, it nonetheless spurred a period of civic improvements. The map proudly illustrates the new 'Theatro Nacional' (1903), the impressive 'Universidad Nacional', and the grandiose 'Palacio Municipal' - all relatively new constructions, some the work of the map's author, Alcaine. The map itself was inspired by efforts to unite El Salvador, Honduras, and Nicaragua to united as the Estados Unidos de Centroamérica - an effort that came to fruition in 1896 by floundered by 1898.

The map's influence proved lasting and significant. It was consulted by the International Court of Justice in both 1917 and 2000 to resolve disputes between El Salvador and Honduras over the littoral waters of Gulfo de Fonseca.

This map was compiled between 1892 and 1905 by Salvadoran engineers Santiago Ignacio Barberena Fuentes and José Emilio Alcaine. It was printed in London for publication in El Salvador. The present example is the first edition - a subsequent 2ed edition followed in 1913. We note examples in perhaps 8 institutional collections - although many of these are the 1913 second edition. In the last 30 years, we note one other appearance on the market. Rare.

Santiago Ignacio Barberena Fuentes (July 30, 1851 - November 26, 1916) was a Salvadorian educator, lawyer, historian, linguist, and engineer. He was born in Antigua, Guatemala but from 1859, studied and lived in San Salvador. He received his high school education at Colegio de la Asunción. He subsequently took degrees in law (Universidad de El Salvador, 1876) and topographical engineering (Universidad de San Carlos de Guatemala, 1877). He was then assigned as a surveyor to settle the 1878 - 1881 Guatemala - Mexico boundary question. Later, in 1886, he surveyed north-eastern El Salvador to draw the border with Honduras. He was also a noted archeologist. In 1888, at the invitation of Honduras, he participated in an expedition to the ruined Mayan city Copán. Later, in 1892, he made the first archaeological studies of El Tazumal, Casa Blanca, and Cara Sucia in western El Salvador, as well as in the Cueva del Espíritu Santo, in Corinto, Morazán. In his later years he became the director of the Observatorio Astronómico y Meteorológico de El Salvador (1893 - 1911) and the Museo Nacional de El Salvador (1903 - 1911), now known by the official name of Museo Nacional de Antropología Dr. David J. Guzmán. In 1905, José Emilio Alcaine (1866 - 1963), he is listed as the primarily cartographer behind the Nuevo Mapa del Salvador, an ambitious new national map on a large scale. Learn More...


José Emilio Alcaine (1866 - 1963) was a Salvadoran engineer, architect, and cartographer. He is best known for construction the Palácio Nacional of El Salvador, San Salvador, between 1905 and 1911, and the Teatro Nacional de El Salvador (1903). Along with Santiago Ignacio Barberena Fuentes (1851 - 1916), he is listed as the primarily cartographer behind the Nuevo Mapa del Salvador, an ambitious new national map on a large scale. Learn More...


Waterlow and Sons (1810 - 1961) was a British engraving and printing concern active in London specializing in currency, postage stamps, bond certificates, and occasionally maps. The firm was founded by James Waterlow (1790 - 1876) in 1810 on Birchin Lane, London, as a legal document printer and copyist. By 1852, they had expanded into stamps and his sons, Albert, Alfred, Sydney, and Walter joined the business. One year after James Waterlow's death, in 1877, infighting among the sons led Alfred Waterlow to split off, forming Waterlow Brothers and Layton. The rift was settled by 1920, and the two firms once again merged under the Waterlow and Sons imprint. They were involved in the Portuguese Bank Note Affair of 1925, wherein the Portuguese fraudster Artur Virgílio Alves Reis convinced the firm to print 200,000 banknotes of 500 Portuguese Escudos each, amounting to roughly 88% of Portugal's GDP. The affair was settled in court with a ruling against Waterlow. In 1928, Waterlow lost its most lucrative contract, printing English banknotes, and began to fall into decline. In 1961, they were acquired by Purnell and Sons who, shortly afterwards, sold the firm to De La Rue. Ironically, De La Rue acquired the contract to print Bank of England banknotes again in 2003 – 75 years after Waterlow lost it! Learn More...