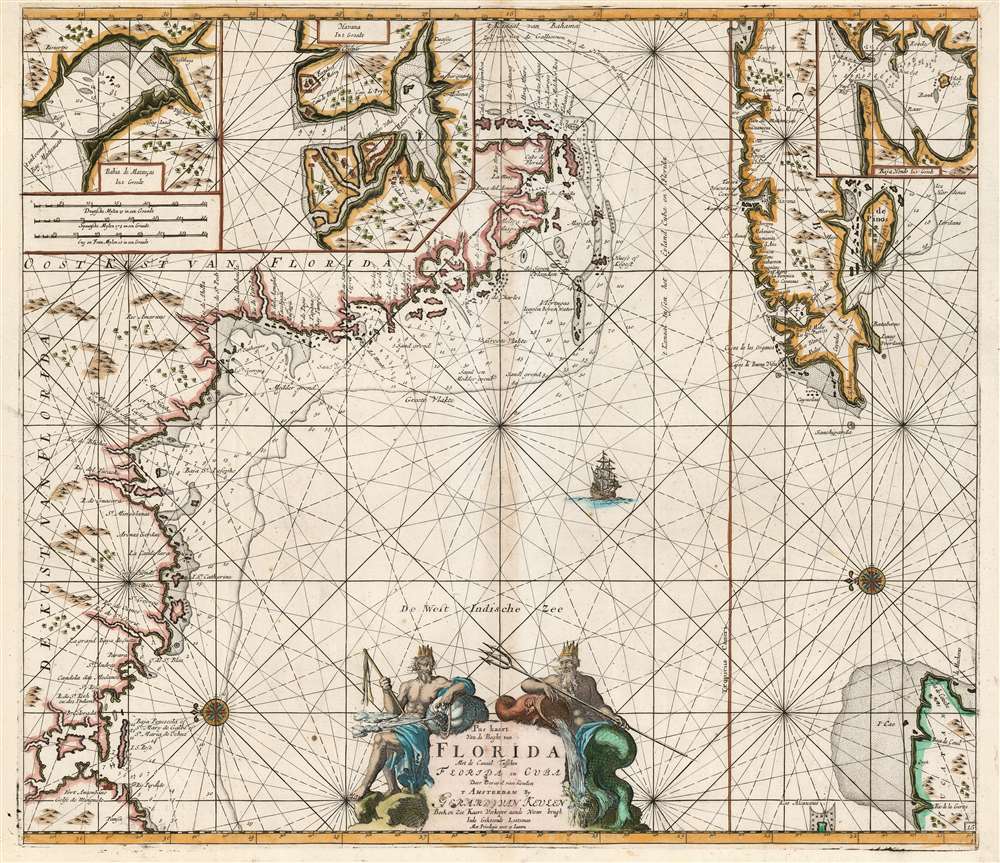 This is a beautiful, original-color example of Gerard van Keulen's thoroughly updated 1723 version of 'the first sea chart of the eastern portion of the Gulf of Mexico detailing the west coast of Florida' (Burden). It is an exceptionally rare chart that appeared late in the van Keulen record, exhibiting meticulous and important revisions unique to this edition.

The eastward-oriented chart covers the coast of Florida starting from the Perdido River, and traces the west coast of Florida's peninsula, including the Florida Keys. The chart's Floridian cartography continues up the east coast to include Key Biscayne, here marked as Caja de Biscamboa. The entirety of the Florida coastline depicted here was completely reworked by the younger Van Keulen, representing a very different chart than that produced by his father in 1684. The chart also includes the northeast corner of the Yucatan Peninsula and illustrates Cuba from Matanzas Bay and the Bahia de Cardenas westward. A trio of insets chart the key Cuban harbors of Matanzas Bay, Havana, and Hondo Bay. Most of the place names are given in Spanish and may have been informed by unpublished Spanish manuscript charts.

The earlier editions of this chart were the work of Johannes van Keulen and C. J. Vooght, and were heavily influenced by the then-fifty-year-old hydrography of Hessel Gerritz. It was first printed in 1684 in the fourth part of Van Keulen's Zee-Fakkel (Sea Torch). In Johannes' later years, his son Gerard took up the production of the atlas, and with respect to this map, Gerard added significant updates, appearing in the c. 1702 fourth state of the chart. The entire coastline of Florida - from Rio Perdido around to Key Biscayne - has been completely reworked. Indeed, the original version illustrates neither Rio Perdido nor Pensacola Bay. A town is indicated in the vicinity of modern-day Tampa Bay. The Florida Keys are far more detailed, and the whole is marked with numerous depth soundings. Although the coastlines of Cuba and the Yucatan were unchanged, the interior has been given decorative detail in the form of trees and hills, also added elsewhere in the chart. Gerard also added the track of the Spanish Galleon fleets leaving Havana for Europe via the strait between Cuba and Florida.

As with many of Van Keulen's charts, this one is embellished with a beautifully engraved cartouche. It is flanked with two divine figures. To the right is Neptune, armed with a trident and a water-flowing cornucopia. The figure on the left, with his bag of winds, is Aeolius, the god of the winds. He is armed as well, with a three-headed lash. As the lash speeds the horse, so the winds speed the sailor.

This chart was first engraved for the fourth volume of Johannes van Keulen's Zee-Fakkel in 1684. In and around 1702 the plate was significantly altered and improved by Gerard van Keulen; a further amendment of the cartouche (dated 1734 by Burden) adds Gerard's imprint, replacing the elder Van Keulen's name and that of Vooght. The present example conforms to the rare fifth state, as per Burden. We see a single separate example of this state of the chart cataloged in the Biblioteca Nacional de España, but with a date of 1723. Earlier states of this chart, particularly the third, are on the market with some regularity. This state however is very rare.


Gerard van Keulen (1678 - 1726) was a Dutch map publisher and engraver active in Amsterdam during the late 17th and early 17th centuries. Gerard was the son of the more famous Johannes Van Keulen (1654 – 1715) and eventually took over his father's business. He also negotiated to take over the Privilege of Willem Blaeu, thus becoming the official cartographer of the Dutch East India Company (VOC). He was married to Ludowina Konst (16??? - 1740). Gerard is credited with nearly 500 charts and maps published between 1706 and his death in 1726. He also continued to update and republish his family's legendary Zee-Fakkel, often described as the 'Secret Atlas' as it was restricted to VOC pilots. After his death, the firm was passed on to Gerard's son, Johannes II Van Keulen (1704-1755), who significantly updated the atlas. The final true Van Keulen editions of the atlas were published by Gerard Hulst Van Keulen (1733-1801), Johannes II's son. The final edition of the Zee-Fakkel was published posthumously in 1803. Afterwards the firm fell into the hands of the Swart family, who managed to for several generations until it finally closed its doors in 1885. It is noteworthy that though ostensibly controlled by the Van Keulen men, it was their widows who maintained and managed the firm in the periods following their husbands' deaths. Learn More...


Claes Jansz Vooght (1638 – 1696) was a Dutch astronomer, mathematician, teacher, surveyor and cartographer active in Amsterdam during the 17th century. Vooght described himself as a 'surveyor and teacher of mathematics and the art of navigation' and published extensively on these subjects. His is known to have been a surveyor for the Council of Holland and co-authored several books with Rembrantsz Dirck van Nierop. Though little is known of Vooght's life, his most important cartographic work appeared in conjunction with the prominent Johannes Van Keulen firm, with whom he partnered in 1680. Vooght was responsible for creating and compiling most of the maps in Van Keulen's seminal Nieuwe Lichtende Zee-Fakkel, with many early editions bearing only his name. Learn More...