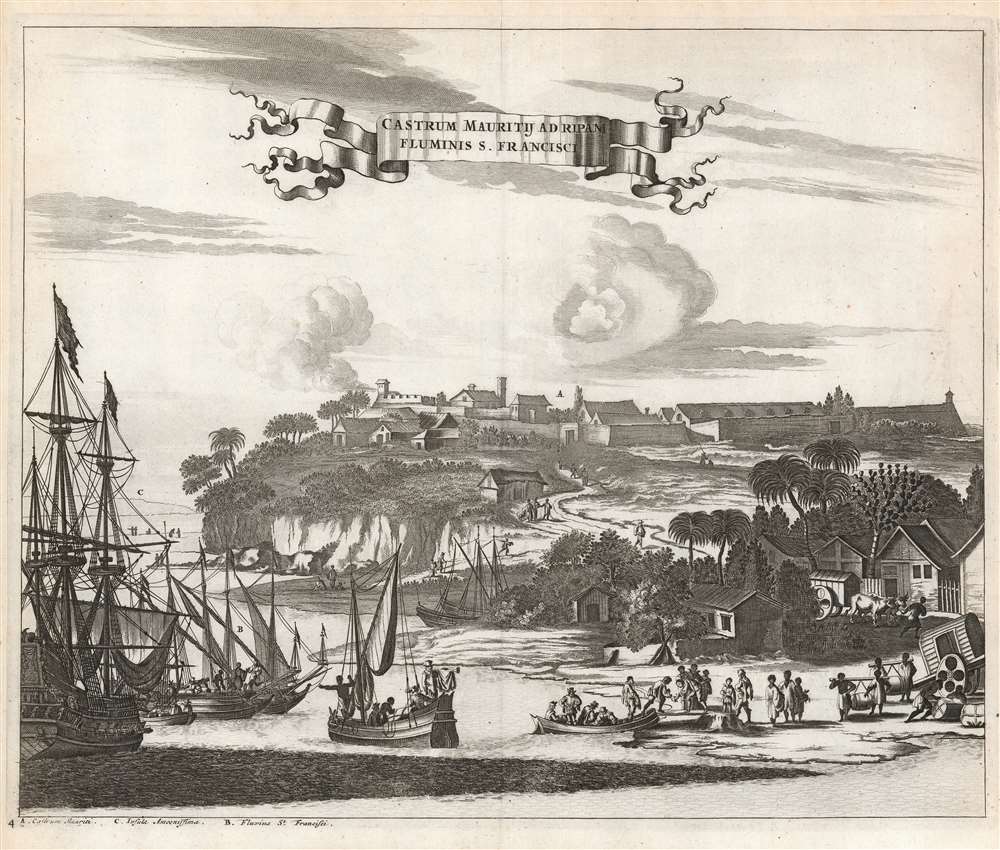 This is a 1673 Arnold Montanus view of the Dutch defenses at Fort Maurits, controlling access to Brazil's Rio São Francisco. It shows the fort atop the bluffs overlooking the São Francisco. On the shore, traders from sailing ships and river sloops meet sugar plantationers and their slaves hauling barrels of sugar or molasses.

Key Fort in the Sugar Trade

ort Maurits was established by the Dutch under the command of Johan Mauritz in 1637 as part of the West India Company's efforts to wrest the sugar-producing colony from the Portuguese. Following the capture of Pernambuco and Olinda by Hendrick Corneliszoon Loncq, the Dutch were calling their new possession Nieuw Holland - in spite of continued Portuguese resistance, leading to mutual scorched-earth campaigns which crippled sugar production for years. Dutch governance of the colony passed to Johan Maurits van Nassau-Siegen in 1637. Among his initial conquests that year was the destruction of the town of Penedo, 18 miles from the mouth of the São Francisco River. This he replaced with the fort that would bear his name - Fort Maurits - placed on the heights commanding the river.

Mauritz brought with him an entourage of artists, including the painter Frans Post, who painted a panorama of this part of the São Francisco; Joan Blaeu would commit that image to print in 1647. The present view narrows the Post/Blaeu view to focus exclusively of the fort, and embellishes it with the lively shoreline trading scene visible here. The view reflects the period in the 1630s in which the Dutch maintained the upper hand in Brazil. But the 1640s saw a resurgence of Portuguese influence, and following the WIC's removal of Mauritz in 1644 the Dutch in Brazil collapsed under Portuguese offensives. After their surrender in January of 1654, the Dutch no longer held territory in Brazil; Montanus' 1671 view reflects a reality more than thirty years past.

This view was engraved by Montanus for inclusion in John Ogilby's 1671 America and was used again by Montanus in 1673 for his Unbekannte Neue Welt in 1673. Thirteen examples of Montanus' book are catalogued by institutional collections. Seven separate examples of this view are listed in OCLC; they appear on the market from time to time.


Frans Janszoon Post (November 17, 1612 - February 17, 1680) was a Dutch Golden Age painter, and the first European artist to paint landscapes of the Americas. Of his approximately 140 known paintings, most are landscapes depicting specific locations in Brazil. He was the son of a Leiden glass painter, and the brother of a key Dutch architect. Although his initial training was likely at the hands of his father and brother, it is not known which master under which he studied and he did not join a guild until his return from Brazil. Possibly through his brother's influence, he was commissioned by Maurice, Prince of Nassau-Siegen to travel to Brazil, where he would live and work from 1637 to 1644. He would continue to paint Brazilian scenes long after his return; but his output declined sharply ten years prior to his death, possibly due to an alcohol problem. Images from his views found their way into printed maps and panoramas of Brazilian scenes, such as those produced by Joan Blaeu and Arnold Montanus. Learn More...