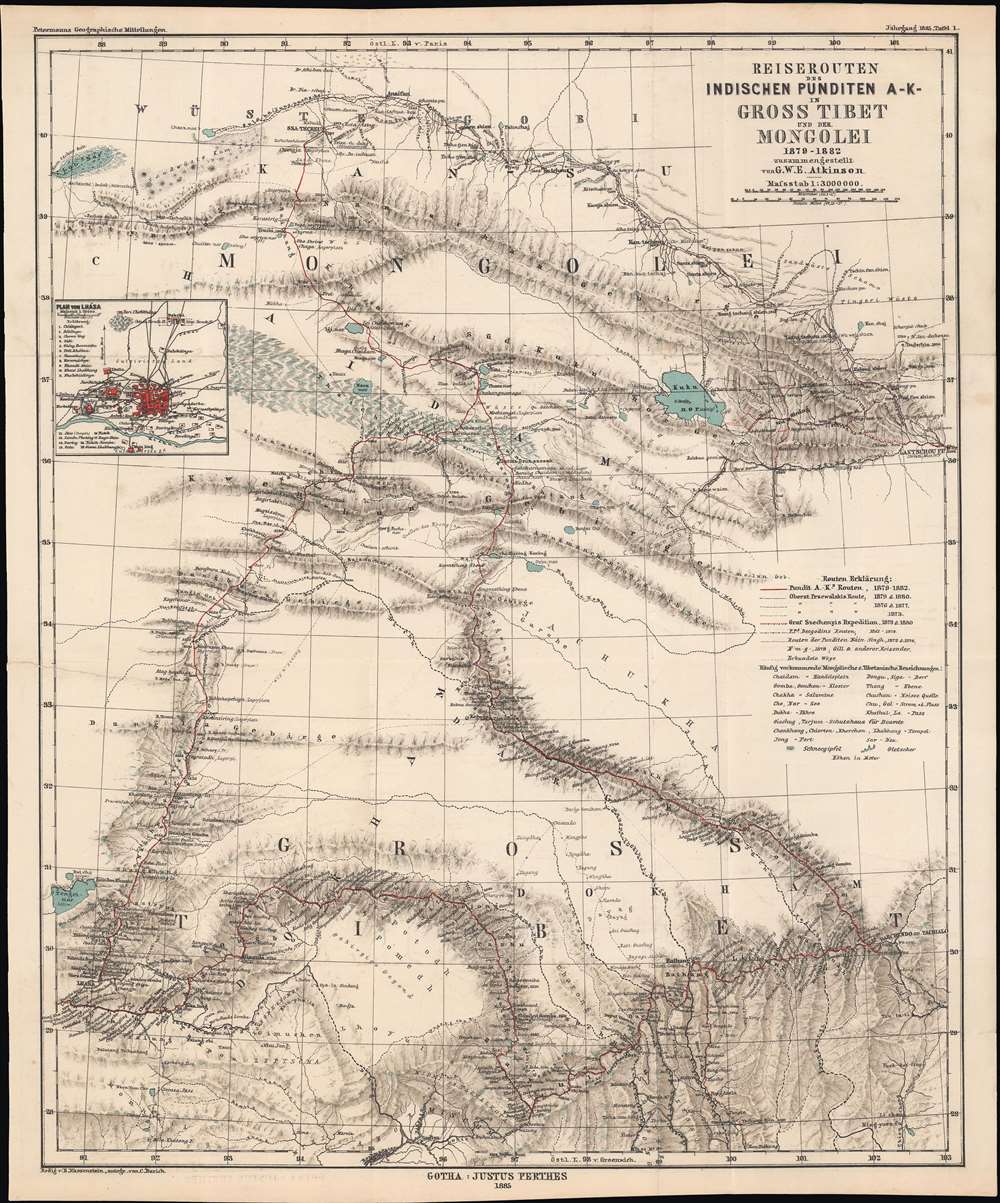 This is an 1885 map of expeditions in western China compiled by G.W.E. Atkinson. The map depicts much of today's Qinghai Province and Tibetan Autonomous Region. The map is based not only upon European expeditions, but also those of the Pundits, or Pandits - Indian and / or Tibetan explorers working secretly for the British.

The map illustrates several routes takes by different explorers, including the Singhs (who were cousins), the Hungarian Count István Széchenyi (1791 - 1860), the French missionary Auguste Desgodins (1826 - 1913), and three expeditions of the Russian explorer Nikolay Mikhaylovich Przhevalsky (1839 - 1888). European explorers were not able to travel safely or extensively in Tibet, but nonetheless those few that penetrated its borders provided important data. Przhevalsky's expeditions never reached Lhasa, his goal, but mapped previously little-known territory and brought back a wealth of scientific information. Desgodins also did not reach Lhasa despite having a passport from the Chinese government to do so, but published works on the Tibetan language and helped develop a Tibetan-Latin dictionary.

Several cities and towns are labeled, including Lhasa, which is situated in the lower left quadrant of the map near the border. An inset map of the city of Lhasa is included along the left border and various temples and other important sites are identified. Aside from mountains, other geographic features are noted, including important lakes such as Kokonor (Qinghai Lake) and Tengrinor (Namtso). The legend includes transliterations of common placename terms from Mongolian and Tibetan to German.

'Pundits,' also called 'native explorers,' were Indians, Tibetans, and other local peoples employed by the British Survey of India in the mid-late 19th century as agents to explore and map the vast regions of Inner Asia (Tibet and the Himalayas, Turkestan, western Mongolia) that lie between India and the expanding Russian Empire. They are identified here in the map's title as 'A.K.', a code name of Nain Singh and Kishen Singh, two of the earliest and most prominent pundits. As the Tibetans were generally wary of outsiders, pundits could more easily travel and disguise themselves as traders or lamas than Europeans could. Moreover, most pundits came from communities in the Himalayas, and were much more accustomed to the climate, terrain, and culture of the Himalayas than surveyors from elsewhere in India, let alone Britain.

The Great Trigonometrical Survey was a massive and ambitious undertaking to map the Indian subcontinent, which started as an independent project but was folded into the preexisting Survey of India under the leadership of Sir George Everest (1790 - 1866) (namesake for the mountain). As much of the Indian subcontinent had been thoroughly mapped by the mid-19th century, the Great Trigonometrical Survey began to focus more on the Himalayas and areas beyond British control. As the British and Russian Empires drew closer to each other in Inner Asia in the 19th century, the challenge of mapping out the intermediate regions was of critical importance in trying to gain an advantage. In the end, these surveys led to important scientific advances (in geography, cartography, and navigation) that were driven by geopolitical competition, akin to the space race of the 1950s - 1960s.

The status of Tibet and neighboring regions under Qing rule remains a matter of historical debate, in large part due to its significance for contemporary political and territorial issues. At the very start of Qing rule over China, the 5th Dalai Lama (1617 - 1662), who had himself just reunified Tibet after a period of disunity, came to Beijing to recognize the spiritual authority of the Qing emperors. In practical terms, however, Tibet functioned independently as it had under the Ming.

When the Dzungar Khanate invaded Tibet in 1717, the Qing sent an army to expel them and stationed officials called ambans in Lhasa. However, Qing rule remained very limited, although the Qing did in theory oversee the selection of reincarnations of the Panchen and Dalai Lamas (the Golden Urn system). They also intervened when Tibet was invaded by the Gorkhas from Nepal in the late 1780s - early 1790s and in another war against Nepal in 1855 - 1856, as well as several smaller engagements.

However, the Qing's ability to claim control over Tibet was severely weakened in the wake of the Opium War and multiple rebellions in other parts of China, including the Dungan Revolt (1862 - 1877), which included areas of the northeastern section of this map. The British and Russians both aimed to exert influence in Tibet as a part of their 'Great Game' competition for influence in Asia. By the 1890s, the British had the upper hand in the contest and tried to expand their influence in Tibet, which was resisted in Lhasa and Beijing, though for different reasons; Lhasa wanted to assert its independence and Beijing wanted to assert its control over Tibet. The British launched a military expedition in 1904 that captured Lhasa, resulting in a string of treaties favorable to the British and unfavorable to both Lhasa and Beijing. In its final years in the early 20th century, the Qing instituted a number of reforms to try to control Tibet, but when the dynasty collapsed in 1912 Tibet effectively became an independent country. The unresolved status of Tibet was only ended with its annexation and occupation by the People's Republic of China in 1950 - 1951 and the crushing of Tibetan uprisings in the late 1950s.

This map was published by

G.W.E. Atkinson (fl. c. 1859 – 1898) was a British military surveyor and expert on Tibet, the Himalayas, and Central Asia who worked with the Survey of India in the late 19th century. He first joined the Survey in 1859 and worked his way up the ranks, eventually becoming a Surveyor of the First Grade in the Drawing Office in Simla and later Assistant Superintendent of the same office in 1894, retiring in October 1898 and eventually receiving the rank of Esquire in 1901 in recognition of his services. He was considered an expert on 'transfrontier geographical mapping' and published several accounts of Indian and Tibetan pundits who had explored Tibet and neighboring regions for the British (most notably Narrative Account of Rinzin Nimgyl's Explorations in Sikkim , Bhutan and Tibet , in 1885-86). He also produced important maps on Kashmir (Map of Kashmir, 1873), Central Asia (Turkestan: and the countries between the British and the Russian dominions in Asia, first edition 1875), and a series of gazetteer maps. Learn More...


Carl Barich (1859 – 1931) was a German cartographer, often in the employ of August Heinrich Petermann, who was involved in the production of a large number of maps, primarily of India, China, and Africa, many of them for