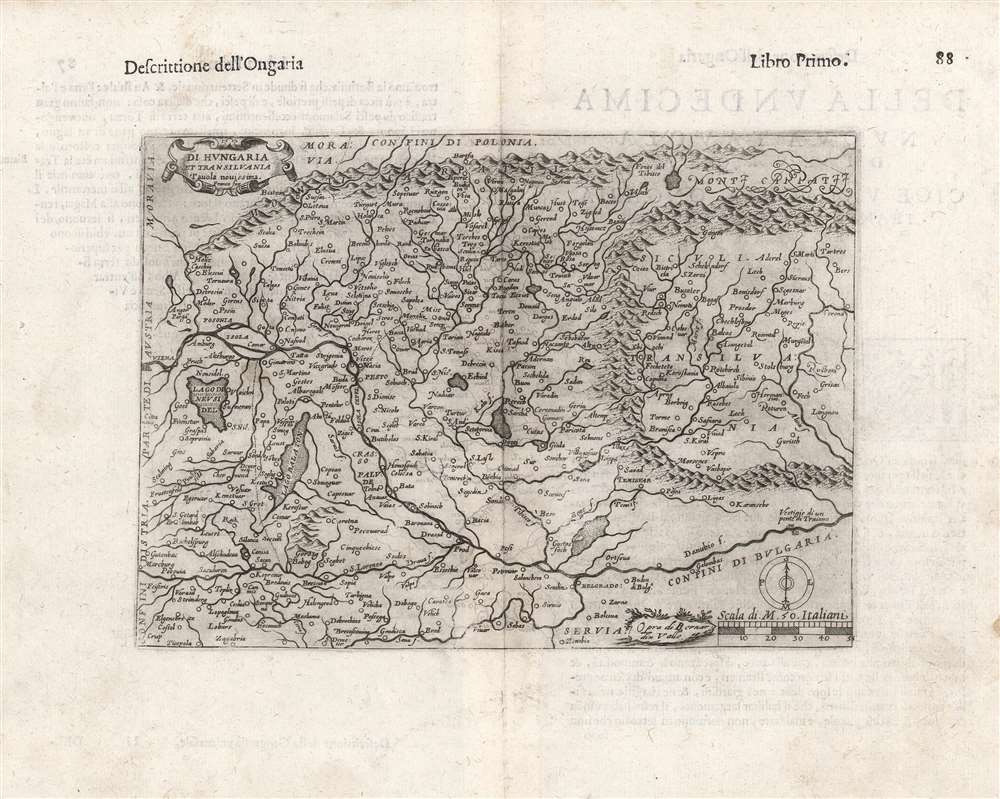 This is a rare 1597 map of Hungary and Transylvaniaby the Venetian mapmaker Giacomo Franco. The map is credited as the work of Bernardino Valle, that draftsman's sole known work. It is derived from the cartography of János Zsámboky, probably via the intermediary of Abraham Ortelius.

The map is focused on the course of the Danube stretching from Vienna to modern-day Romania and Serbia; the remains of Trajan's bridge across the Danube are marked. Vienna, Buda, Pest, and Belgrade are all marked and named.

The mountainous terrain is depicted pictorially and vigorously, particularly the mountains confining Transylvania in the eastern part of the map. Though small, an elegant cartouche graces the upper left, and the lower right includes a simple compass rose and the scale in Italian miles. Next to these is Valle's imprint, shown within a grassy cartouche.

This map first appeared in 1597, in Cesare Campana's Compendio historico delle guerre ultimamente successe tra Christiani e Turchi e tra Turchi e Persiani. The plate was promptly re-used, without change, in the 1598 Rosaccio edition of Ruscelli's Ptolemy. While the plate was not altered, the letterpress typography is distinctive, and in this case conforms to the Rosaccio printing. A further re-use of the map occurred in the Lasor a Varea Universus terrarum orbis scriptorum calamo delineates, printed in Padua in 1713. Rosaccio's Ptolemy is well represented in institutional collections, but this separate map appears to be rare. One badly miscataloged example appears in the Bibliothèque Nationale de France. Two examples belonging to the 1713 Lasor a Varea are also listed in OCLC.


Giuseppe Rosaccio (approx. 1530 - 1620) was a Venetian physician, astrologer, and geographer. He was born in the Venetian city of Pordenone, and graduated from the University of Padua having studied philosophy, medicine and law. He moved to seek his fortune in Tricesimo, where he worked as a physician and may have taught literature. His legal education led him to serve as a judge there in civil trials during the period between 1561 and 1575. 1607 found him in Florence in the service of Grand Duke Cosimo II (patron of Galileo). Rosaccio married, and had at least two children: Leonardo - who died on April 30, 1603 - and Luigi (also rendered as Alouisio), who collaborated with his father in his geographical work.

He was a prolific author, producing as many as forty works disseminating new knowledge (to a lay audience, using the Italian vernacular). These were mostly on the topics of astronomy and his primary interest, geography. He ventured afield on an array of subjects, including essays on Islam. He remains best known for his geographical texts, which were popular and republished in multiple editions. These included a 1598 edition of Ptolemy, a 1607 geography of Italy, and his final work - the 1610 Discorso nel quale si tratta brevemente della nobiltà, et eccellenza della Terra rispetto à Cieli, et altri elementi, was dedicated to Cosimo II and contained novel information on the American continent, including Drake and Cavendish' circumnavigations. This work included a map drawn by his son Alouisio. Learn More...


Giacomo Franco (1550 - c. 1620) was a Venetian engraver and publisher; in his will he described himself as 'desegnador,' and he was listed as a member of the Venetian painters' guild. He was the son of painter and engraver Battista Franco. He was regarded chiefly as an illustrator, being known mostly for two works describing Venetian costume. He published Giuseppe Rosaccio's 1605 Viaggio Da Venetia a Costantinopoli, and his imprint appears on at least one of the maps in that work - a general chart of the Turkish - held Mediterranean. He also contributed at least one map to Rosaccio's 1598 edition of Ramusio's Ptolemy, a modern map of Hungary and Transylvania. Tooley attributes a 1589 plan of Rome to him. Bifolco and Ronca identify many works belonging to Franco, including several plans of Venice, Rome, and a fine map of Cyprus. Learn More...