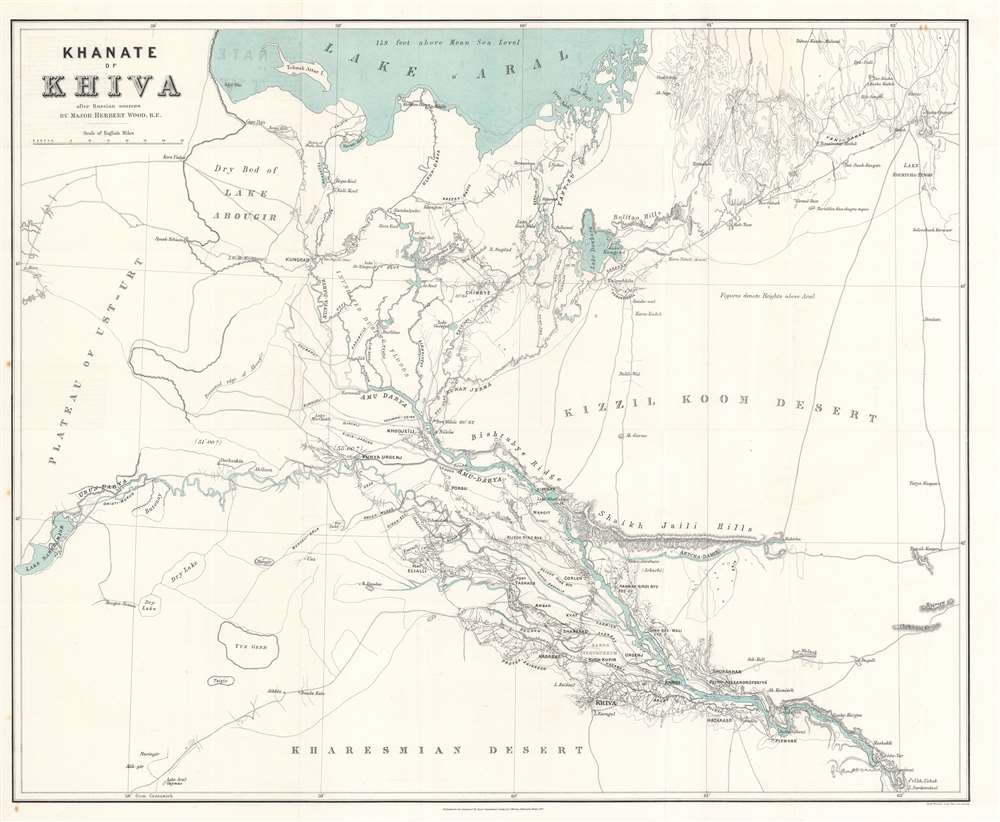 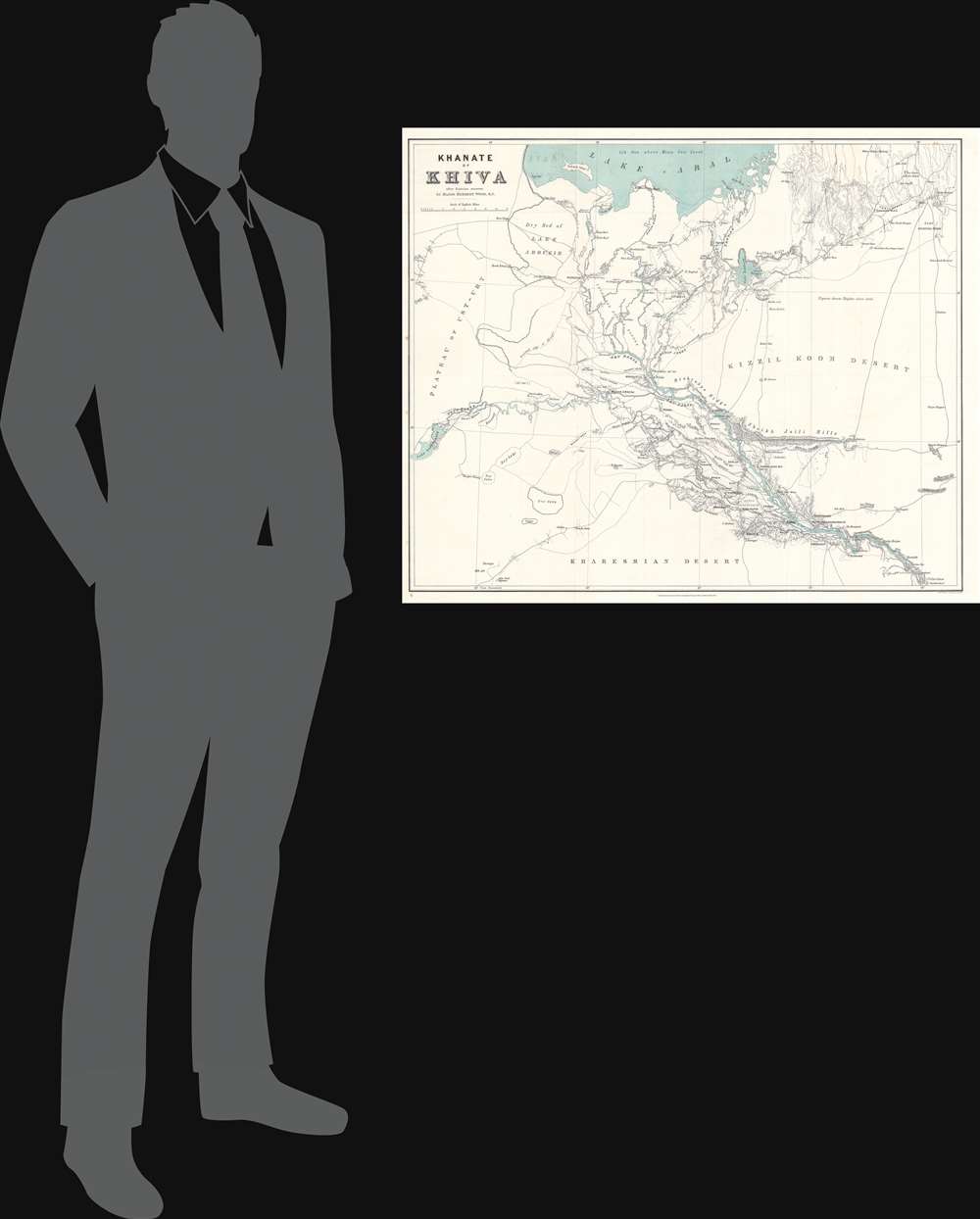 This is an 1875 Herbert William Wood map of the Khanate of Khiva in modern-day Uzbekistan - issued shortly after the 1873 Russian conquest of Khiva, a defining moment in the Great Game. Coverage extends from the southern coast of the Aral Sea (Lake Aral) south to the Kharesmian Desert. Great attention is paid to the all-important regional river network, particularly the Amu Darya (Oxus). Cities, towns, and villages are labeled, along with hills, lakes, and deserts.

The Khanate of Khiva

The Khanate of Khiva was an independent polity in the Amu Darya delta just south of the Aral Sea, active from roughly 1511 to 1920. The Khanate became a Russian protectorate in 1873, when the Tzar launched a massive invasion of Khiva. In 1920, following the 1917 Russian Revolution, Khiva followed course, establishing the Khorezm People's Soviet Republic, itself incorporated into the Soviet Union in 1924. Today the former Khanate it is mostly located in western Uzbekistan.

The Invasion of Khiva was a power-play in the Great Game that consolidated Russian suzerainty over the entirety of Central Asia north of Persia and Afghanistan (North of the Atrak and Amu Darya/Oxus Rivers). Subjugating Khiva was no minor challenge - Russia met with failure in two prior invasions. The city, located in a desert oasis some 200 miles south of the Aral Sea, had strong natural defenses. To assure troop movements and maintain logistical channels, Russian forces spent 3 years meticulously mapping approaches to Khiva before launching their campaign. When Russia finally invaded, five separate armies marched simultaneously, two from the east, and three from the west, consisting of some 12,000 soldiers in total. The armies converged at Khiva on June 7, 1873 and, after minimal fighting, the city surrendered on June 10. The successful conquest consolidated Russian power north of the Amu Darya or Oxus River. Turkmenistan, located to the south of the Amu Darya, fell 11 years later in 1884, securing Russian hegemony over the Trans-Caspian.

'The Great Game' was a diplomatic confrontation between the British and Russian Empires over Afghanistan and other territories in Central and Southern Asia. The conflict, rooted in long-standing animosity between Russia and Britain, revolved around Afghanistan, which, while lacking significant resources of its own, was strategically situated. For its part, Russia feared Britain making commercial and military inroads into Central Asia, an area long within the sphere of influence of St. Petersburg. Britain, conversely, feared Russia making gains in India, 'the jewel in the crown' of British Asia. The escalating tensions led to several wars and proxy wars: the First Anglo-Afghan War (1839 - 1842), the First Anglo-Sikh War (1845 - 1846), the Second Anglo-Sikh War (1848 - 1849), and the Second Anglo-Afghan War (1878 - 1880), along with the Russian annexations of Khiva, Bukhara, and Kokand. Then as now, Afghanistan proved a grinding stone upon which the world's great empires diminished themselves, none achieving a definitive victory despite committing staggering resources. The Great Game 'ended' on September 10, 1895 with the signing of the Pamir Boundary Commission Protocols, which stabilized the border between Afghanistan and the Russian Empire - but conflict persisted well into the 20th century. British General Frederick William Henry Walshe, c. 1907, wrote of the Central Asians, 'Some will fight for us, some against us, but all will fight.'

This map was created by Herbert William Wood, engraved by Edward Weller, and published by John Murray for the Royal Geographical Society. Two separate OCLC entries identify examples at The British Library and the Bibliothèque Nationale de France. A third example is located at Princeton University Library. Scarce to the market.

Herbert William Wood (July 17, 1837 - October 8, 1879) was a British army officer and engineer. Born in India, Wood was educated at Cheltenham College and then entered the East India Company military college at Addiscombe in February 1854. On September 20, 1855, Wood received his commission in the Madras engineers and then duly continued his professional education at Chatham. He arrived in Madras on October 26, 1857. He was posted to the Sagar field division and immediately saw action fighting against the Indian Rebellion of 1857. He received his promotion to lieutenant on August 27, 1859, and remained on the front lines until March 1859. He served as the executive engineer in the public works department in the North-West Provinces for a short time and then in 1860 was transferred back to Madras. On January 15, 1864 he was promoted to captain. From January through June 1868 he fought in the Abyssinian campaign as a field engineer and succeeded Captain Chrystie as the officer in charge of the works at Zulla. He was promoted to major on August 24, 1873. After obtaining three years leave, he became a member of the Grand Duke Constantine's expedition to examine the Amu Darya organized by the Imperial Russian Geographical Society. In 1876, Wood published a book on this expedition entitled The Shores of Lake Aral, which is said to be an essential read for 'all who would thoroughly understand the difficulties with which the Russians have to contend in Central Asia.' In June 1876, he returned to India and served in the Madras presidency. He died at Chingleput on October 8, 1879, after suffering from poor health for some time. Learn More...