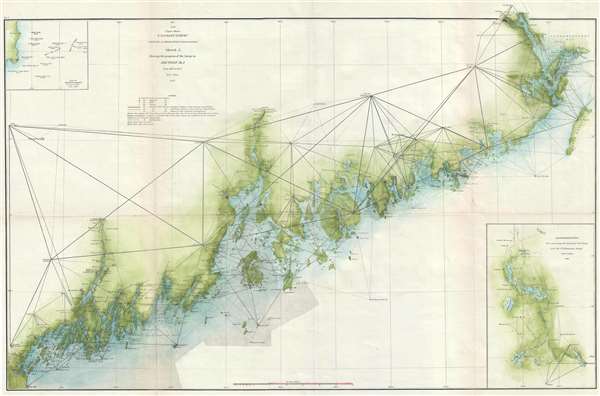 This is an 1871 U.S. Coast Survey nautical chart or maritime map of the coast of Maine. The map depicts the region from Portland Maine to Passamaquoddy Bay and inland as far as Bangor and Calais. Intricately charted, myriad coastal islands are illustrated and labeled, including Mount Desert Island and Grand Manan Island. Triangulation surveys crisscross the map, with the cities and towns of Portland, Bangor, Belfast, Castine, and Calais are labeled, along with numerous other locations throughout.

An inset map of Portland Harbor, surveyed in 1864, is situated in the upper left corner and an inset map of the Reconnoissance ro connecting the Survey of the Coast with the N.E. Boundary Survey, dated 1867, is located in the lower right corner. An small list of notes concerning the proper interpretation of the map is located at center, directly below the title.

This map was compiled under the direction of A. D. Bache and Benjamin Peirce, Superintendents of the Survey of the Coast of the United States.


Benjamin Peirce (April 4, 1809 - October 6, 1880) was a mathematician who taught at Harvard University for nearly 50 years. He served as director of the U.S. Coast Survey from 1867 to 1874. He made contributions to the fields of celestial mechanics, statistics, number theory, algebra, and the philosophy of mathematics. He was appointed professor of mathematics at Harvard in 1831, only two years after his graduation.

Bache, A. D., Report of the Superintendent of the United States Coast Survey, Washington, 1871.