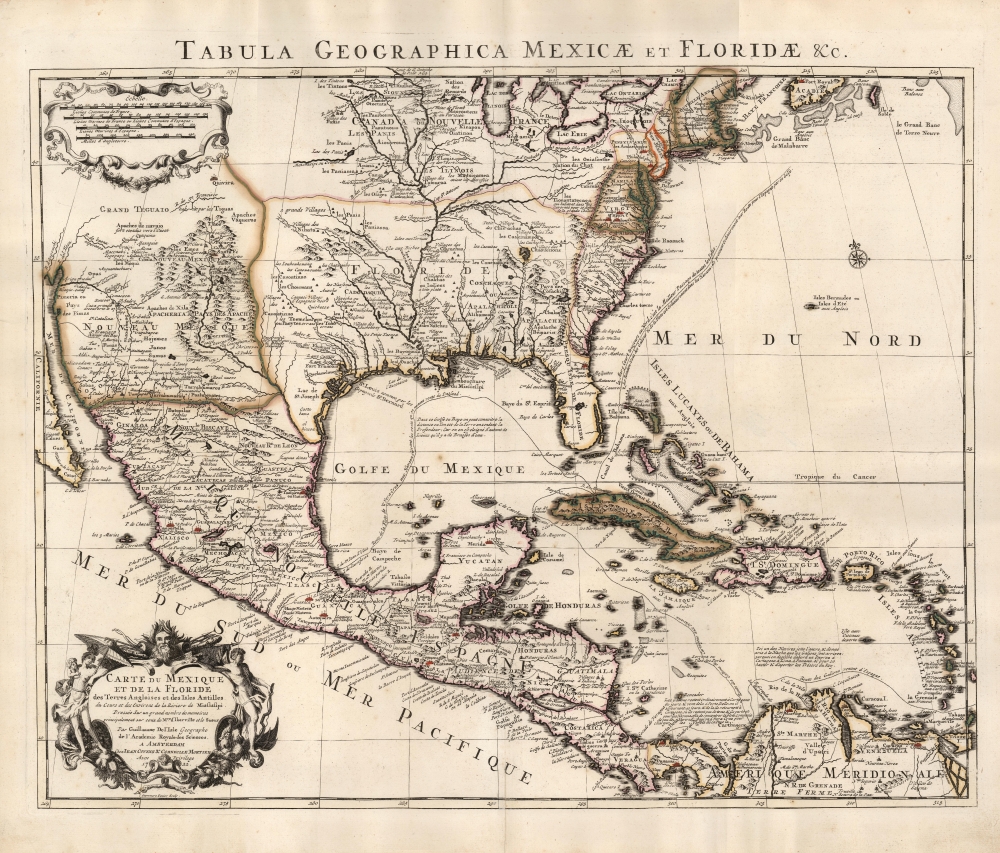 'A towering landmark along the path of Western cartographic development' ~ Wheat
$1,400.00

This is the 1722 Covens and Mortier issue of Guillaume de L'Isle's groundbreaking map of North America, focusing on Mexico, the Mississippi watershed and the West Indies. The map covers the area now comprising most of the continental United States, Mexico, Central America, and the West Indies. De L'Isle first publihed this map in 1703, at which point it was by far the most sophisticated map of the region obtainable. It was the first map to accurately denote the course of the Mississippi River, to accurately place the Great Lakes, and it was the first appearance on a map of numerous modifications from the explorations of La Salle, Bienville, and D'Iberville.

The Parisian De l'Isle, having already reissued the map in France, contracted with the Amsterdam publishers Covens and Mortier to produce this edition, one of the few authorized variants on this often-copied map. This Amsterdam edition was expertly engraved to a new plate by Jan Heeren Stemmen, whose work appeared on a number of Covens and Mortier's maps.

The territories assigned Mexico here, of course, extend far to the north (indeed, continuing off the map.) The detail includes New Mexico's missions along the Rio Del Norte, including Taos and Santa Fe. Beyond the narrow valley attached to the Rio de Norte, however, the region is only tenuously mapped. The mythical Kingdoms of Gold, Quivara and Teguayo are noted just under the scale cartouche. The empire of Gran Teguayo appears in the unmapped region to the northwest of Santa Fe. Teguayo was identified as one of the Kingdoms of Gold presumed to be found in the unexplored American west. The name Teguayo first appears in the Benevides Memorial, where it is described as a kingdom of great wealth to rival Quivara, another mythical kingdom just north of Taos. The idea was later popularized in Europe by the nefarious Spaniard and deposed governor of New Mexico, the Diego Dionisio de Peñalosa (1621 - 1687), who imagining himself a later day Pizzaro, promoted the Teguayo legend to the royalty of europe. Originally Teguayo was said to lie west of the Mississippi and north of the Gulf of Mexico, but for some reason, De L'Isle situates it further to the west.

The massive area marked out as 'Floride' here - including as it does the Mississippi watershed, on up to the New France and the Great Lakes - represents Floride Francois, the French claims that would extend even to the modern day South Carolina – Georgia region.

The basis for this map was published by Guillaume De l'Isle in 1703, thereafter to be widely copied. This authorized edition was engraved by Jan Stemmen in 1722 on behalf of Covens and Mortier to be included in their atlases, and it remained in print for much of the rest of the century. It is well represented in institutional collections.


Jan Heeren Stemmen (1695 - 1734) was a Dutch engraver in Amsterdam whose work was published by the firms of Covens and Mortier, Bilhamer, Heyman van Dyck, and Ottens. No details of his early life or education have come down to us, though he appears to have been moderately successful: he married Jannetje de Hoonet at a young age, and is known to have fathered two children; a daughter, Anna in 1712 and a son Jan in 1716. Learn More...