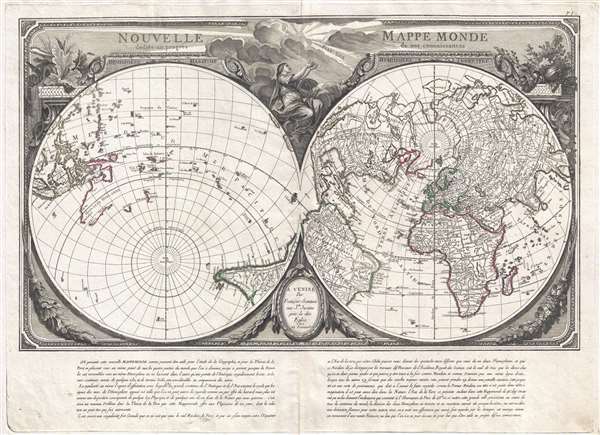 Fascinating map the divides the world into terrestrial and maritime hemispheres and argues for a Paris Prime Meridian.
$1,800.00

An impressive and unusual 1784 map of the world on dual polar projections by François Santini and the Remondini family. This map was originally drawn by Nicholas-Antoine Boulanger and published in Paris by Chez R. J. Julien in 1753. Boulanger divides the world into separate hemispheres, a Hemisphere Maritime and a Hemisphere Terrestre, asking the question, why is most of the world's land mass limited to only one half of the sphere? The map simultaneously lionizes France by emphasizing that this unique projection is possible only when the prime meridian runs through Paris. The finely engraved allegorical surround, notably striking even compared to other maps of the period, was drawn by Pierre Philippe Choffard (1730 - 1809) and succeeds in underscoring the map's underlying Franco-centric argument.

This map is of particular interest for its treatment of the North Pacific. When Boulanger originally drew this map, the Northern Pacific region was largely unexplored and its geographical deportment a subject of hot debate in the scientific academies of London, Paris, and St. Petersburg. These debates yielded speculative geographies that included such cartographic myths as the Sea of the West, the lakes of Admiral De Fonte, Muller's Peninsula, apocryphal islands, and more. Published after Captain James Cook's final voyage, but before the widespread dissemination of the new information it produced, this map embraces many of those theories. In the Pacific northwest, the mythical Sea of the West (Mer de L'Ouest) and the apocryphal discoveries of Admiral de Fonte are illustrated, and just west of Kamchatka, where a large speculative island is identified.

A magnificent sea, called the Sea of the West, or in this case the Mer de L'Ouest, occupies the greater part of the northwestern part of the continent. This body of water was speculated by Philippe Buache and Jospeh-Nicolas De l'Isle in the early 18th century based upon wishful thinking, American Indian stories, and the somewhat questionable 16th century explorations of Juan de Fuca - themselves possibly an attempt by the known pilot de Fuca to lay claim to suppressed information associated with Drake's voyages. Here the cartographer gives the Mer de L'Ouest a transitional expression, not so grand as on the Buache / De L'Isle map, nor so bay-like as the Nolin variant. The cartographer specifically does not connect the Mer de L'Ouest to either the factual network of lakes and rivers extending westward form the Hudson Bay or to the speculative De Fonte network just to the north.

The tale of De Fonte's discoveries in the American Northwest is particularly interesting. The De Fonte legend first appeared in a 1706 English publication entitled Memoirs of the Curious. This short-lived magazine published a previously unknown account by a supposed Spanish Admiral named Bartholomew de Fonte. De Fonte is said to have sailed up the Pacific coast of North America in 1640. On this voyage he apparently discovered a series of gigantic lakes, seas, and rivers heading eastward from the Pacific towards Hudson Bay. On one of these inland lakes, he supposedly met with a westward bound ship from Boston that could only have come through the Northwest Passage. Today, based upon many inaccuracies and falsities, we know the entire De Fonte article to have been a fabrication, nonetheless, it set 18th century afire with speculation that a Northwest Passage must indeed both exist and be navigable. Benjamin Franklin and others wrote long defenses of De Fonte. Our map offers an uncommon variant on the De Fonte passage, positioning its western entrada well to the north in order to accommodate the Sea of the West and situating its outlet at the Baffin rather than the Hudson Bay.

The representation of Australia Nouvelle Hollande is also of interest. At the time, the full extent of Australia was completely unknown. There was some speculation that it must connect with Tasmania, New Zealand, and New Guinea, but no solid cartographic evidence of this, or to the contrary, was forthcoming until the expeditions of James Cook.

This map was originally published in Paris by R. J. Julien in 1753 and, at the same time, in Nuremburg by Homan Heirs. It was subsequently issued again, with minimal changes, by Chez Lattre in 1760. The plates were acquired by François Santini, who published an edition in Venice in 1778. The present example is the last edition, 1784, Remondini Venice edition.

Nicolas-Antoine Boulanger (November 11, 1722 – September 16, 1759), sometimes spelled Boullanger, was a French mapmaker, scientist, mathematician, and philosopher active in Paris during the middle part of the 18th century. Boulanger was the son of a Paris paper merchant. He studied mathematics and became an engineer before turning to the study of oriental languages and philosophy. Boulanger is responsible for several works, including an influential work on geology entitle Les Anecdotes de la Nature. Much of his work is controversial and included criticisms of the Catholic Church, St. Paul, and Christianity in general, and consequently was either never published or published posthumously.


Francois [Francesco] Santini (fl. 1776 - 1784) was an Italian cartographer and map publisher based in Venice. Francois Santini is often confused with Paolo Santini, a Venetian engraver also known for religious prints and cartographic work. Scholarship is unclear whether these are related individuals, the same person, or completely unrelated. Both cartographers were active in roughly the same period and reissued maps of earlier French cartographers ranging from Vaugondy, to Jaillot, to De L'Isle, to D'Anville. Both cartographers also worked with the Venetian Remondini publishing house. Paolo was possibly an Abbot. Francois Santini seems to have worked extensively in Paris and is associated with several French cartographers of the late 18th century including Rigobert Bonne. His offices in Paris were located at Rue St. Justine pres de L'Eglise. In the 1780s Francois Santini published an atlas, the Remondini Atlas Universel, in conjunction with the Remondini family of Venice. The Library of Congress associates this work with Paolo Santini - leading to still more confusion.


Remondini (fl. c. 1657 - 1861) were a family of printers who worked originally based in Bassano del Grappa, near Venice. Giovanni Antonio Remondini (1634-1711), the family patriarch, was born in Padua in 1634. In 1657, he took a home the main square of Bassano where he opened a shop drapes, wool, silk and iron tools. He also sold woodcuts of saints which proved popular with local farmers who believed they bought spiritual protection. When Giovanni died in 1711 his printing business fell into the hands of his son, Joseph Remondini. In 1750 Joseph expended the family business into Venice proper. Having several paper factories established by Giovanni Antonio, the Remondini were in a position to undercut competitors in Venice. The Remondini employed a number of talented engravers, including Paolo Santini, an Abbot who specialized in sacred images as well as cartography. Their corpus includes several beautifully produced atlases, though, cartographically speaking, little in the way of original work. The family fell into decline following the Napoleonic invasions, finally closing their doors in 1861. Most of the Remondini family's work is today preserved in the Museum of Bassano del Grappa and the Piccolo Remondini Museum of Vicenza.