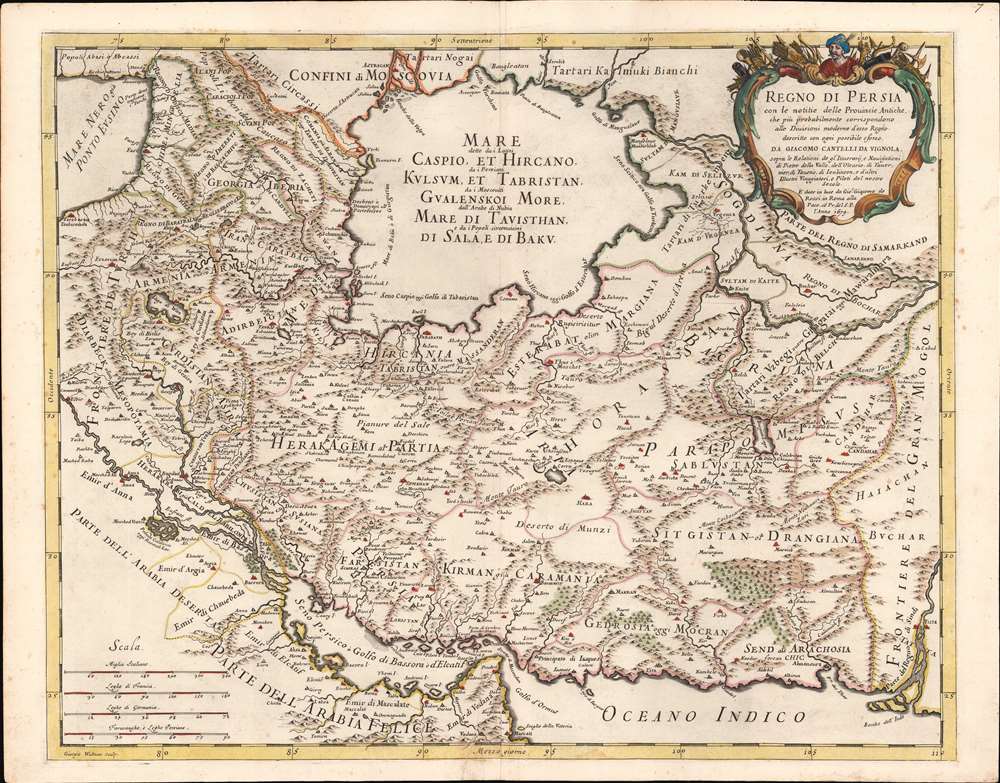 This is a rare 1682 Cantelli da Vignola map of the Kingdom of Persia, incorporating modern day Iraq, Iran, Afghanistan and Uzbekistan. The map is unusual in its depiction of an eastern border to the Persian empire, here bordering the Mogul Empire. The map overall is notable for Cantelli's attempt to reconcile conflicting classical information of what was an essentially unfamiliar region, with what was at the time up-to-date geographical data. Cantelli synthesizes a variety of travel accounts and early maps, including those of Pietro della Valle (1586 - 1652), and Adam Olearius (1603 - 1671). Throughout the map, contemporary place names are printed alongside historical names, or those used by other peoples: for example, the name for the Caspian Sea is given in Latin, as well as transliterated Russian and Arabic, from the local name.

Beginning to Correct the Caspian

Almost all maps of this region produced in the 16th and 17th centuries followed the model of Claudius Ptolemy in showing the Caspian Sea as oval-shaped, widest on its east-west axis with the ancient Oxus, or Amu Darya river, flowing into its southeast quarter. The first map to correct this was that of Adam Olearius (1603 - 1671), whose 1647 map much more accurately mapped the Caspian's western shore, and was first to diverge from the Ptolemaic oval form. Cantelli's revision adds more detail to the Oxus river and what may be the Syr Darya, suggesting the eastern extent of the Caspian as shown here may actually be the shores of the Aral Sea. The Turkic tribal population surrounding the Caspian and Aral regions were notoriously aggressive to outsiders, and Europeans would remain ignorant of the true form of the Caspian Sea until well into the 18th century. It is very possible that the early, wide depiction of the Caspian represented a conflation of the Caspian and the Aral Seas. The ancient connection of the Oxus/Amu Darya to the Caspian would tend to support this contention, as that river actually did empty into the Aral. (Although for brief historical periods, the river was actually diverted to the Caspian with a dam.)

The Persian Gulf (shown as 'Golfo di Bassora' and 'Golfo d'Elcatif') is presented much smaller than fact, but improves on the detail over most contemporary maps. Bahrain is named (both a city on the mainland, 'Bahruin,' and an island, 'Baeren I. '

Cantelli’s maps, notably their cartouches, were some of the most attractively engraved of the later 17th century. The present map is no exception: a superbly executed copperplate engraving, the work of German engraver Giorgio Widman, whose imprint appears in the lower left. The map is distinctive in its hachured coastlines, pictorially represented mountains and forests, and clear elegant typography. The cartouche is surmounted with the bust of a Persian emperor, possibly Shah Abbas, and decorated with bows, arrows, spears, and other arms emphasizing the presumably warlike nature of the Shah's empire.

This map was drawn by Cantelli, and engraved in Rome by Giorgio Widman for De Rossi's publishing house. It was probably issued as a separate until the publication of De Rossi's Mercurio Geografico in 1688. We count fifteen examples of the Mercurio Geografico in institutional collections. The separate map appears catalogued only by the Bibliotheque National de France, and the Biblioteca Nacional de Espana.


Giorgio Widman (fl. 1672 to 1682) was a celebrated map and lettering engraver, who worked primarily with the De Rossi publishing house. He is perhaps best known for having executed the lettering of Giovanni Battista Falda's superb 1675 map of Rome. Learn More...