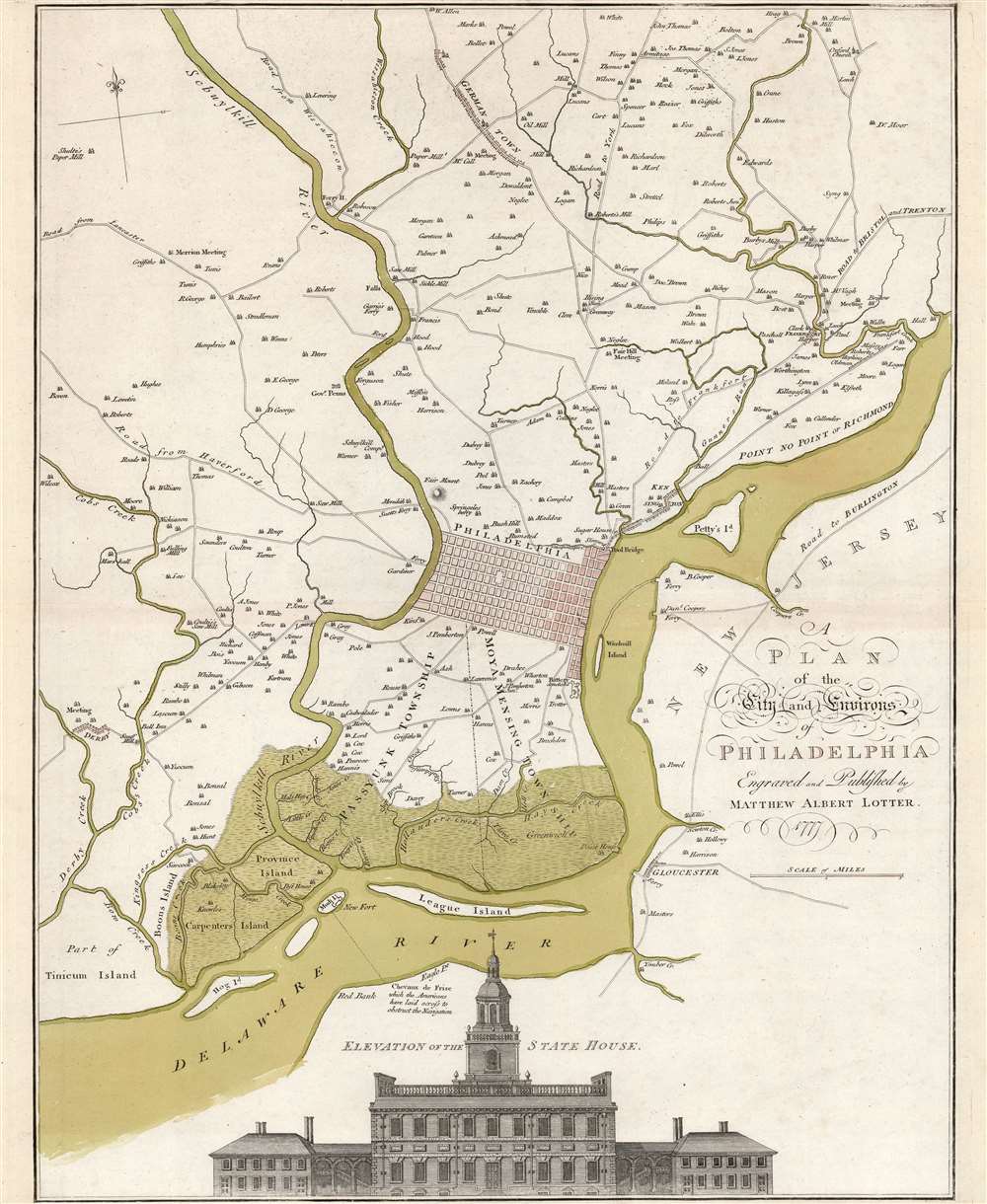 This is Matthäus Albrecht Lotter's beautiful 1777 edition of the Scull and Heap map of Philadelphia and its environs, an essential Revolutionary War (1775 - 1783) map. The map represents the pinnacle of Philadelphia area cartography when it was the capital of the American Revolution and, as this map went to press, a focus for global attention. Lotter likely published the map to capitalize on German interest in the war. German Hessian mercenaries fought on behalf of the British as early as the August 15, 1776 landing at Staten Island and throughout the remainder of the War.

The map centers on Philadelphia, reflecting Thomas Holme's 1682 urban plan. The surrounding region, from Hog Island in the Delaware River up to just beyond Germantown, is shown in sharp detail with roads, towns, mills, inns, ferries, bridges, and the country homes of prominent Pennsylvanians. The Quaker heritage of the area is highlighted by the presence of meeting houses throughout.

The map also includes notes directly relevant to the war - American barriers to navigation along the Delaware, for example, and notes of demolished British batteries. These and other features identify Lotter's source as the 1777 William Faden map, which included those details for the first time. Lotter, publishing in Augsburg, has retained the English nomenclature and text of Faden's original map lacking only the English edition's Table of Distances. Also preserved in this engraving is a perspective view of Philadelphia's State House, known today as Independence Hall.

The Scull and Heap Map

Faden's map was only the most recent iteration of a map which had made its first appearance more than twenty years prior. Drawn by Philadelphia surveyor Nicolas Scull and engraved by George Heap, the map and a version of the perspective view of Independence were printed in America in 1752. Only five examples of the American edition of the map are known to have survived. The view and map were swiftly copied and published in reduced format in the September 1752 and August 1753 issues of the Gentleman's Magazine.

With the advent of the Revolution, interest re-manifested in Philadelphia, capital of the new nations. Despite the passage of time, Scull and Heap's mapping of the region remained the best relevant. Consequently, William Faden's 1777, London-published map was largely faithful to the Scull and Heap original. Nonetheless, there were significant differences. Faden's production was larger and included details from Joshua Fisher's chart of the Delaware River. His work also shaded in portions of the Philadelphia grid to indicate the growth of the city. Faden updated his map at least three times, incorporating the changing details of the reduction of Philadelphia's British defenses and the addition of her American ones. Lotter, moving with remarkable speed, based the present map on the third state of the Faden, with minimal changes, despite crediting neither Faden nor Scull and Heap. Whilst the Faden seldom sports color, the Lotter is embellished with expert wash color and red tinting to highlight Philadelphia's grid.

This map was engraved by Matthäus Albrecht Lotter in Augsburg, 1777. The map was sold both as a separate issue and as an add-on to some Lotter atlases. We see eight examples of the separate map catalogued in OCLC. Scarce to the market.

Nicholas Scull II (1687 - 1761) was an American surveyor and cartographer; he was Surveyor General of Pennsylvania between 1748 and 1761. He was born in Philadelphia; his father, also a surveyor and also Nicholas, had taken part in the layout of the Old York Road; Nicholas II assisted in the project. He apprenticed under Thomas Holme, Pennsylvania's first Surveyor General. Nicholas II was appointed Deputy Surveyor for Philadelphia in 1719. When Benjamin Franklin founded his mutual improvement club, The Junto, Scull was made one of the twelve founding members. Scull would in 1733 be appointed deputy surveyor of Bucks County. His surveys included the Schuylkill and Lehigh Rivers, the Delaware Water Gap, and the 1737 Walking Purchase. Having served a stint as Philadelphia County sheriff, he replaced William Parsojns as Surveyor General. As such he produced several maps of the vicinity around Philadelphia, as well as the monumental 1754 East Prospect of the City of Philadelphia. Learn More...


George Heap (1715 - 1752) was a Pennsylvania landholder and county Coroner, who was additionally an assistant surveyor-general for the province, a mapmaker, and mapseller. He is most noted for his drawing the most important early view of Philadelphia - The East Prospect of the City of Philadelphia - as well as his Map of Philadelphia and Parts Adjacent with Perspective View of the State House, 1750 The Prospect was, apparently, the death of him: He finished drawing the view in September 1752 and set out in early December of that year for England in order to have it engraved. His voyage had not exited the Delaware before he 'was seized with a pain in his head and died'. He was buried at Christ Church, Philadelphia. Learn More...


Matthäus Albrecht Lotter (1741 - 1810) was a German engraver and map publisher; he and his brothers inherited the firm from their father, Tobias Conrad Lotter (1717 - 1777) who in turn had inherited the firm of Matthäus Seutter. T. C. Lotter and his sons Matthäus Albrecht, Georg Friedrich, (1744-1801) and Gustav Conrad (1746 - 1776) succeeded in building on the economic success and professional reputation of Seutter's work. Eventually Lotter became one of the most prominent mid-18th century map publishers working in the German school. After the elder Lotter's death in 1777, the business was taken over by Matthäus Albrecht and Georg Friedrich two eldest sons. Despite their best efforts, they lacked their father's business acumen, and the firm began a slow decline. It was nonetheless passed on to a subsequent generation of Lotters, Gabriel (1776 - 1857) and Georg Friedrich (1787 - 1864), who pushed it into further decline until it faded out in the early-19th century. Learn More...

Very good. Trimmed close at top and bottom, but no loss. Some scuffing to upper right-hand border. Else excellent. Original wash color.