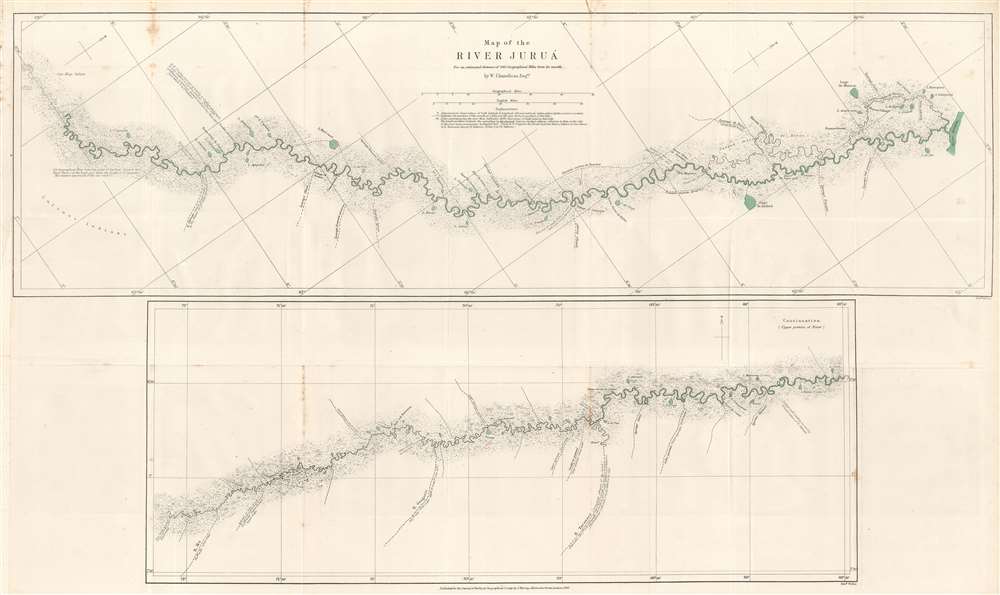 First detailed map of the Juruá River, one of the longest tributaries of the Amazon.
$250.00

This is an 1869 William Chandless map of the Juruá River. The map divides the Juruá into two sections. The upper map illustrates the Juruá from its confluence with the Amazon to a point near Lake Ocoá. The lower map illustrates the upper portion of the river from Lake Ocoá to the point where the expedition reversed course. Small black crosses mark astronomical observations, and the dashed lines indicate the mouth of a lake or tributary. Chandless includes comments on the nature of the tributaries, and also notes the locations of the few tribal villages he encountered.

The Chandless Expedition and the Juruá River

The Juruá is 1,500 miles long and navigable for 1,133 miles above its confluence with the Amazon. Chandless surveyed 980 miles before his crew, for fear of Amazon Indian attack, compelled the expedition to turn around. Even though Chandless did not reach the Juruá's source, this expedition provided the first significant science-based reconnaissance of the river, its banks, and its course.

This map was created by William Chandless and Edward Weller and published by John Murray for the Journal of the Royal Geographical Society in 1869. We are aware of one other instance when the separate map appeared on the private market.

William Chandless (November 7, 1829 - May 5, 1896) was an English explorer. Chandless graduated from Trinity College, Cambridge, with high honors, and then studied law for two years before realizing that the law wasn't for him. In 1854, Chandless was in the United States along the Missouri River watching Mormons travel west to Utah by covered wagon. Since he was barred from joining them, Chandless hired a 'teamster' at $25 a month. He chronicled this journey in a landmark travel narrative A visit to Salt Lake, and a Residence in the Mormon Settlements of Utah. After leaving Salt Lake, he continued west to Los Angeles and San Francisco. From San Francisco he traveled to Acapulco. He then crossed Mexico and returned to England. Chandless first left for Brazil in 1858, but did not stay long as he was in Argentina the following year during the great earthquakes in Mendoza. From there he crossed the Andes to Chile, and from Valparaiso he continued on to Peru and Ecuador. He traveled from Ecuador to Colombia in 1861, and was detained several times by different factions vying for control of Colombia. Chandless took up residence in Manaus, Brazil, soon afterward, and lived there for years. He based numerous explorations of the southern tributaries of the Amazon River from Manaus, including an ascension of the 1,866-mile course of the Purus River, for which the Royal Geographical Society awarded him its Patron's Medal. Chandless contacted a number of indigenous tribes and explored several of the Amazon River's southern tributaries. In 1867, Chandless recorded a few words of Arawá, an extinct language for which the Arauan language group is named. Without this list compiled by Chandless, all record of this language would have been lost. In 1868, Chandless accomplished a thorough survey of the Juruá River, ascending its 1,133-mile course. Over the course of his years in the Amazon, Chandless surveyed over 5,000 miles of main streams and branches of the Amazon River. Learn More...