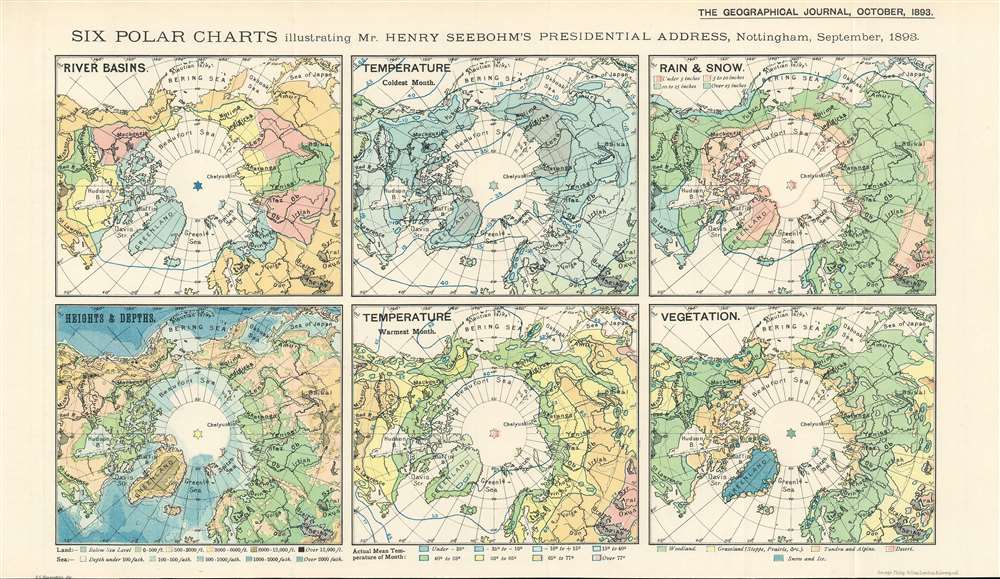 Comprised of six charts on one sheet illustrating rain and snow fall, temperature, river basins, and vegetation in the Arctic Basin.
$250.00

This is an 1893 Ernst Georg Ravenstein map of the Arctic consisting of six small maps printed on one sheet created to help illustrate Mr. Henry Seebohm’s address to the Royal Geographical Society. Each map illustrates a different aspect of the Arctic Basin, with a map focusing on river basins, temperature (coldest month), rain and snow, heights and depths, temperature (coldest month), and vegetation. An incredible amount of detail is present on each map. For example, four different colors are used to illustrate variations in precipitation and temperature in three of the maps, while five colors are employed to highlight different vegetation zones. The map detailing heights and depths, which would more traditionally be referred to as a topographic map, very much resembles other maps within that genre.

This map was created by Ernst Georg Ravenstein, printed by George Philip and Son, and published by the Royal Geographical Society in the October 1893 edition of The Geographical Journal. Only one example is catalogued in the OCLC, and it is part of the institutional collection at The British Library.