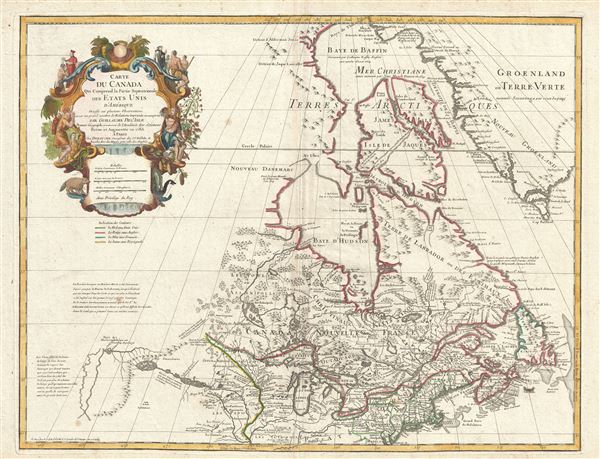 Beautifully illustrates the intriguing discoveries of the Baron Lahonton.

This is the 1783 Dezauche issue of Phillipe Buache and Guillaume D L'Isle's important map of northern North America. The map covers the United States north of the Chesapeake and Canada or New France. De L'Isle first issued this map in 1703. At the time it was the most sophisticated cartographic representation of this region yet published, referencing various elements from the most recent explorations including the Jesuit Relations, Pierre Le Moyne d'Ibervile, Pierre Le Sour, and Baron de Lahonton.

At the close of the American Revolutionary War, in 1783, Dezauche, Buache and De L'isle's successor, redrew the classic 1703 map to represent the new borders between english, Spanish and United States territories established by Treated of Paris. Here the United States territory begins in the northwest at the sources of the Mississippi. The border then extends eastward through the Lake of the Woods to bisect Lake Superior, Huron, eire, and Ontario (leaving Michigan or, as here, 'Lac des Illinois,' fully in U.S. territory). eastward of the Great Lakes the border passes northwest along the St. Laurence before cutting east to divide Lake Champlain. It then follows the headlands to the Riviere Sainte-Croix which exits into the Atlantic. To the west the United States border is set along the Mississippi River.

One of this map's most intriguing elements is De L'Isle's treatment of the speculative explorations of the Baron Louis Armand de Lahonton, which dominate the lower left quadrant. Lahonton (1666-1715) was a French military officer commanding the fort of St. Joseph, near modern day Port Huron, Michigan. Abandoning his post to live and travel with local Chippewa tribes, Lahonton claims to have explored much of the Upper Mississippi Valley and even discovered a heretofore unknown river, which he dubbed the Longue River. This river he claims to have followed a good distance from its convergence with the Mississippi. Beyond the point where he himself traveled, Lahonton wrote of further lands along the river described by his guides. These include a great saline lake or sea (ghosted in here) at the base of a low mountain range. This range, he reported, could be easily crossed and from this point further rivers flowed westward to the mysterious lands of the Mozeemleck, and presumably the Pacific. Lahonton's work has been both dismissed as fancy and defended as erroneous speculation by various scholars. Could Lahonton have been describing indigenous reports of the Great Salt Lake? What river was he on? Perhaps we will never know. What we do know is that on his return to europe, Lahonton published his travels in an enormously popular book. Lahonton's 1703 book inspired many important cartographers of his day, Moll, De L'Isle, Popple, Sanson, and Chatelain to name just a few, to include on their maps both the Longue River and the saline sea beyond. The concept of an inland river passage to the Pacific fired the imagination of the French and english, who were aggressively searching for just such a route. Unlike the Spanish, with easy access to the Pacific through the narrow isthmus of Mexico and the Port of Acapulco, the French and english had no easy route by which to offer their furs and other commodities to the affluent markets of Asia. A passage such as Lahonton suggested was just what was needed and wishful thinking more than any factual exploration fuelled the inclusion of Lahonton's speculations on this and many other maps. De L'Isle, to his credit, expresses he doubt about Lahondon's discoveries noting:

Lahonton [may have] invented all of these things, which is difficult to resolve as he was the only one to visit these vast lands. [our own translation]

As it may be, this map proved highly influential and was one of the best maps of this region until the explorations late 18th and early 19th century. A decorative title cartouche in the upper let quadrant features stylized New World fauna, including a beaver, and missionaries converting indigenous American Indians. This map was published in J. Dezauche's 1789 reissue of G. De L'Isle and P. Buache's Atlas Geographique et Universel.