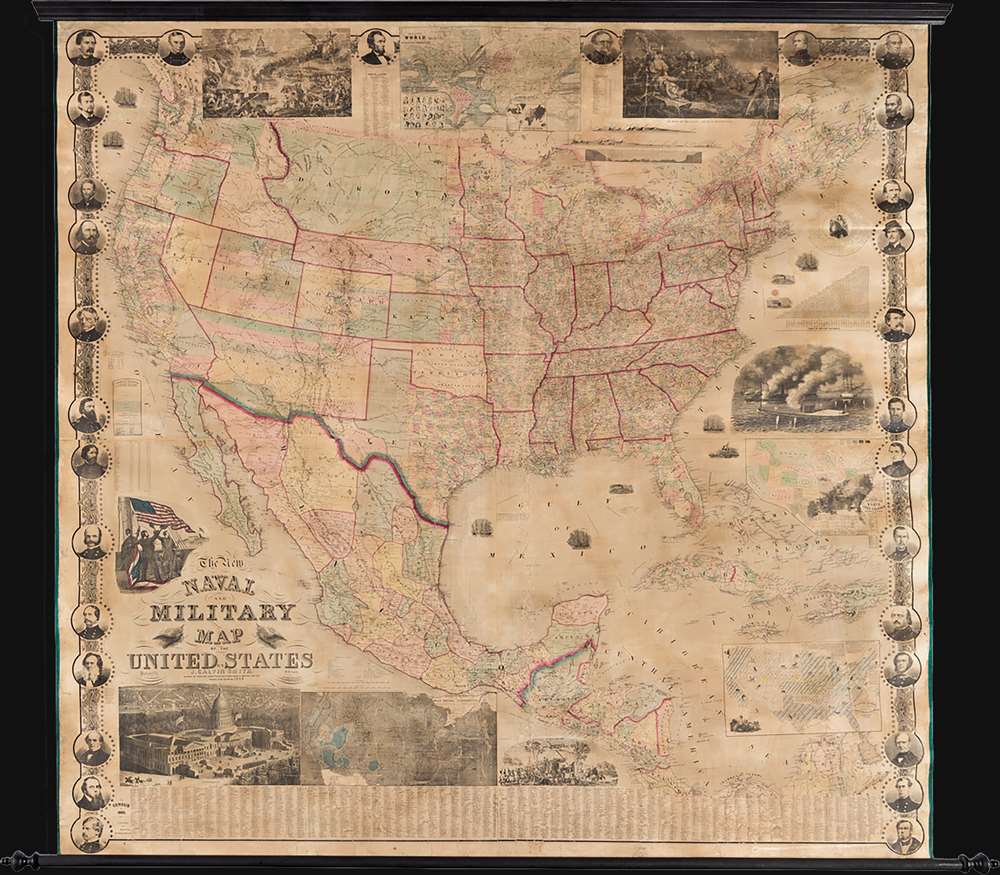 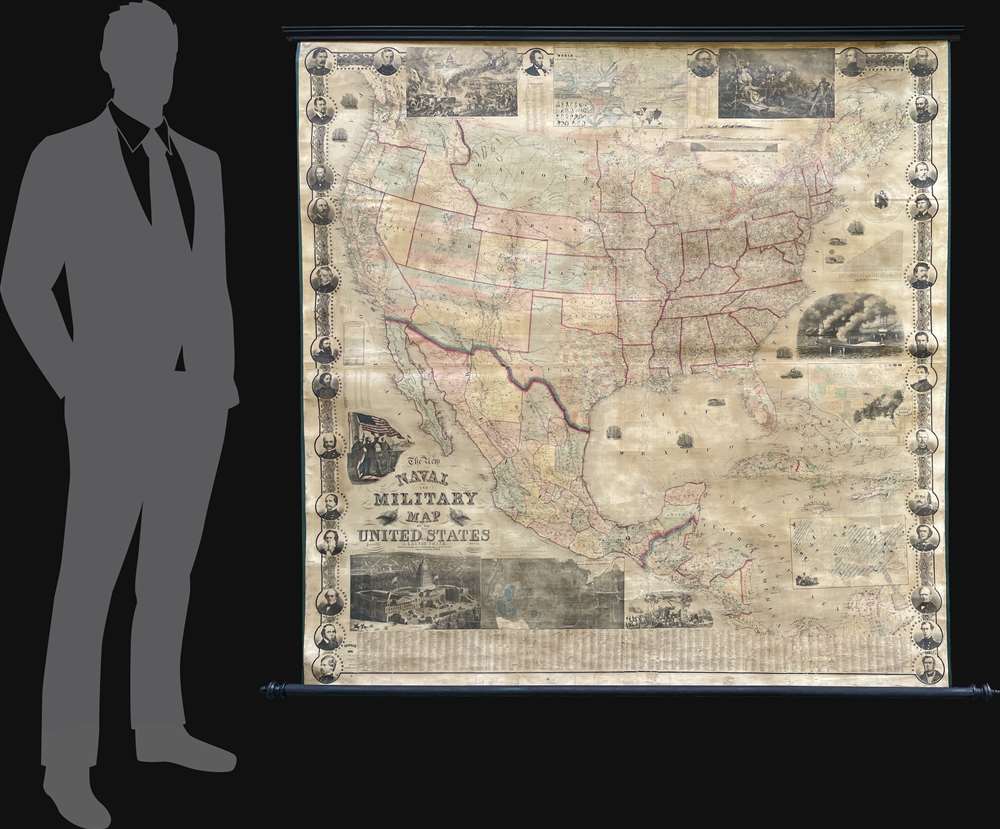 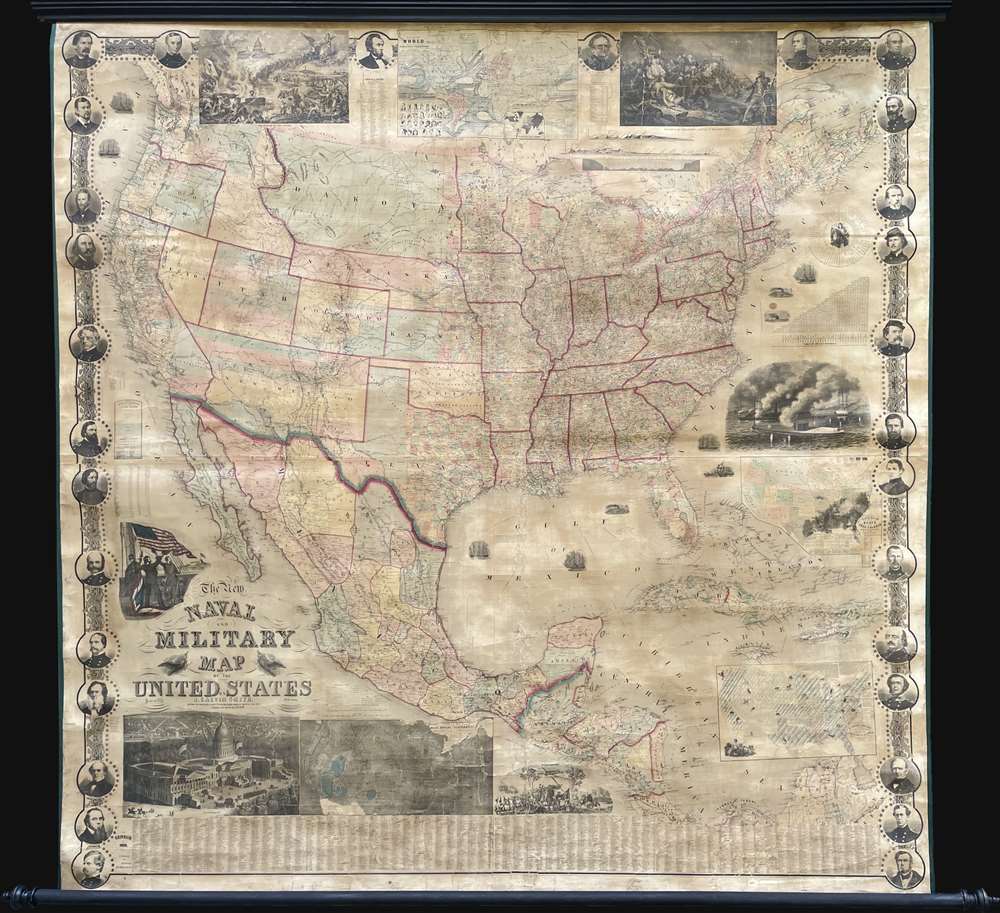 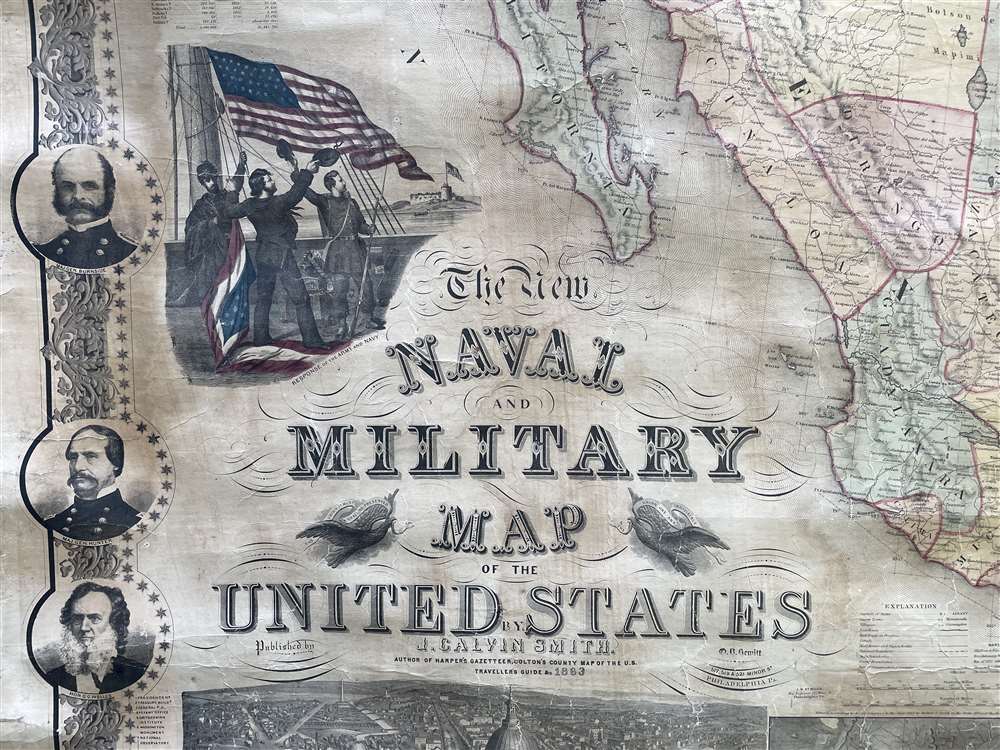 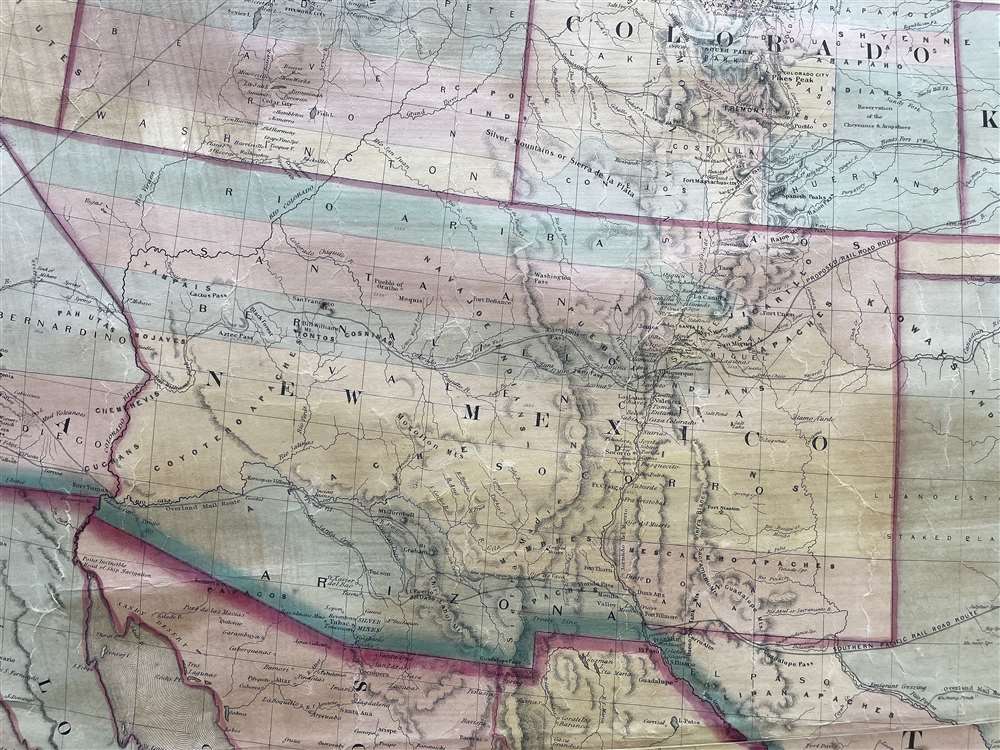 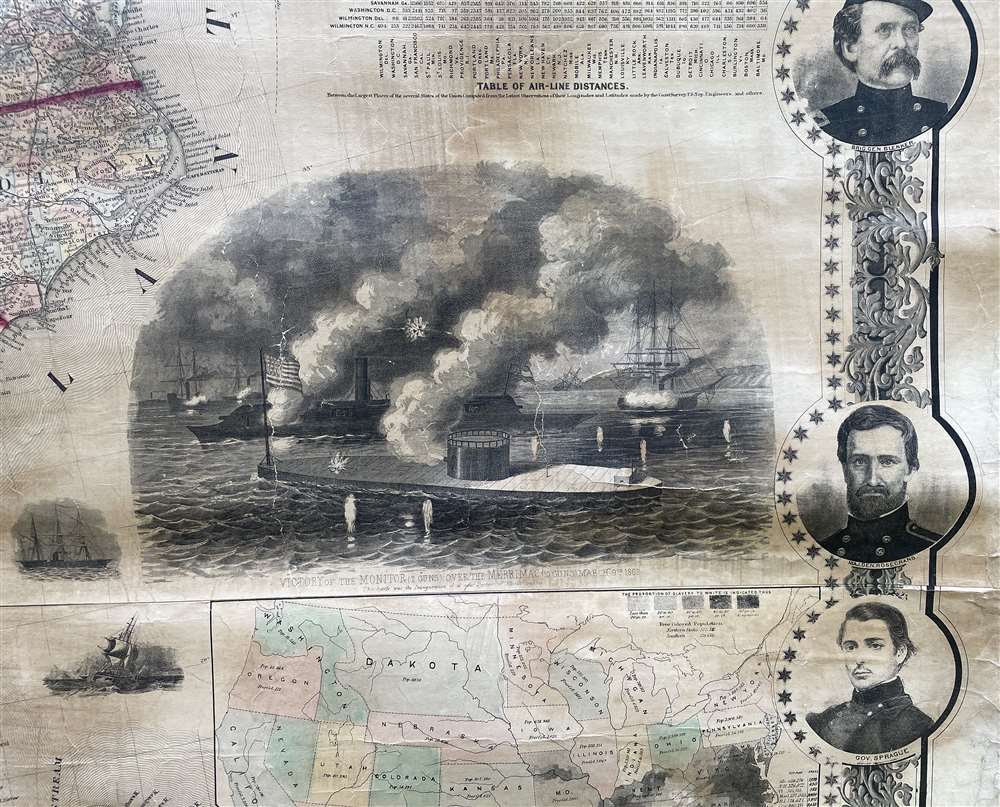 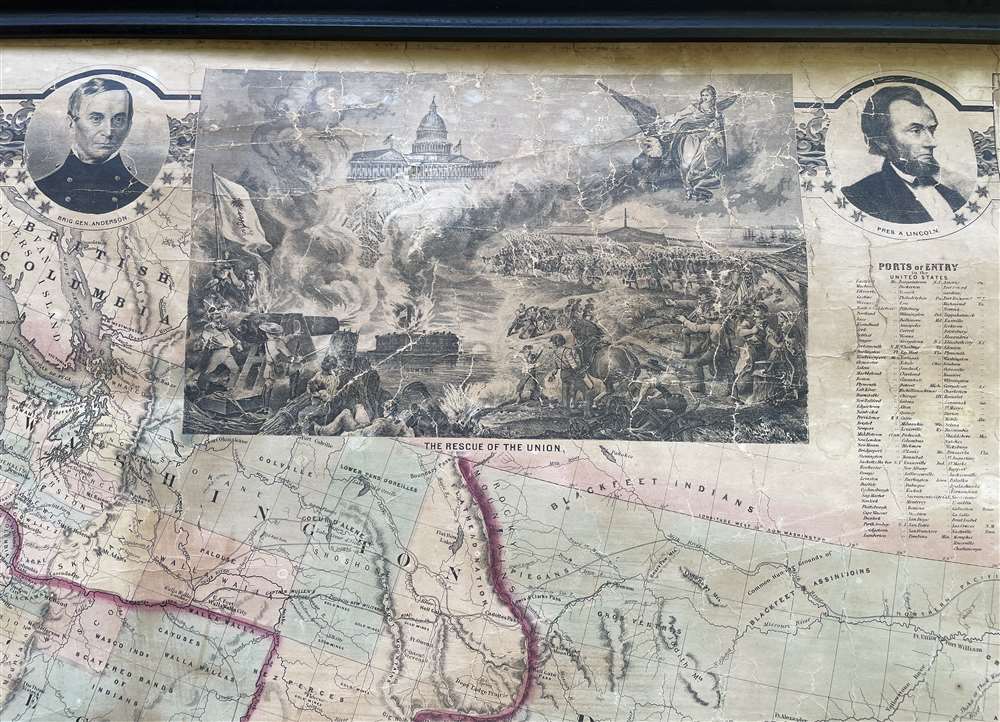 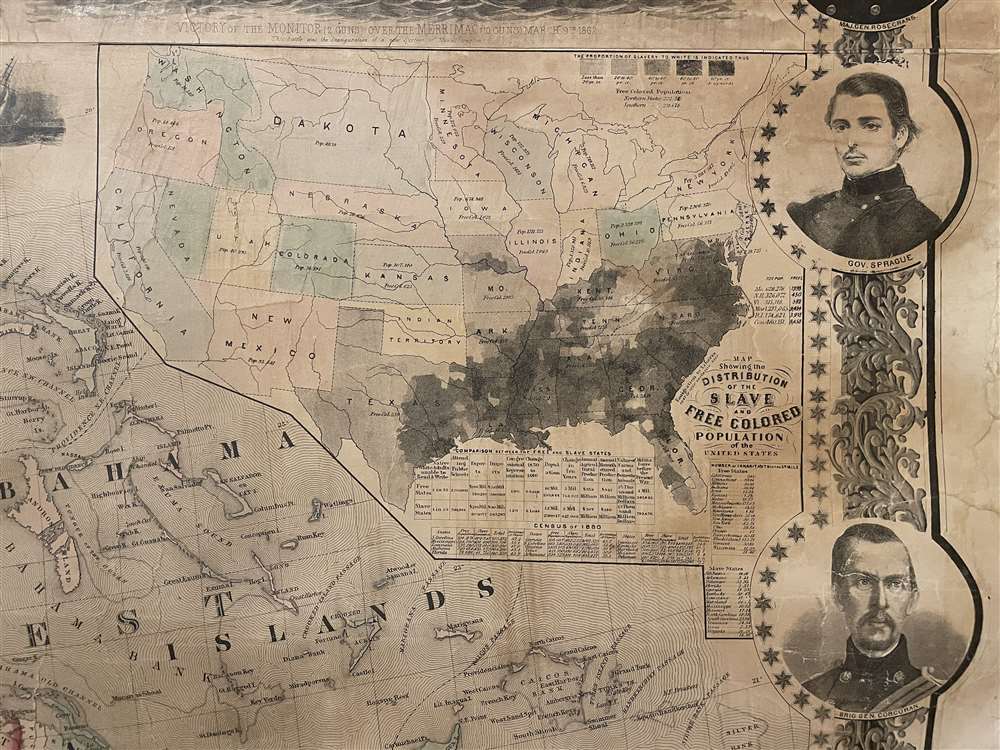 The Civil War - big and bold.

This is a rare 1863 wall map of the United States at the height of the American Civil War (1861 - 1865). The map was issued by John Calvin Smith and Robert Persall Smith during the Civil War to capitalize on general interest in the war among the northern elite. At roughly 70 inches square, this enormous and lavishly produced map covers all of the United States and Mexico. The early state and territory configuration includes the ephemeral Confederate State of Arizona. It is surrounded by images of Union officers and politicians - including Lincoln, Fremont, Wilkes, and Scott. Curiously, these do not include General Grant, as the map's publication in early January of 1863 predates his assumption of overall command on January 29, 1863. The map features multiple vignette scenes including the victory of the Monitor over the Merrimac, the allegorical 'Rescue of the Union', an illustration of 'Camp Life', the Capitol building in Washington, and an overview of the 'Birth of the Union' at Bunker Hill. Of note, the Pacific Telegraph Route is noted running parallel to the Pony Express Route, which is also illustrated.

A Most Interesting Chart

Below the vignette illustrating the Monitor and Merrimac there is an intriguing chart and 'Map Showing the Distribution of the Salve and Free Colored Population of the United States.' Black shading highlighted the presence of slaves - primarily along major river arteries, and along the coast, where cotton production was most prominent. The 'free colored' population of each state is noted, with Mississippi being shockingly low at just 731 free people of color, set against a slave population of nearly 440,000. The statistical table is rather damning to the 'Slave States' which, while strong in exports (cotton), lag severely in every other sector, including education, manufacturing, imports, agriculture, population, and military might - 1 in every 13 people in the slave states were illiterate, as opposed to 1 in 55 in free states.

All of these factors led to the people of the southern New Mexico Territory, or the Arizona Territory, to formally call for secession, and a convention adopted a secession ordinance on March 16, 1861, with a subsequent ordinance ratified on March 28, establishing the provisional territorial government of the Confederate 'Territory of Arizona'. The Confederate Arizona Territory was officially proclaimed on August 1, 1861 following Lieutenant-Colonel J. R. Baylor's victory over Union forces in the First Battle of Mesilla, and the territory was officially recognized by the government of the Confederacy on February 14, 1862. However, by July 1862, Union forces from California, known as the 'California Column' were marching on the territorial capital of Mesilla. Sent to protect California from a possible Confederate incursion, the 'California Column' drove Confederate forces out of the city, allowing them to retreat to Franklin, Texas. The territorial government fled as well and spent the rest of the war in 'exile'. First, they retreated to Franklin, then, after Confederate forces abandoned Franklin and all of West Texas, to San Antonio, where the 'government-in-exile' spent the rest of the war. Confederate units from Arizona would fought throughout the war, and the delegate from Arizona attended both the First and Second Confederate Congresses.

This map was first published in 1862. The copyright is registered to Robert Pearsall Smith, but the map is more prominently attributed to John Calvin Smith. It was engraved by John Atwood. There are two editions, 1862 and 1863, the present example being the 1863 second edition. The primary difference between editions, beyond the date, is the swapping of some of the generals and other political figures around the border to those who distinguished themselves in 1862. All editions are rare. We note examples at the Library of Congress and in a few private collections.

John Calvin Smith (1809 – June 11, 1890) was an American surveyor and geographer active in New York during the middle part of the 19th century. He was a charter member of the American Geographical and Statistical Society (American Geographical Society). He worked with other important New York cartographers including John Disturnell, George Sherman, and Samuel Stiles, with whom he often published under the Stiles, Sherman & Smith imprint. Stiles may have introduced Smith to J. H. Colton, who acquired many of his map plates in 1853. Most of Smith's maps focus on New York counties, but he also issued maps of the United States, Illinois, Texas, and the California gold fields. Despite being an important and prolific cartographer, much of his personal life and history are shrouded in mystery. Learn More...


Robert Pearsall Smith (February 1, 1827 - April 17, 1898) was an American map maker active in Philadelphia from the middle to late 19th century. Smith was born to a Quaker family in Philadelphia, all librarians and publishers. Robert Pearsall originally ran a law bookstore at 19 James Street, Philadelphia. It was not until 1846 that Smith began producing maps in collaboration with this father, John Jay Smith, and brother, Lloyd P. Smith. One year earlier, in 1845, John Jay, then librarian at the Library Company of Philadelphia and Loganian Library, acquired the American rights to the anastatic process of transfer lithography. In February of 1846 he and his two sons founded the Anastatic Office, a printing concern based on the anastatic process located at 317 Market Street, Philadelphia. The Anastatic Office produced numerous copies and reissues of historic documents and maps from the Library Company's collection before being dissolved in 1847. In the same year Robert Pearsall opened a printing establishment under his own name at 144 Chestnut Street. In 1858, he joined forced with the Swiss-American engraver Frederick Bourquin (1808 - 1897) under the imprint 'F. Bourquin and Company' (602 Chestnut Street). Smith retired suddenly and inexplicably from the printing business around 1865. Smith was also deeply religious, a lay leader in the Holiness Movement in the United States and the Higher Life Movement in Great Britain. Smith and his wife, Hannah Tatum Whitall, first crossed the Atlantic to preach in England, Germany and Switzerland in 1873. They returned in 1875, preaching in Brighton, where Smith supposedly had an affair with an American writer. In, 1888, his entire family moved to England. Learn More...

Library of Congress, Civil War Maps (2nd ed.), 32.5.
Looking for a high-resolution scan of this?