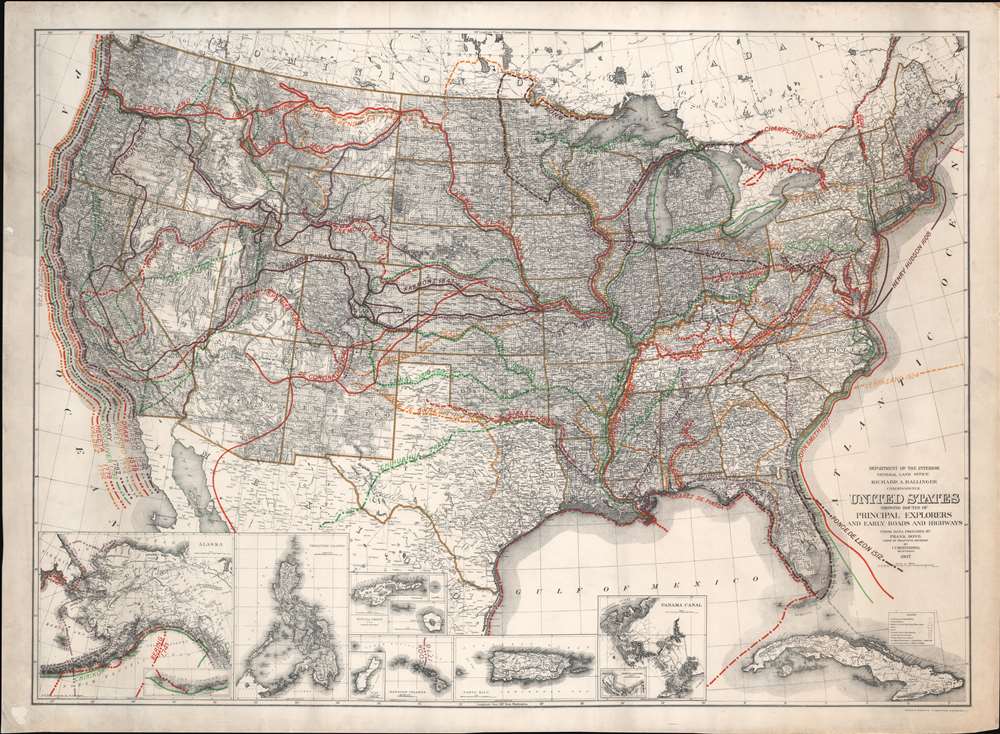 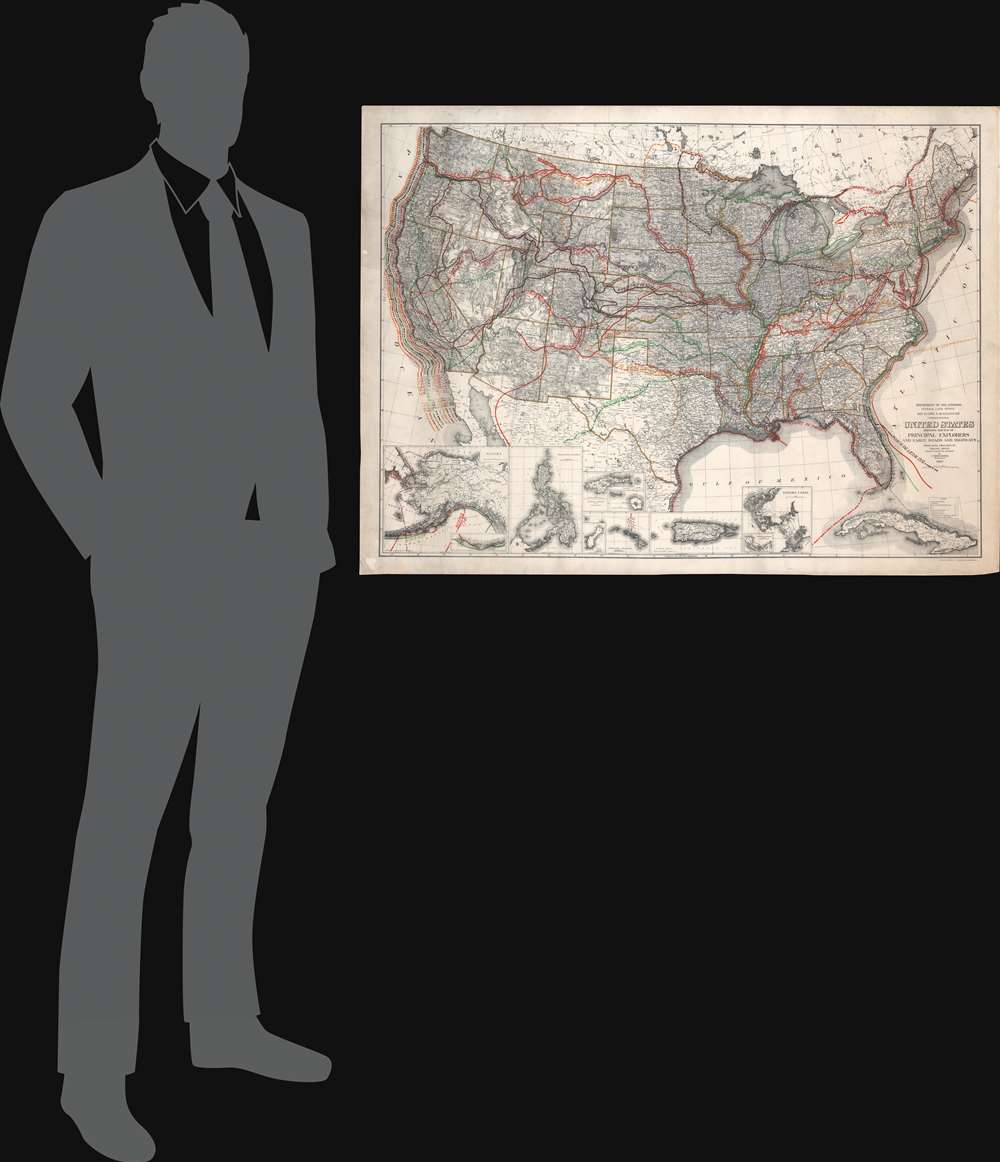 A most fascinating production, this is a fine example of the 1907 first edition of the Berthrong / Bond map of the United States showing exploratory routes and improved roads. The base map is a reduction of the General Land Office map of the United States issued annually from 1899 to illustrate the extending and progress of the Public Surveys. That map has here been overlayed with color-coded routes illustrating the most prominent explorations from the 1500s through the mid-19th century. In addition, it shows important roads then in being built or improved, including the National highway, Braddock Road, the Great Trail. The map was intended to demonstrate the current state of geographical knowledge and underscore the fact that - by 1907, little was left unexplored.

The National Road, begun in 1811 and completed in 1837, was the first major improved highway in the United States. The road has also been referred to as the Cumberland Turnpike, the Cumberland–Brownsville Turnpike (or Road or Pike), the Cumberland Pike, the National Pike, and the National Turnpike. The road, illustrated here by a dotted red line, connected the Ohio and Potomac Rivers and stretched from Cumberland, Maryland to the Illinois - Ohio border. Construction of the road came to an end when federal funding dried up due to the Panic of 1837.

The Braddock Road was opened by the Ohio Company in 1751 and rand from Fort Cumberland, the limit of navigation on the upper Potomac River, to the French military station at Fort Duquesne (Pittsburg) at the forks of the Ohio River. It received its name during the colonial-era French and Indian War (1753 - 1763), when it was improved by British General Edward Braddock. Braddock was accompanied by Virginia Militia Colonel George Washington on the disastrous 1755 Braddock Expedition's assault on French-held Fort Duquesne.

This map was issued in the present first edition by the Department of the Interior General Land Office (GLO) in 1907. The data was compiled by Frank Bond and the map was drafted by Ithamar Parsons Berthrong. The base map was reduced by M. Hendges. It was lithographed in Washington D. C. by Andrew B. Graham. At least three subsequent editions followed, with the last known edition, the fourth, appearing in 1937.


Frank Bond (1856 - 1940) was an American cartographer, draftsman, surveyor, illustrator, and politician. Born in rural Jones County, Iowa, Bond graduated from the University of Iowa. In 1772, he moved to Cheyenne Wyoming, where he worked for the Wyoming Surveyor-General's Office and later the General Land Office as a draftsman. He left this position to edit the Cheyenne Tribute and engage in local politics. Bond was elected as a member of the first Wyoming legislature. In 1900, he moved to Washington, D.C., where he held the positions of Chief of the Drafting Division and Chief Clerk at the General Land Office. While at the Land Office, Bond helped determine the borders of Yosemite National Park . As a skilled mapmaker and illustrator, Bond created numerous maps. He was also an active illustrator, painter and ornithologist, creating and preserving bird refuges throughout the country. He had a twin brother, Fred Bond, was also an important surveyor and draftsman. Learn More...


Andrew B. Graham (1845 - September 9, 1909) was an American lithographer active in Washington, D.C. in late 19th and early 20th century. Graham was born in Washington D.C., the son of a lithographer and engraver. After college, he joined the U.S. Coast Survey, where he was a draftsman until 1889. He retired from the Coast Survey to take over management of his father's lithography firm. The firm, Andrew B. Graham Company, was one of several that thrived on lucrative government publication contracts. Graham died of 'brain fever' in his Washington D. C. residence on September 9 of 1909. Some of his work was republished posthumously until about 1917, and his firm was active until at least the early 1920s. Learn More...