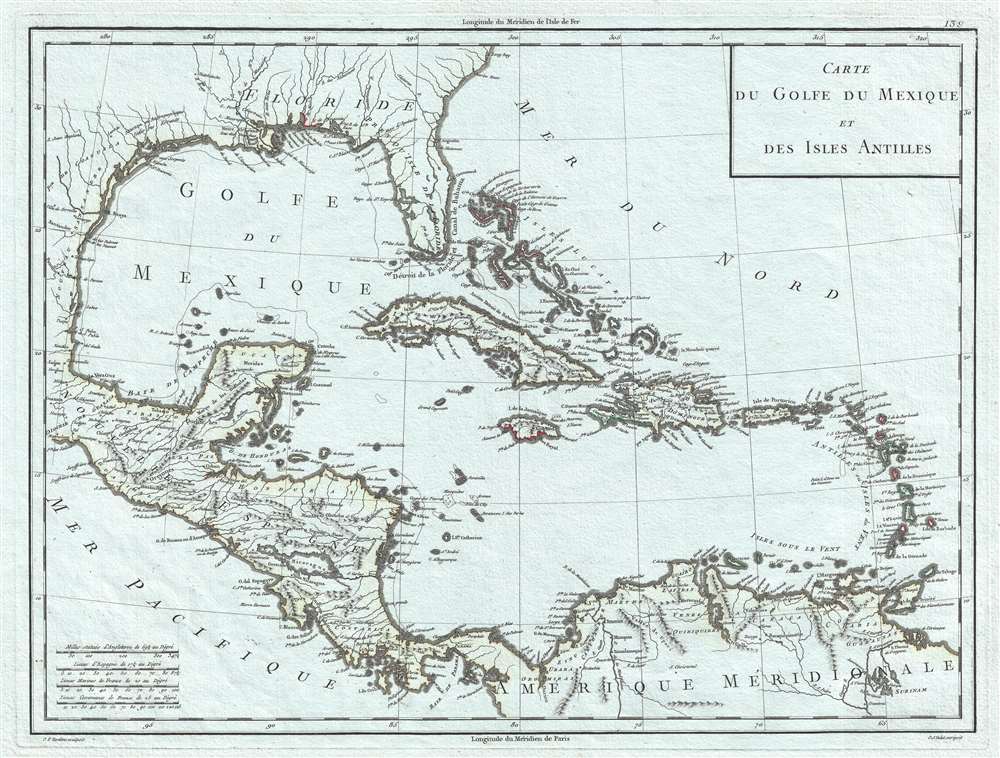 This is a strikingly engraved c. 1795 Edme Mentelle and Pierre-Gilles Chanlaire map of the West Indies that is notably printed on high quality light French Revolution blue handkerchief paper, which briefly appeared during the French Revolution. The map depicts the region from Central America to the Atlantic Ocean and from the Gulf Coast of the United States to northern South America. Beautifully engraved, myriad locations throughout the region are labeled, including islands, archipelagos, and points and capes along the islands' coastlines. New Orleans and St. Augustine are labeled in the southern United States, along with Charleston (Charles Town) and numerous rivers. Regions in New Spain (Nouvelle Espagne) are labeled, as are towns, lakes, and mountains.

The map is printed on fine laid paper with a distinctly blue tint. Blue papers appear in Europe as early as the 15th century, but rose exponentially in popularity in the second half of the 18th century. At the time, papermills collected used rags, which were the broken down into fibers and processed into paper - hence the term 'rag paper'. Blue dies were popular in the European fine-textile industry - particularly among the elite who used blue fabrics for table linens, bed linens, and clothing. Blue dies were less fugitive than other colors, and so were preserved through the papermaking pulpification process. During the French Revolution, the expansive linen closes of the nobility were raided with many of the fine textiles finding their way into papermills. This led to a surplus of blue cloth. Papermakers began experimenting with adding small amounts of blue pulp to stand bleached white pulps, to even out the color and tone - often leading to fine papers with a striking bluish cast - as here. By the end of the 18h century, the fashion for blue paper declined considerably in favor of more traditional white papers. Today maps produced from French Revolution blue paper are highly desirable.

This map was engraved by Pierre Francois Tardieu and P. J. Valet and published by Edme Mentelle and Pierre-Gilles Chanlaire c. 1795.


Pierre-Gilles Chanlaire (June 21, 1758 - March 8, 1817), also known as Pierre Grégoire Chanlaire, was a French geographer who worked for the Bureau of Topography and Land Registry. He married Angélique-Émilie Vermeil on April 26, 1787 with whom he had two children. Learn More...