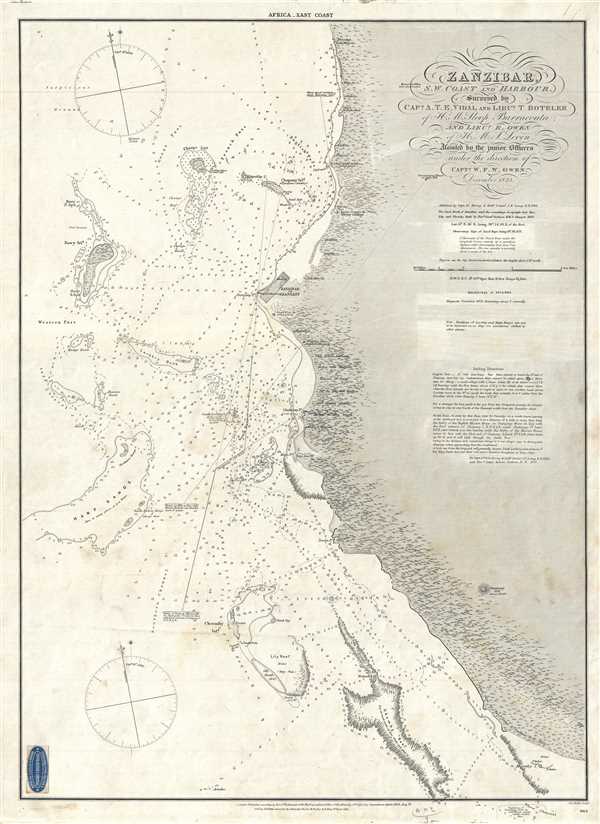 Updated example of a chart from the first survey of the east coast of Africa - depicting Zanzibar at the height of its influence in the slave trade.

This is an 1873 William Fitzwilliam Owen map or chart of the west coast of Zanzibar, Tanzania. The map depicts a portion of the coast of Zanzibar and the Zanzibar Strait including Zanzibar City (Stone Town, Zanzibar or Shangany). The hydrography for this map was produced during Admiral Owen's expedition to map the entire east coast of Africa. Myriad depth soundings populate the Strait, along with newly charted islands, reefs, rocks, and banks. Several landmarks are labeled along the coast of Zanzibar, to aid in navigation. Trees are depicted along the coast, and notations are included to give details to mariners. One section of the map includes a notation which states that the land in that section is between 80 and 100 feet high and slopes steeply down to the beach. Other notations include navigational aids and tips.

The English mission and the minaret in Zanzibar City are labeled. Zanzibar City comprises two main parts, Stone Town and Ng'ambo. Stone Town is the historical core of the city, the former capital of the Zanzibar Sultanate. It was declared a UNESCO World Heritage Site in 2000. Zanzibar was very wealthy and a valuable property under the Sultanate of Oman as it was the main slave market for the Swahili Coast during the 1830s. This was only reinforced after the Sultan moved his capital from Muscat, Oman to Stone Town.

This map was published by the British Admiralty and appears to have been sold by a merchant in Marseille, France, whose advertising pastedown appears in the border.


Vice Admiral Alexander Thomas Emeric Vidal (1792- 5 February 1863) was an officer of the Royal Navy and an accomplished surveyor. Vidal, the youngest of four children, followed his father into the Navy. He began his naval career in December 1803, at the age of 11, as a 1st class volunteer. He served until 1805 when he joined the Royal Naval College at Portsmouth. He was assigned to the HMS Lavinia and spent three years aboard as a midshipman. He received his first commission in 1815 and was appointed to HMS Leven in 1818 as a first lieutenant under William Fitzwilliam Owen. Vidal accompanied Owen on his voyage to Africa to map the eastern coast. Vidal received his first command in May 1823, while one the expedition with Owen, that of HMS Barracuda.

Vidal spent most of his career as a surveyor, who was charged with several tasks, including locating Aitken’s Rock, a rock supposedly in the North Atlantic. There were at least seven different reports of the potential hazard, stating that it was small and protruded only about four feet from the surface of the ocean. In 1830, Vidal was dispatched to find the rock and accurately chart its location. After six weeks of charting supposed locations, Vidal was unable to locate it. However, during the hunt for Aitken’s Rock, Vidal successfully discovered and charted Vidal bank, and the following year was the first to accurately chart and describe Rockall, a nearly 60 foot high islet in the North Atlantic. The United Kingdom claimed the islet in his name in 1955. Learn More...