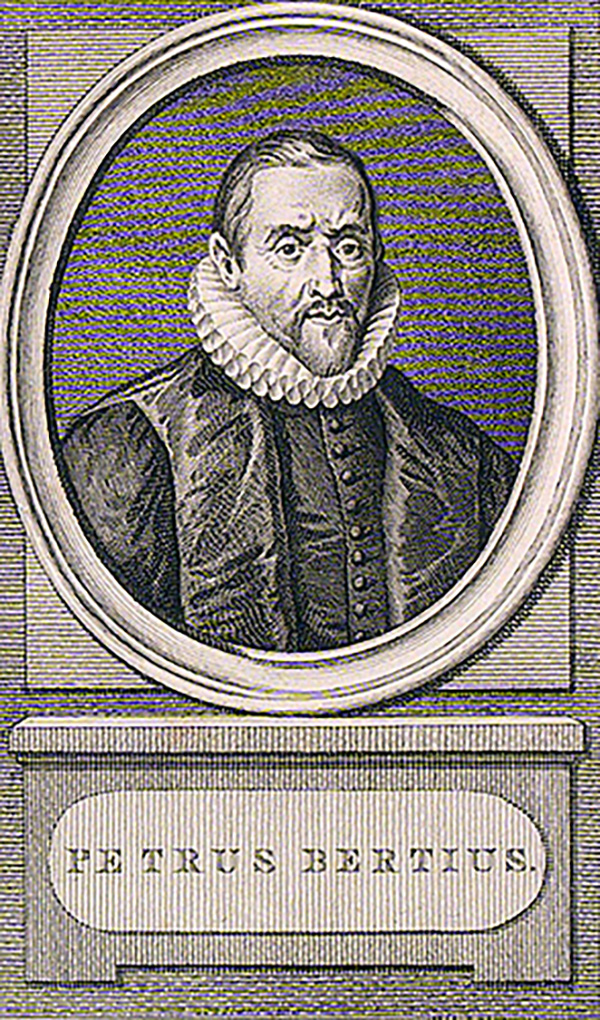 Petrus Bertius (November 14, 1565 – October 12, 1629), also known as Peter Bardt and P. Bertii, was a Flemish theologian, historian, and cartographer. Bertius was born in Beveren (Alveringem), a son of the preacher Pieter Michielszoon Bardt. The Bardt family fled to London at the outbreak of the Dutch War of Independence in 1568, fleeing both religious and political strife. When the political situation in the Netherlands stabilized in 1577, Bertius returned to study at the University of Leiden. He supported himself by tutoring until 1593 when he was appointed subregent of the Leiden Statencollege. This was probably a nepotistic post as, in the same year, he married Maritgen Kuchlinus, the daughter of Johannes Kuchlinus, then regent of the Statencollege. Bertius himself succeeded Johannes, becoming regent in 1606. Through his marriage, Bertius associated with Flemish cartographers Jodocus Hondius and Pieter van den Keere, both of whom were in-laws. Bertius first began publishing cartographic works in 1598 when, working with Barent Langenes, he published a the miniature Latin language atlas Tabulae contractae. In 1618, publishing with his brother-in-law Jodocus Hondius, he issued the atlas Theatrum Geographiae Veteris, which impressed Louis XIII of France sufficiently that he relocated to Paris to take position as court cosmographer to the King. Two years later he converted to Catholicism and took a position teaching rhetoric at the Collège de Boncourt, in Paris. In 1622, Louix XIII granted him a chart in mathematical sciences at the royal college and the honorarium of royal historian. Bertius remained in Paris until his death in 1629.