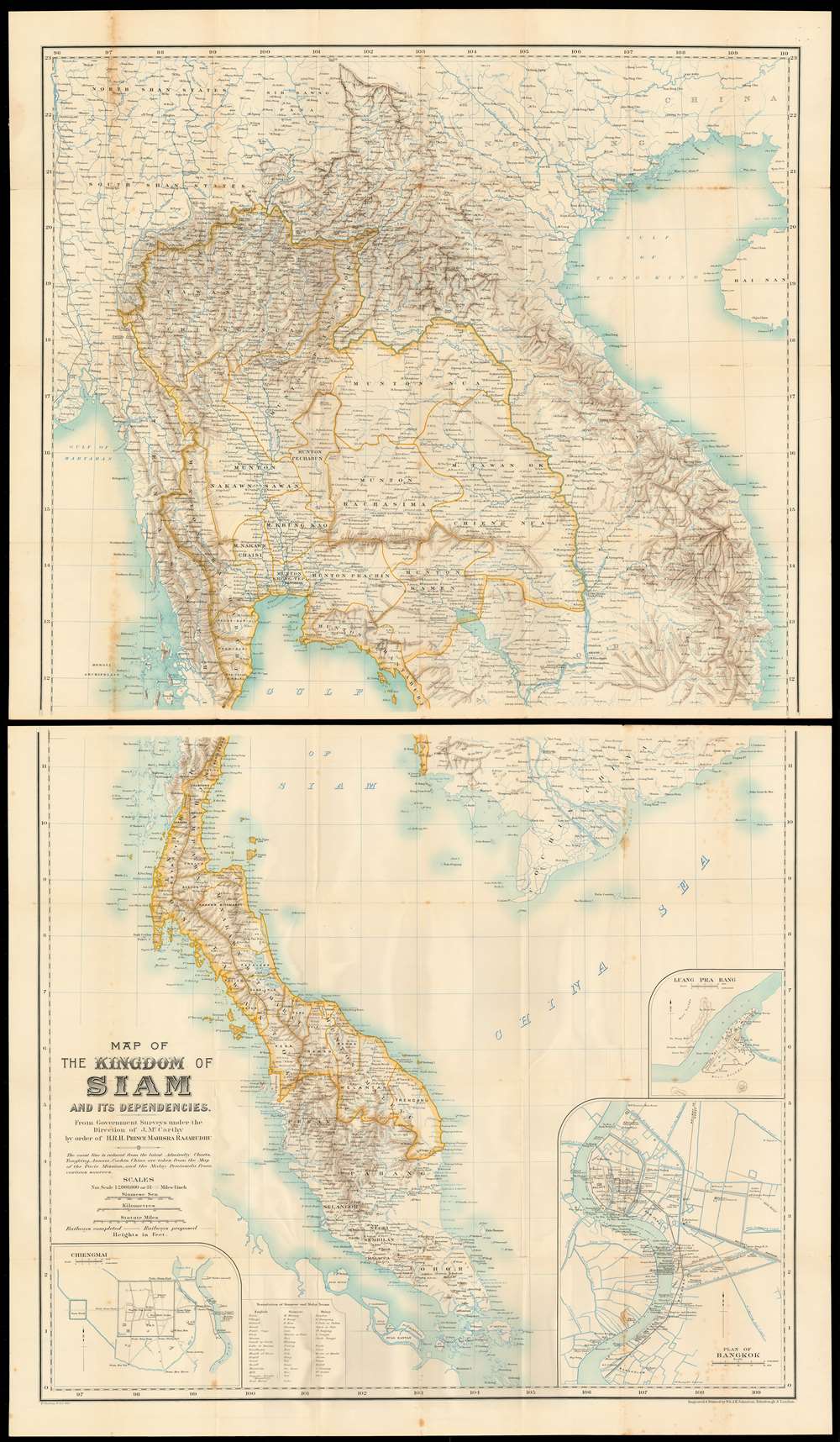 By far the best map of Siam available to the public at the turn of the century' -H. Meinheit

This is James Fitzroy McCarthy’s 1900 Map of Thailand / Siam and the surrounding countries: it is the first complete, scientific map to present this region, produced at a time when French diplomat, explorer and surveyor August Pavie was surveying the same region. The two-sheet map shows all of Siam, eastern Burma, Laos, Cochinchina and the Malay Peninsula. There are inset plans of Bangkok, Chiang Mai, and Luang Prabang on the lower sheet.

McCarthy and the Surveying of Siam

McCarthy had been attached to the Survey of India in the 1870s, in the Eastern Frontier Series. When that monumental survey finished its progression through British Burma, an arrangement with King Chulalongkorn of Siam was made to extend the survey through his domains. McCarthy was placed in charge of the undertaking, and by 1885 would be made superintendent of the newly-formed Siam’s Royal Survey Department.

He began by surveying from Burma to Bangkok, then triangulating the northern part of the Gulf of Siam, its rivers and canals. Once established, he produced surveys in conjunction with Siamese telegraphic expeditions; the King and the Prince of Siam - both reformers and proponents of modernization - encouraged McCarthy to persevere in his survey work in spite of frequent local opposition. His work was promptly pressed into diplomatic service, influencing boundary disputes between Britain and Siam in the Malay Peninsula. McCarthy was directly tasked by the King to conduct surveys along the West Bank of the Mekong River in order to control Chinese Haw bandits, and to reinforce Siamese territorial claims against the French in Vietnam. McCarthy began his surveys of Lao in 1884, during which he first encountered reports of French explorers and missionaries in Muang Ngan. This stage of the survey led to the fixing of the position of Dien Bien Phu (Mường Thanh, M. Teng on the map) which marked the edge of Siam’s Territorial claims in the vicinity of Lao and northern Vietnam.

The Contest with France

1886 saw the naming of Auguste Pavie as vice consul for France in Luang Prabang; during his tenure he oversaw an explosive mapping of the surrounding region which would result in French control over Laos - in direct conflict with McCarthy's enterprise, even as he and the Siamese mapped the Black River valley with an eye towards entrenching Siamese claims. Pavie was able to map the region more swiftly, taking advantage of McCarthy's falling ill in 1887; by 1888, the French had installed troops in the area, preventing the Siamese survey from continuing and cementing French control over northern Vietnam and Laos.

McCarthy's first map, also entitled 'Map of the kingdom of Siam and its dependencies,' was at a lower resolution (1 : 3000000) and printed to a single sheet. Intended to accompany McCarthy's 1887 presentation to the Royal Geographic Society, it encapsulated the survey work done by him and by the Siamese. Full of detail and fixed to latitude and longitude, it superseded all maps of the region produced previously. It was lacking in new detail for southern Laos and the northern Mekong, but it provided both French and Siamese boundary lines for their mutual frontier and provided the basis for strategic planning in the coming years.

McCarthy undertook a series of railway surveys in Siam, and participated in efforts to survey first the border between Siam and Burma, and then to survey the northern extents of Siam bordering the Shans. These surveys resulted in the linkage of continuous triangulations between the regions surveyed by the Indian Survey and the Siamese Survey - extending from Pahom Pok in Burma all the way to Luang Prabang (the triangulation charts themselves are to be found in the text accompanying the map.) As the survey approached the upper Mekong, McCarthy's team again encountered Pavie's surveyors at Chiang Hung in the Sipsong Panna region - both parties disappointed to find themselves surveying ground covered by the other. McCarthy's survey of along the Vietnamese border was abruptly curtailed by August Pavie's gunboat diplomacy: in 1893, France laid claim to all territory east of the Mekong, and Siam ceding a 25-mile demilitarized zone on the western shore of the river, fixing the border.

The present map, produced to accompany McCarthy's Surveying and Exploring in Siam, incorporates significant new information not present on the 1888 map. It is produced at a finer scale (1 : 2000000) than the earlier map, with sharper detail. The interior shows regional border divisions consistent with Siamese administrative reforms; Siam's new railways (both completed and prospective) are shown as well. The country's external borders reflect the loss of Siamese territory following the 1893 treaties with France. Beyond those borders, McCarthy's new map incorporates significant amounts of detail derived from the opposition's best maps, derived from the 1893 and 1895 Pavie Missions. On its publication, the map earned McCarthy the Royal Geographic Society's 'Patron's Medal' in 1900. The president of the society hailing this map as 'the first scientific map of Siam.'

The map was engraved by W. and A. K. Johnston for inclusion in McCarthy’s 1900 book, Surveying and exploring in Siam. OCLC shows perhaps a dozen examples of the map, although it is occasionally miscatalogued as the earlier map. The book is well represented in institutional collections, but we only see one example having been on the market - and none since 1999. The map is scarce on the market and does not appear in catalogue or auction records.

James Fitzroy McCarthy (1853 - September 23, 1919) was an Irish surveyor and cartographer who was instrumental in the setting of Thailand’s borders in the late 19th century. By 1873 he was a member of the Survey of India, and his duties with the survey led him through Burma to Siam, where he would undertake what would prove to be his most enduring work. He produced the first scientific maps of Siam, which became the documents of reference during that period’s colonial conflict between the British and French over Southeast Asia. In 1885 he became the first Director-General of Siam’s Royal Survey Department, later the Royal Thai Survey Department, which was established in 1885. Learn More...


Auguste Jean-Marie Pavie (May 31, 1847 - June 7 1925) was a French civil Servan, explorer and diplomat active in Southeast Asia. As resident minister in Bankok, he was instrumental in French successes of 'gunboat diplomacy' in the Franco-Siamese war, which established French authority in the Mekong river valley and resulted in the French Protectorate over Laos. (He would become Minister of the colony , and eventually the first Governor-General of Laos.) Over the course of the 1880s and 1890s, Pavie undertook four survey missions embracing over 250,000 square miles in the highlands North and East of the Mekong, traveling on foot, by elephant and by raft with a team of as many as 40 assistants. The four Missions covered 1) Cambodia and Southern Siam; 2) Northeastern Laos and the exploration of the Black river as far as Hanoi; 3) the Mekong river from Saigon to Luang Prabang; and 4),from 1894 to 1895, the Laotian borderings with China and Burma. In addition to his governmental and cartographic work, Pavie was active in the 1889 establishment of and institution for the education of future colonial administrators, the École coloniale Learn More...


Henry Sharbau, (fl. 1870-1906) was a lithographer active in London and Edinburgh. While nothing is known of his early training, it is likely that his early years were spent with the navy: his earliest known works of the 1870s were on charts produced by the Hydrographic Department. The 1880s saw the beginning of a long association with the Royal Geographic Society, and then with the mapmaking firm of W. and A.K. Johnston. Over a hundred works appear in OCLC with Sharbau’s imprint. Interestingly, the British Naval Lists reveal a Frederic Henry Sharbau (1867-1963!!!) working as a cartographer and draughtsman starting about 1907 and lasting into the 20s. Perhaps this Methuselah is a son? Learn More...