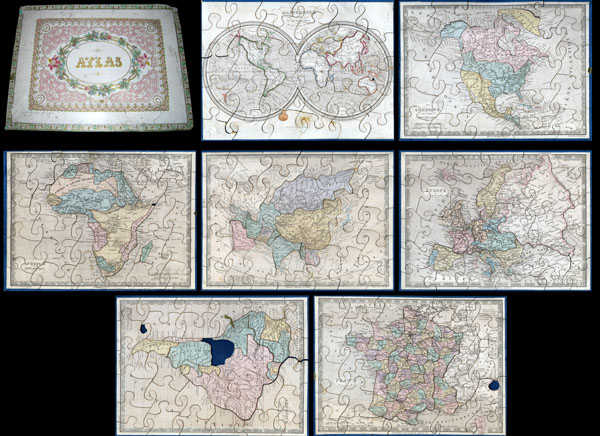 A very attractive an unusual c. 1850 jigsaw puzzle atlas published by Auguste Logerot. Consists a custom box of seven interesting jigsaw puzzle maps: the World, North America, South America, Europe, Asia, Africa and France. Each map is mounted on a board and dissected as a jigsaw puzzle. States and regions are individually dissected along their boundaries while oceans are dissected into more traditional jigsaw puzzle patterns. Individually the maps are based upon Dyonnet's engravings for A. R. Fremin's geography.

The North American map is probably the most interesting showing Mexico's claims to much of what is today the American Southwest, including the modern day states of California, Arizona, New Mexico, Nevada, Colorado and Utah. Texas is colored as part of the United States but looking closely one can see that it is clearly drawn as a separate independent nation. Also shows the U.S. claims to British Columbia, to the latitude of 54°40,' prior to the Oregon Treat.

The Africa map exhibits the somewhat limited knowledge of Africa's interior in the early 19th century. Coastal areas are well mapped by the interior is somewhat vague. Various tribes are noted but none of the Rift Valley lakes appear. Missing a small piece on the Horn.

The map of France is divided according to departments. Missing small chunk in the lower right quadrant.

South America map is missing the Bolivia piece and a small chunk in the lower left quadrant.

Puzzle maps like this were first made in London by John Spilsbury in the 1760s. The style passed to the continent and became a popular educational tool in France and Germany in the early to mid 19th century. While rare and often in poor condition, these curious maps and atlases are among the most amusing and whimsical geographic themed educational devices to appear in the 19th century.

Rumsey 4782.001 (Similar Example).
Looking for a high-resolution scan of this?