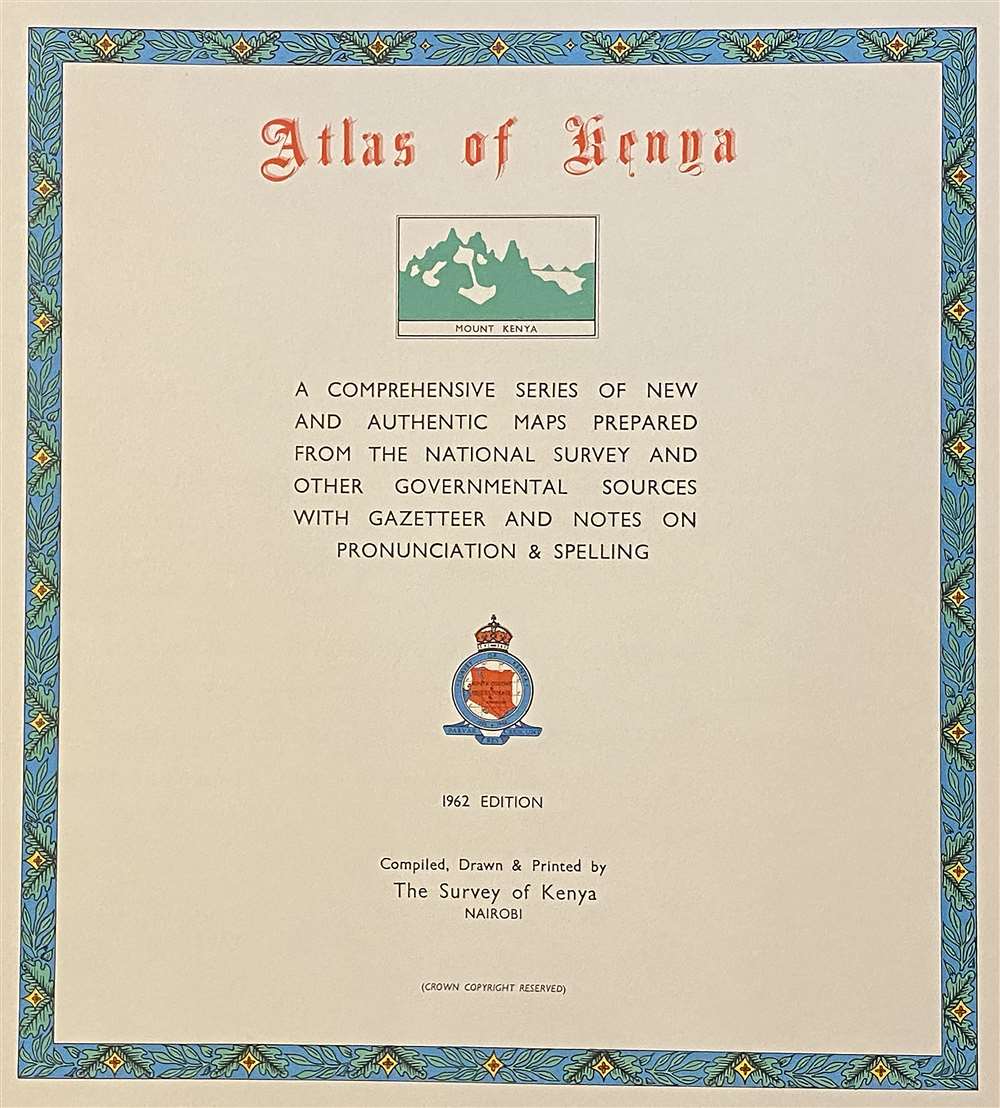 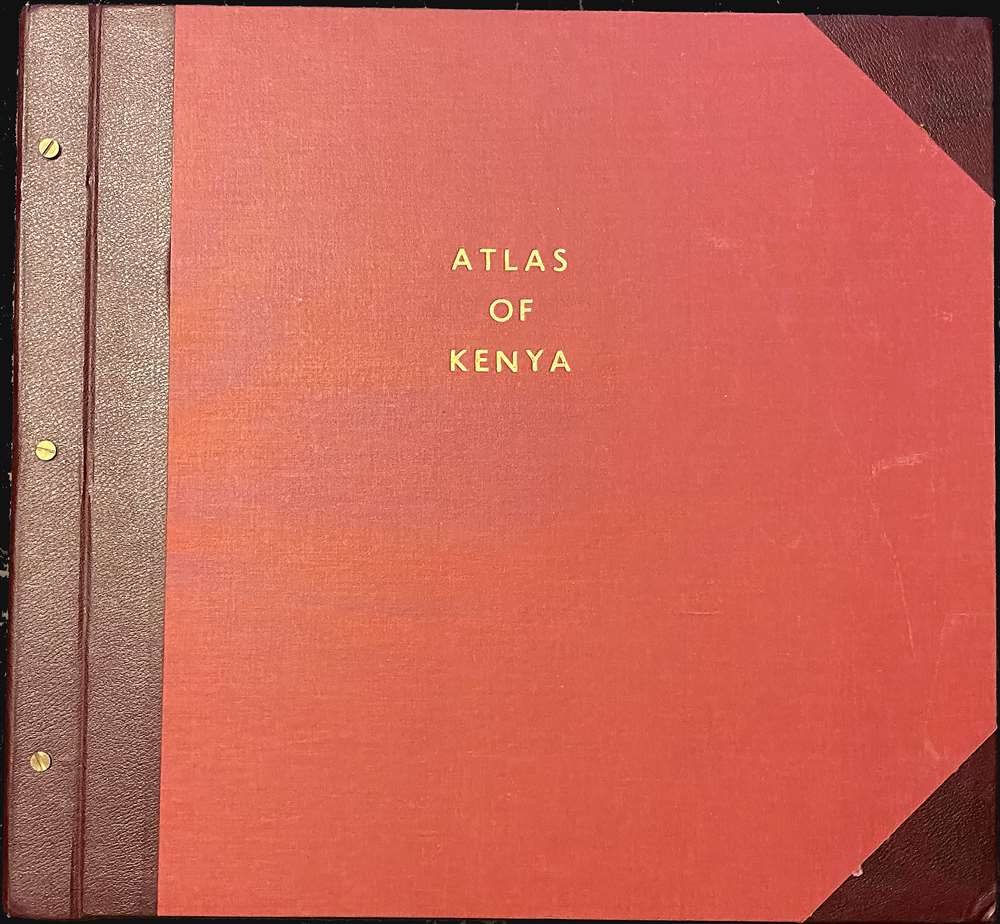 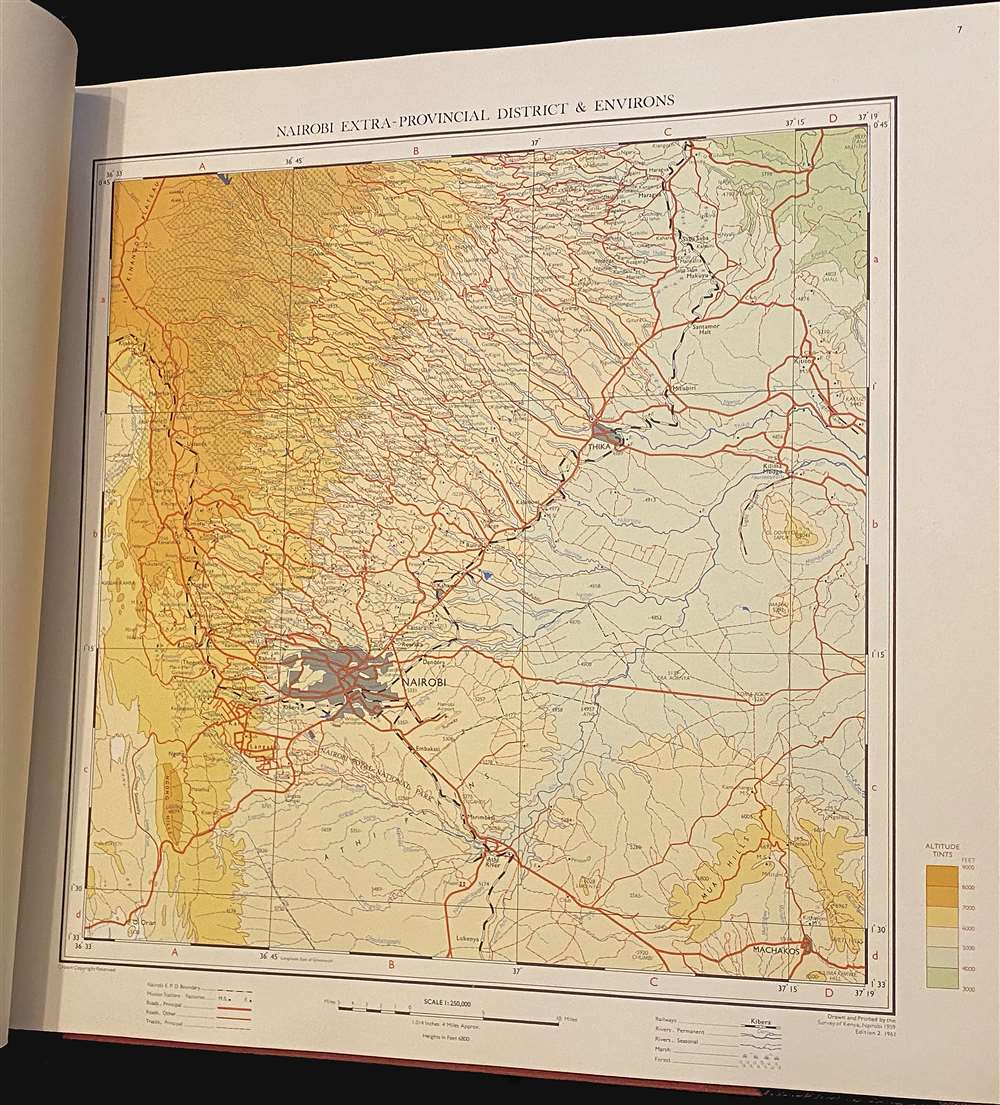 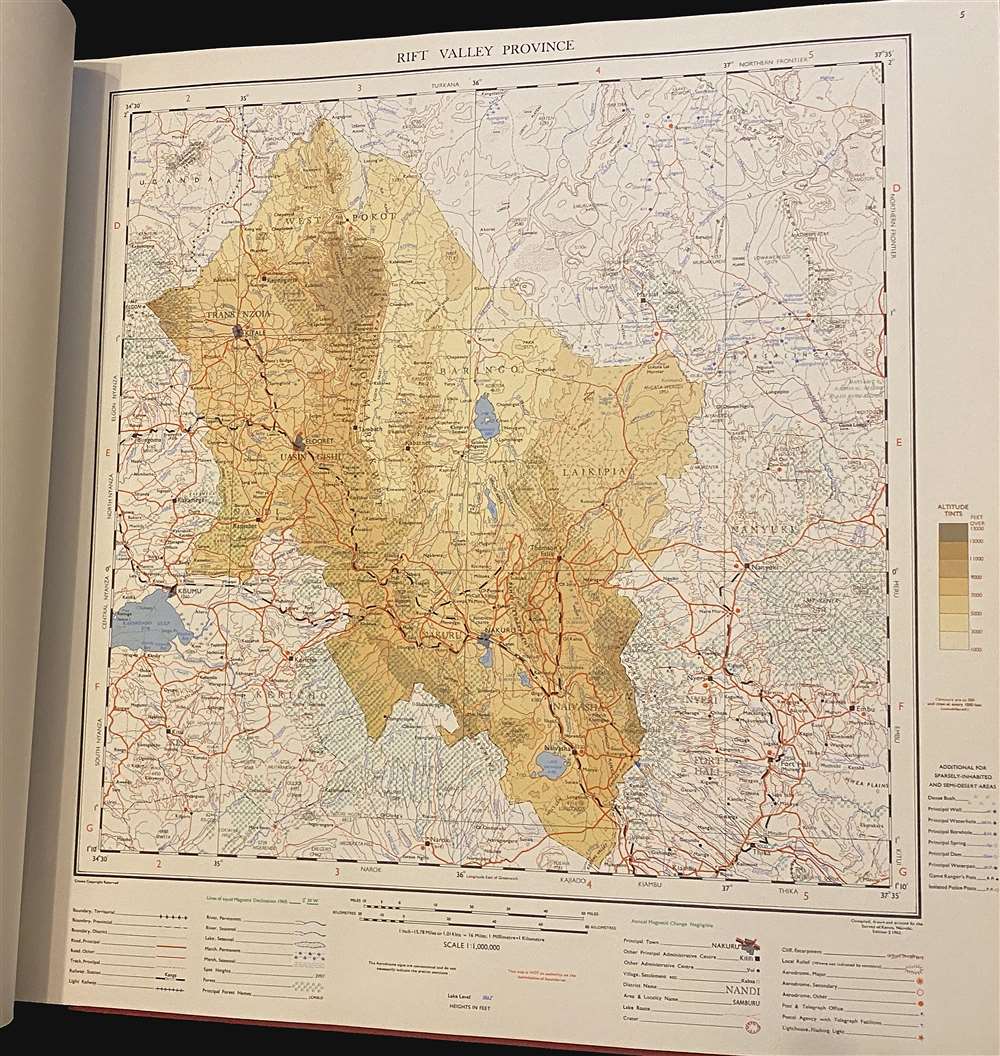 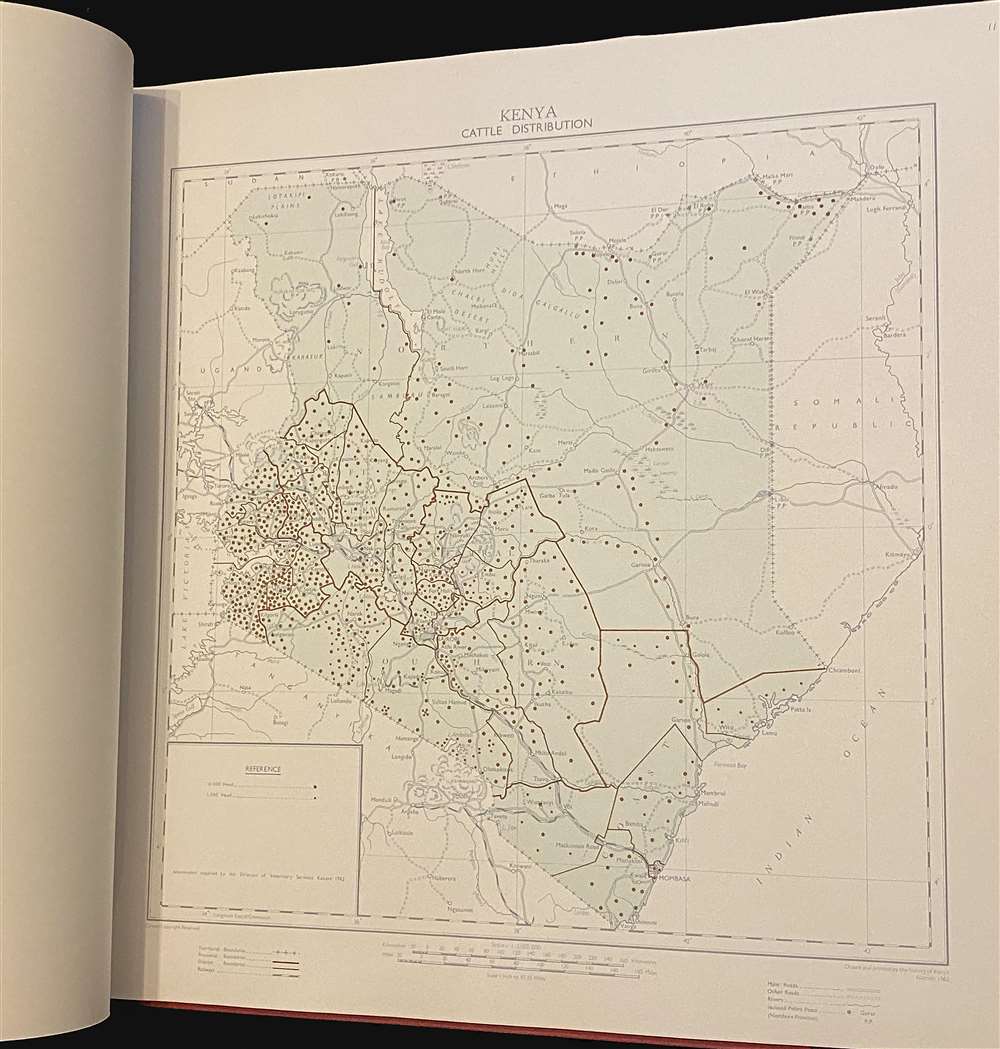 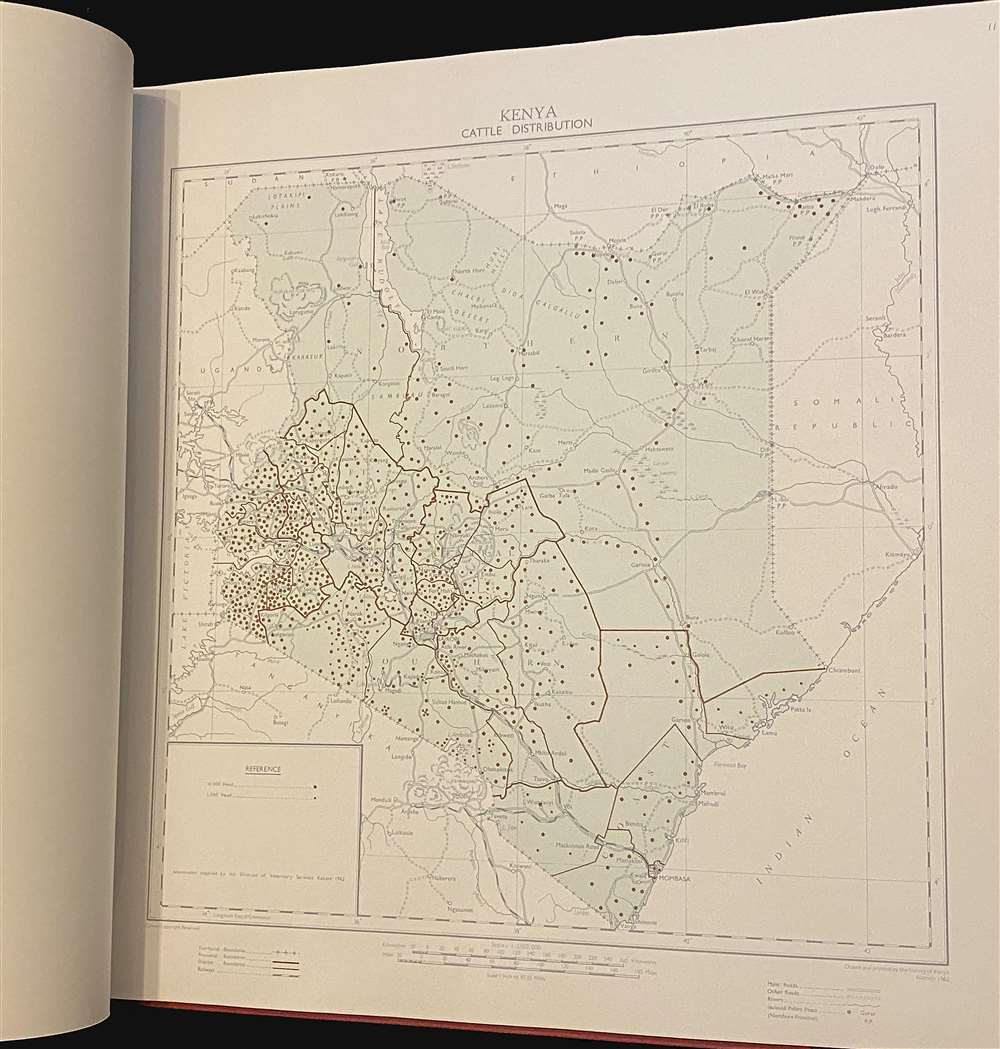 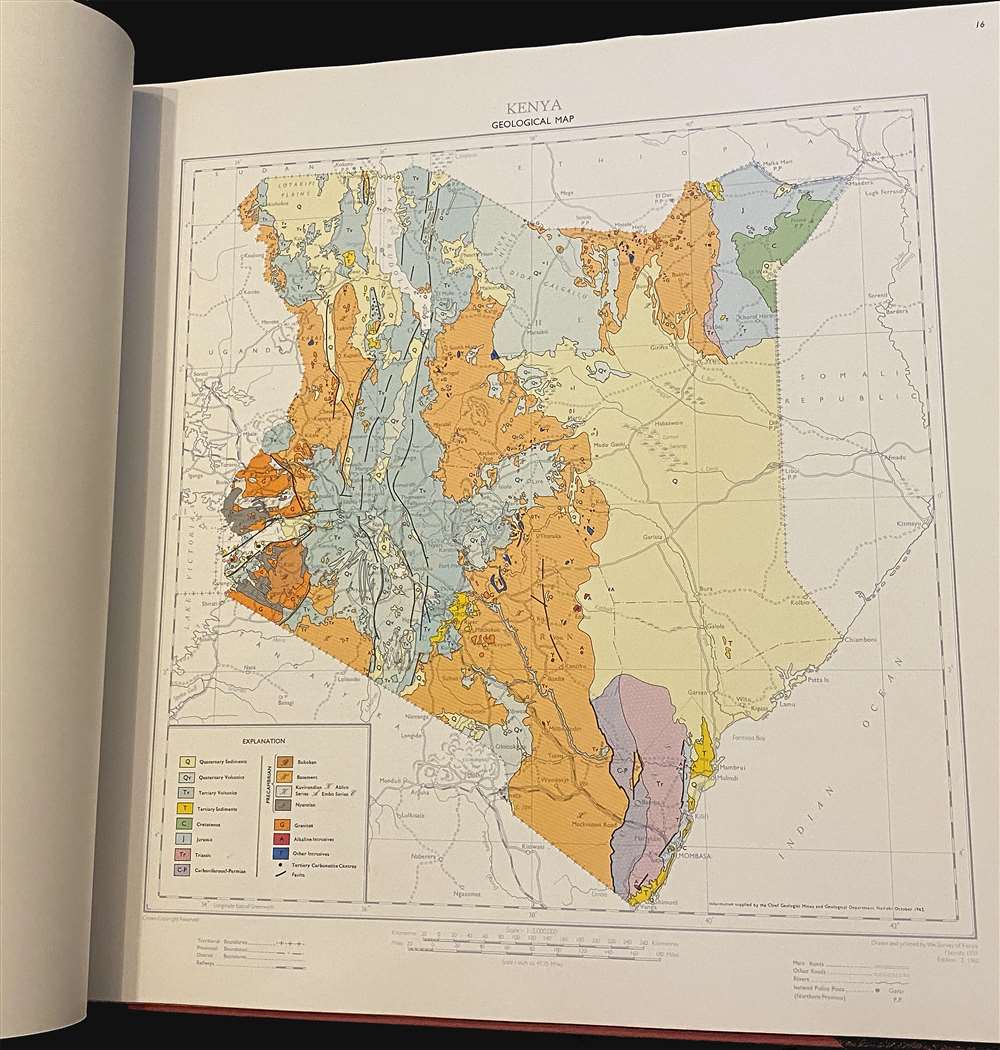 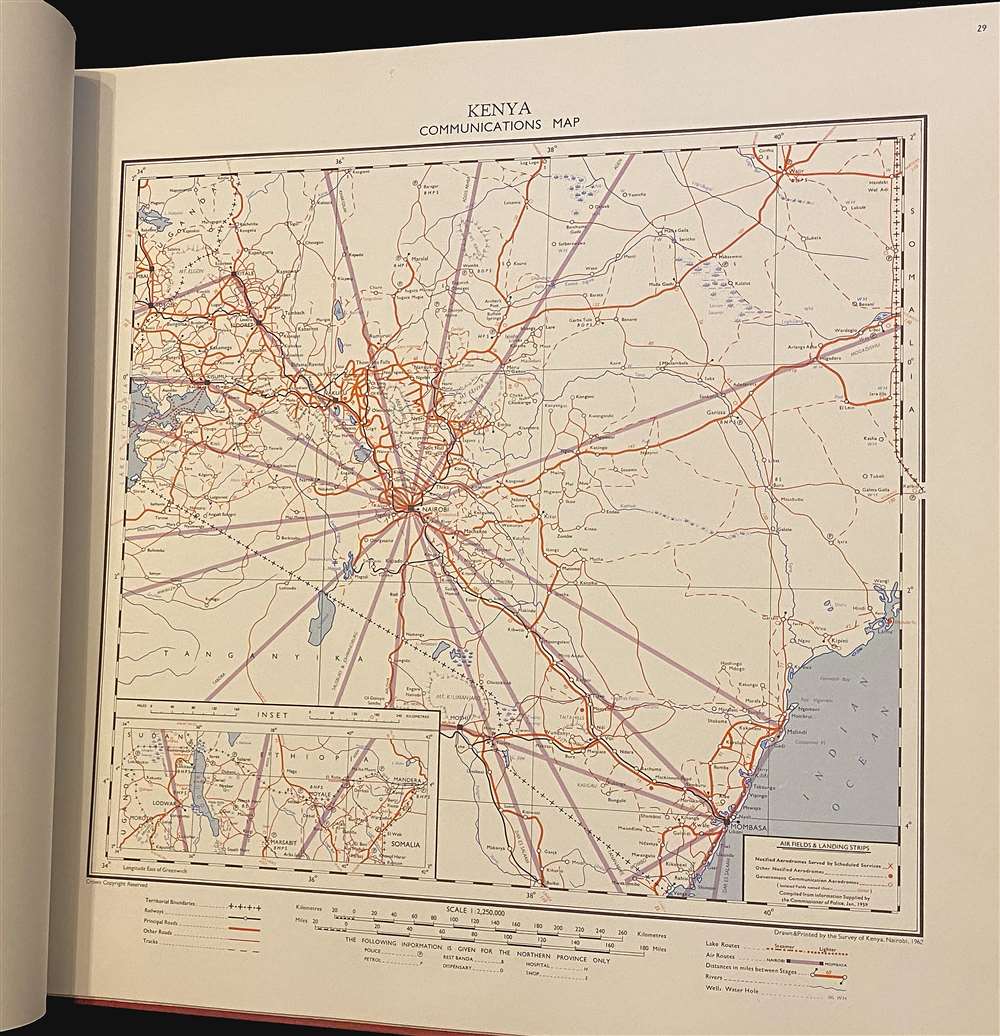 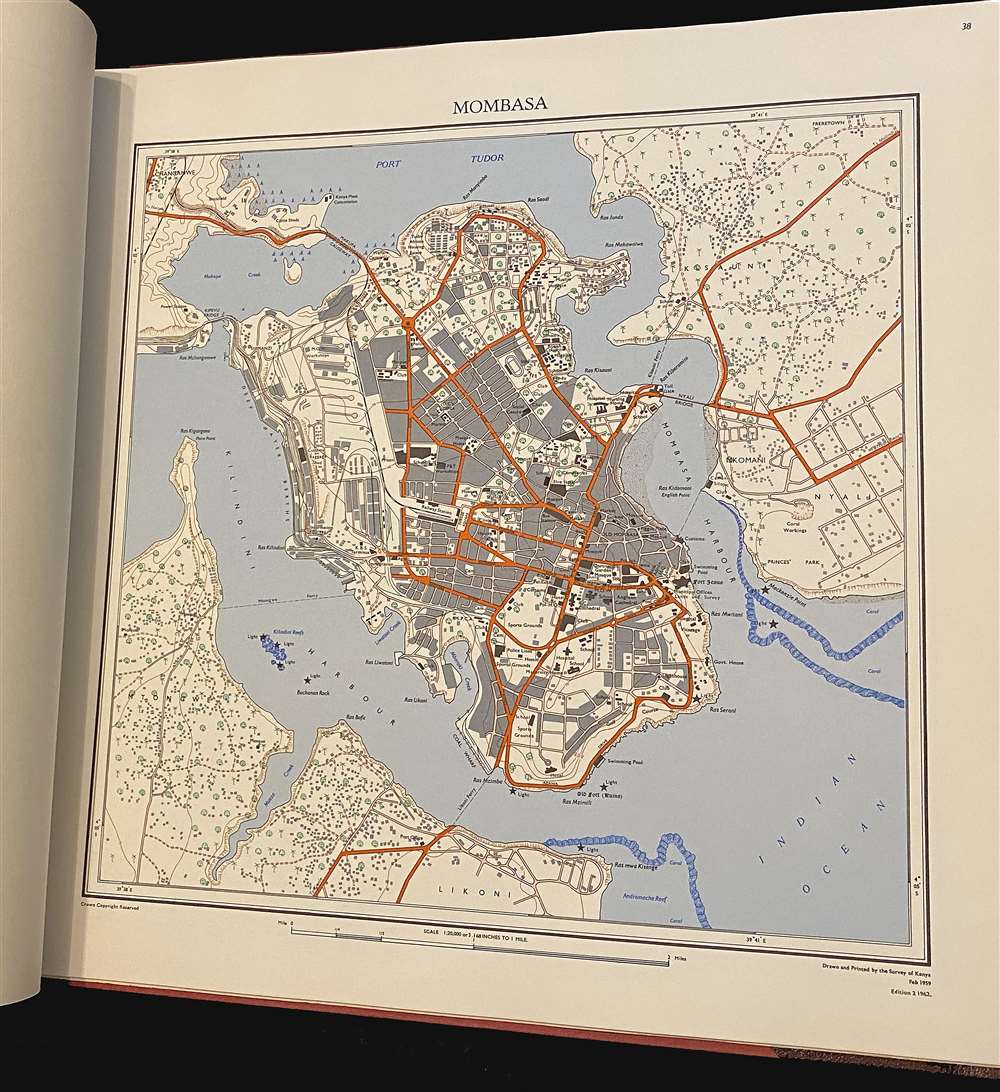 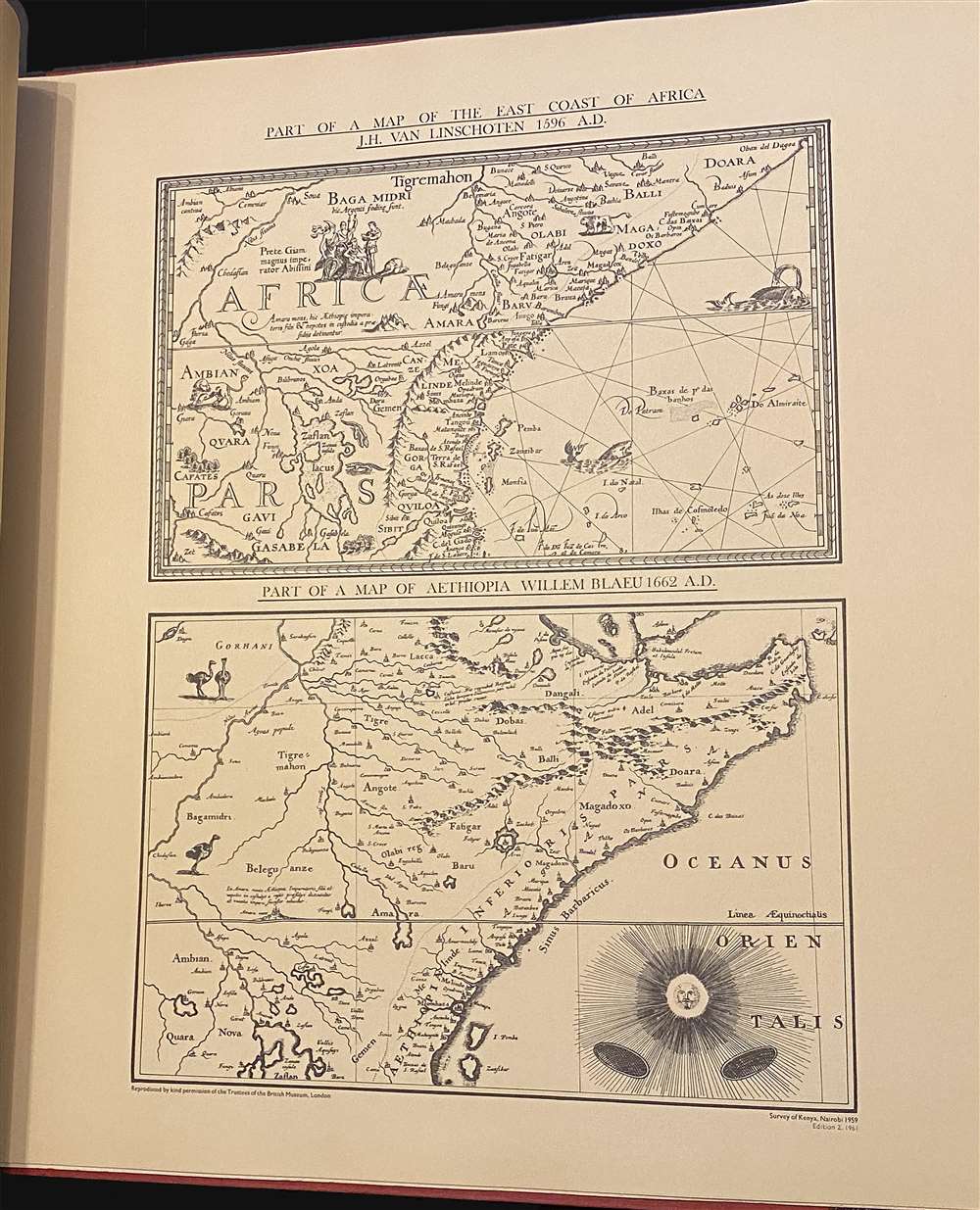 This is a 1962 atlas of Kenya, produced by the Survey of Kenya a year before the end of the British Protectorate. Though very much the result of a massive group effort (as with most modern cartography) it was produced under the guidance of Douglas Ernest Warren, one of the most effective and influential post-war surveyors working as Britain's colonies in Africa gained independence.

The atlas contains forty seven leaves of maps, all printed in color. The maps of the full country - physical, cultural and statistical - are at the scale of 1 : 3,000,000 (unless otherwise noted.) A continental map places Kenya in relation to the rest of Africa; general maps of the country highlight regional boundaries, administrative regions, and physical characteristics. Six regional maps at the scale of 1 : 1,000,000 show Kenya's provinces in astonishing, richly-layered detail. Further national maps focus on specific areas of Kenya's economy and unique challenges. Cattle distribution, drainage, geological features, soil characteristics, vegetation, agriculture, and game and forest reserves all receive dedicated maps. Elaborate charts illustrate Kenya's rainfall and climate by seasons, and maps showing the prevalence of malaria, Tsetse flies, and cattle ticks reveal some of Kenya's challenges as an agricultural nation. Specific maps focus on Kenya's tribal and ethnographic divisions, and population density. Dedicated maps focus on police, communications, postal, educational and hospital resources. There are full sheet city plans of Nairobi and Mombasa; there are two sheets containing nine plans each of smaller townships.

At the end of the atlas are reproductions of maps reaching back to the 16th century and familiar to the dedicated collector: Gastaldi, Linschoten, Blaeu, and Purdy all make appearances.

The first edition of the Atlas of Kenya was completed in 1959; a further edition was produced with the same title in 1962, with some updates and two new leaves of maps. A much-expanded third edition was printed in 1970 as the National Atlas of Kenya. All three editions are well represented in institutional collections.

Douglas Ernest Warren (June 8, 1918 - September 22, 1993) was a British surveyor and civil servant. The son of an Army officer, he received a grammar school education and went on to get a First in Mathematics just as the Second World War broke out. Commissioned as a Lieutenant in the Royal Corps of Signals, he was posted with the Malaya Command, which was disbanded when it surrendered with all other commonwealth forces in the Battle of Singapore. Warren was made a prisoner of war by the Japanese, and records put him in a Thailand POW camp in November of 1944. But he survived the ordeal: he returned to England and married. The first of two daughters would be born in the Spring of 1947. His ability with mathematics led him to become a surveyor with the Colonial Service, first in Tanganyika 1946-55. He was made Superintendent of Surveys in 1955, then moving to Kenya to become the last British Director of the Kenya Survey Department, a position he retained until after Kenya's independence in 1965. Afterwards, he would join the Foreign and Commonwealth office, eventually becoming Director of Overseas Surveys. He would be appointed CMG for his service in 1973. He remained a Director and Survey Adviser for the Foreign Office until 1980. During his long career he was instrumental in mapping Britain's remaining colonies just as they gained their independence. Under his guidance the Directorate of Overseas Surveys mapped nearly 3 million square miles of 80 developing countries, in Africa, the Caribbean and the Far East. Throughout his career he was noted for pushing to employ more modern methods in the Diretorate's surveys, employing aerial photography, photogrammetric machines, and other up-to-date techniques, including the use of Doppler and satellite imagery. Against his strenuous efforts, the DOS would eventually be broken up by the government in the early Eighties, to be absorbed by the Ordnance Survey. He retired in 1980. Learn More...