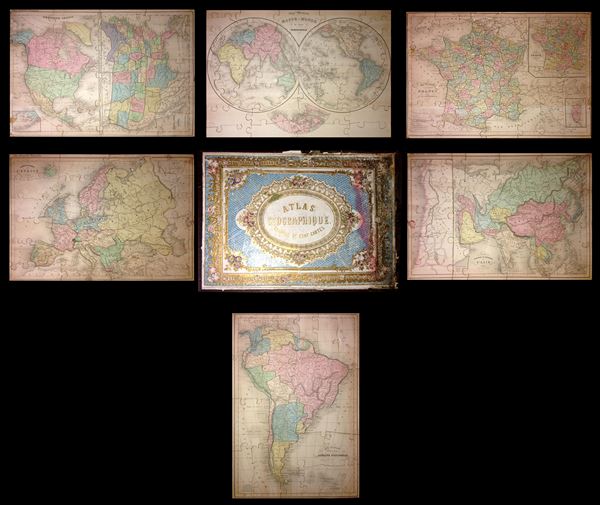 A large and early puzzle atlas.

This is a very attractive and rare c. 1860 jigsaw puzzle atlas published by Alexandre Delamarche. It consists of a custom box containing six jigsaw puzzle maps: South America, France, Europe, Asia, the World in hemispheres, and North America with the United States. This is the largest puzzle map we have seen, being nearly 50% larger than most other examples in this style. Each map is mounted on a board and dissected as a jigsaw puzzle. Countries and regions are individually dissected along their boundaries, while oceans are dissected into more traditional jigsaw puzzle patterns. This map is particularly difficult to date. We have dated it based upon the political configuration of the United States, particularly the large and ephemeral Nebraska Territory. However, it is not uncommon for European cartographers to reuse out of date maps well after the fact - particularly for educational publications like this. It is most likely missing one map that would have focused on Polynesia.

The world map is beautifully drawn on hemispherical projection. Antarctica is only tenuously denoted, reflecting the primitive state of exploration in the region. The long sought Northwest Sea Passage from the Atlantic to Pacific, proposed by many early navigators is also depicted as an inset below the two hemispheres.

The France map covers the Kingdom showing its various departments. An inset map featuring France divided according to provinces is also included in the top right quadrant. Another inset in the bottom right quadrant details the island of Corsica. The French Department system was established on March 4th, 1790 by the National Constituent Assembly to replace the provinces with what the Assembly deemed a more rational structure. Many of the departments that were created in 1790 remain the administrative districts to this day. Nonetheless, the province system was so engrained that most cartographers felt obliged to include both maps of France in their atlases, one showing the current department system, and another defining the defunct provinces.

The map of Asia covers from the Arabian Peninsula and Turkey eastward as far as Kamchatka. An inset map along the left margin details Israel or the Holy Land, covering from Gaza north to the Gulf of Iskenderun (Gulf of Alexandretta). The sea between Japan and Korea, whose name, either the 'Sea of Korea' or the 'Sea of Japan,' currently a matter of historical and political dispute between the two countries, is here identified in favor of Japan (Mer Du Japon). The Great Wall is also identified.

The political map of Europe covers the continent in its entirety, including Iceland. It depicts the Austrian Empire at its height, the many states of the German Confederacy.

The map of South America covers the entire continent from Panama to Cape Horn and includes the Falkland and South Georgia island groups. Depicts the continent in impressive detail – especially regarding the Amazon interior, which at the time was largely unknown. Bolivia is shown with an outlet to the Pacific and Patagonia is separate from the Argentine Republic and Chile.

Generally very good condition. Wear and damage to box, especially at edges. Maps are in very good condition and generally complete. Minor damage to a couple of pieces in the North America and United States map and some spotting on the Europe map. See photos.
Looking for a high-resolution scan of this?