1793 Manuscript Pocket Atlas of the World 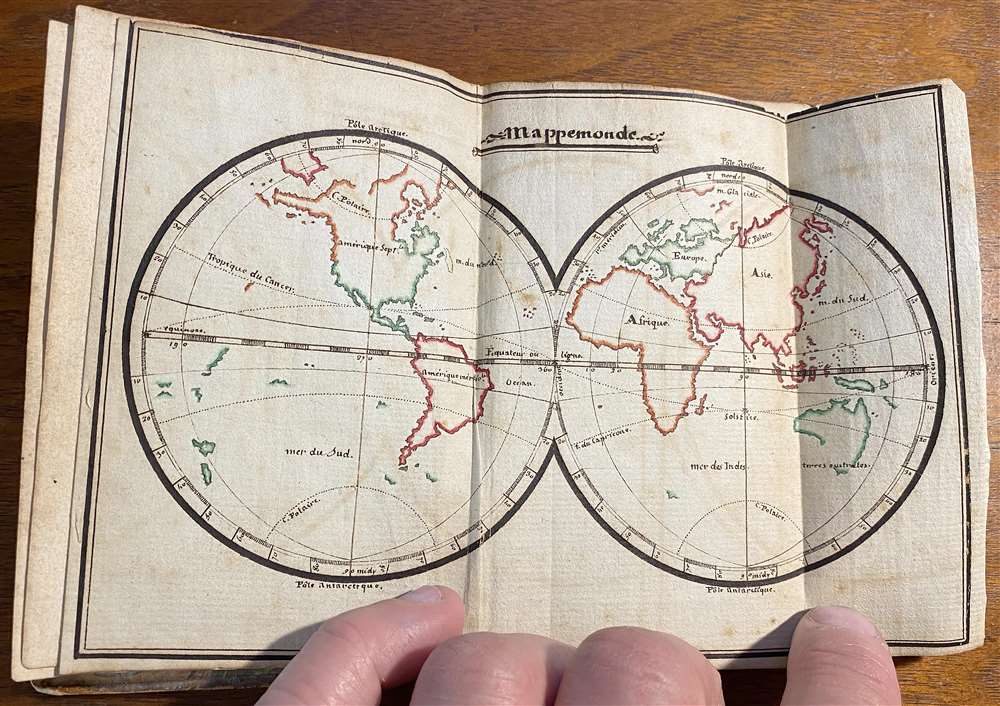 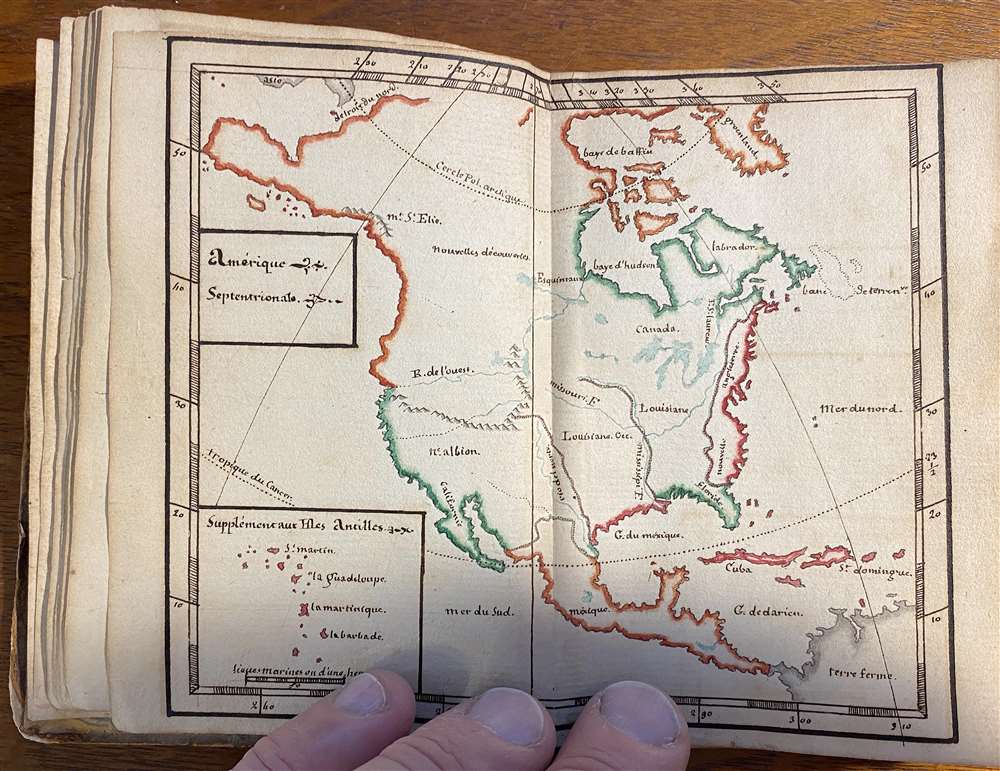 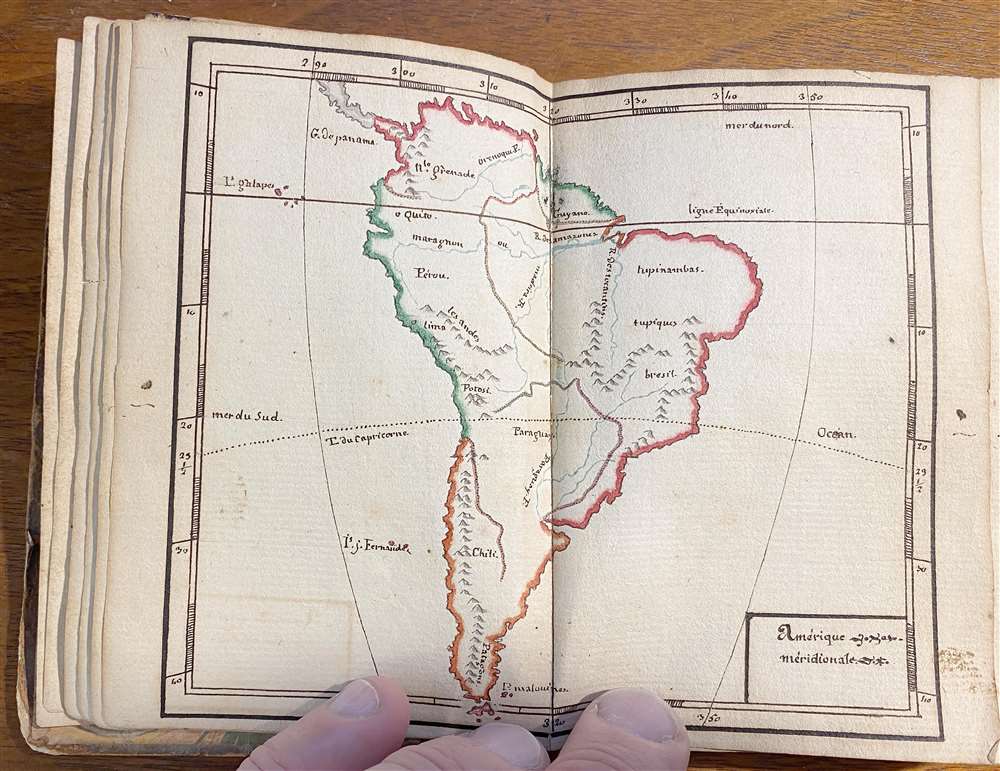 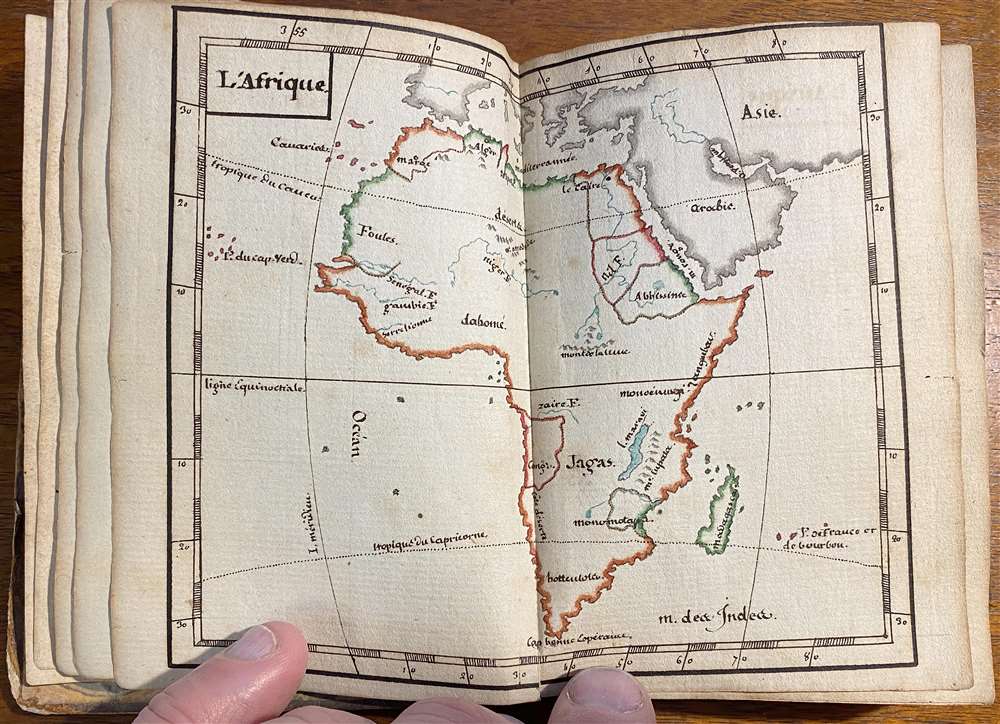 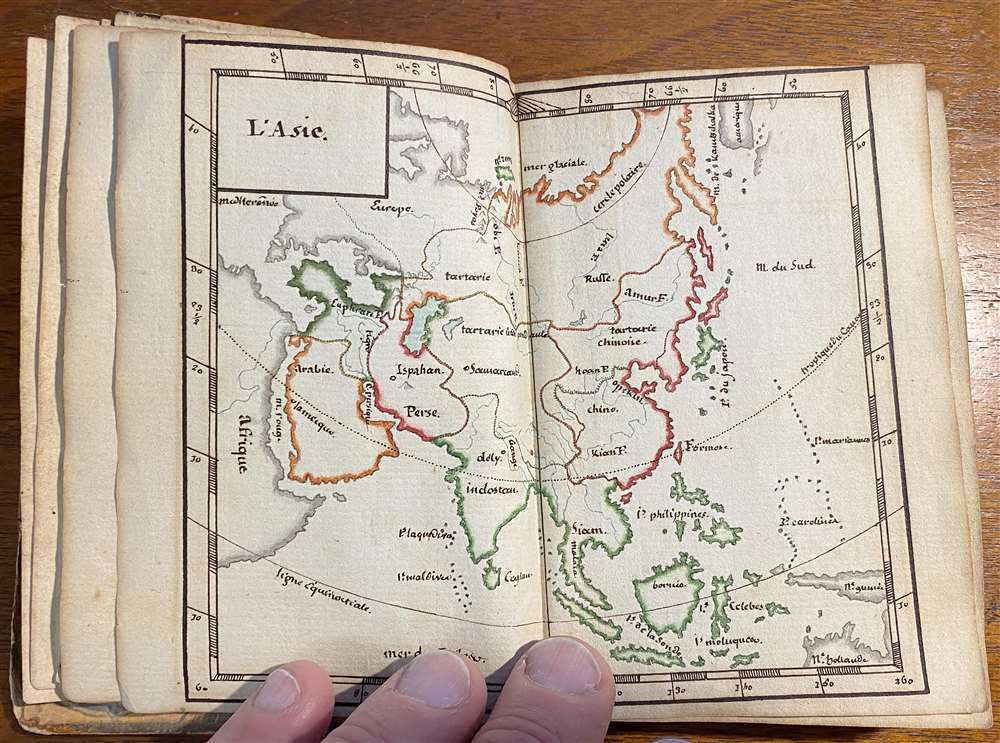 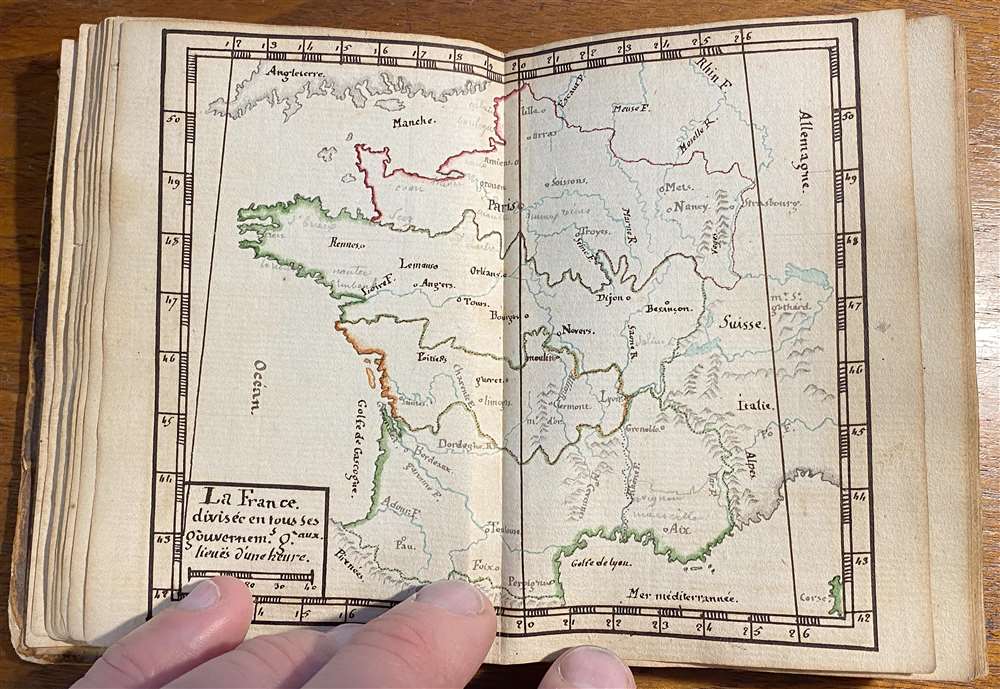 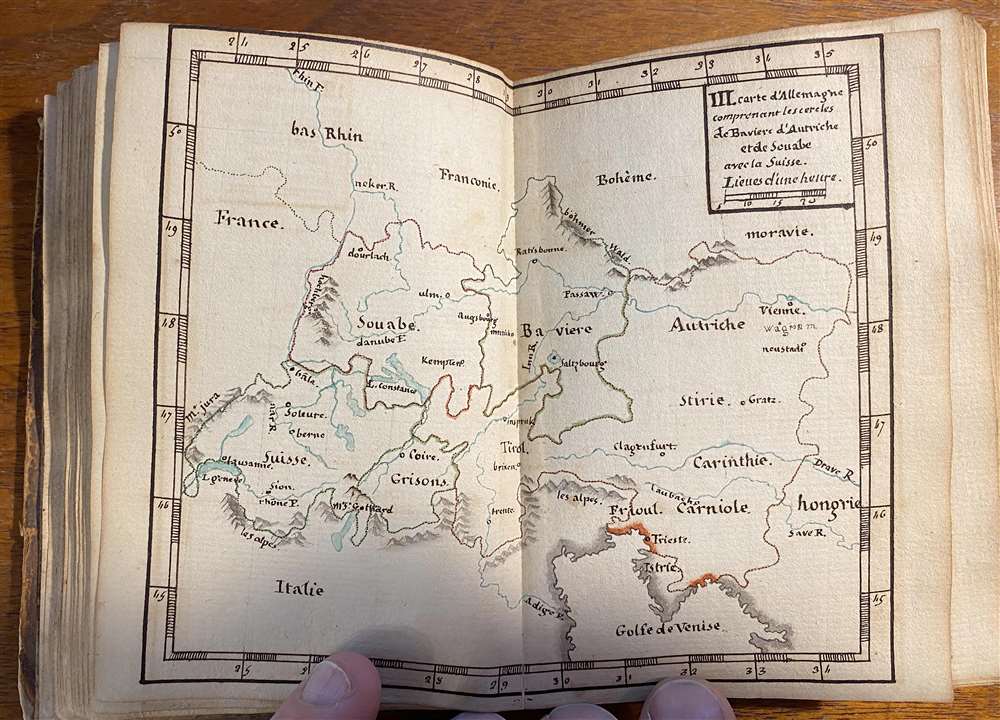 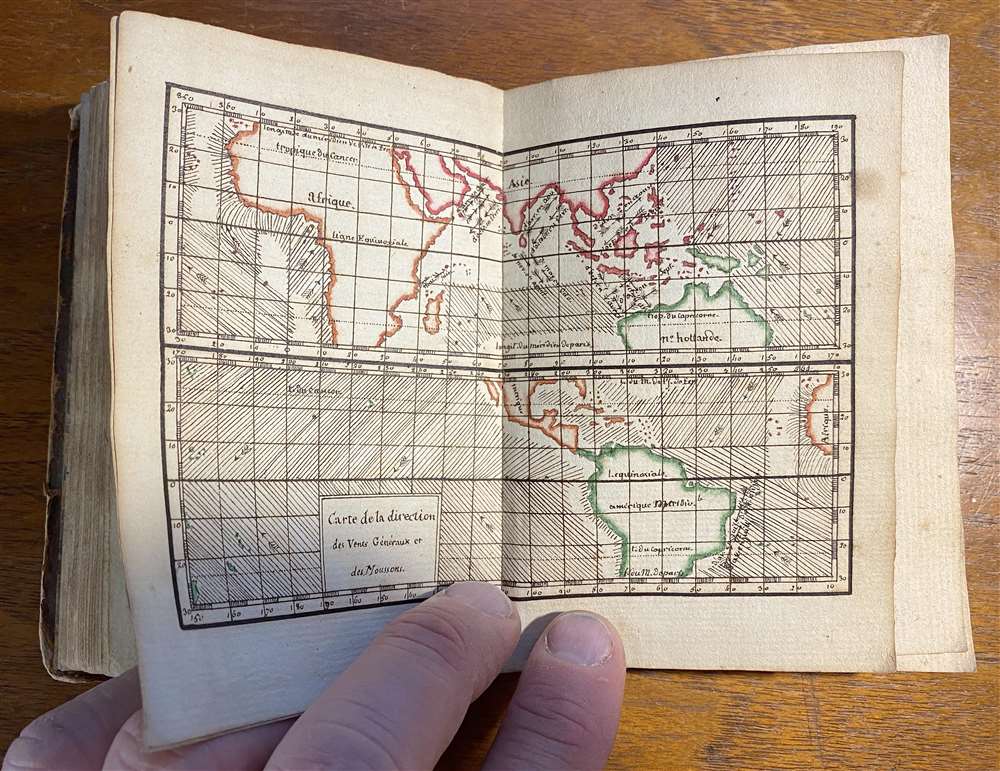 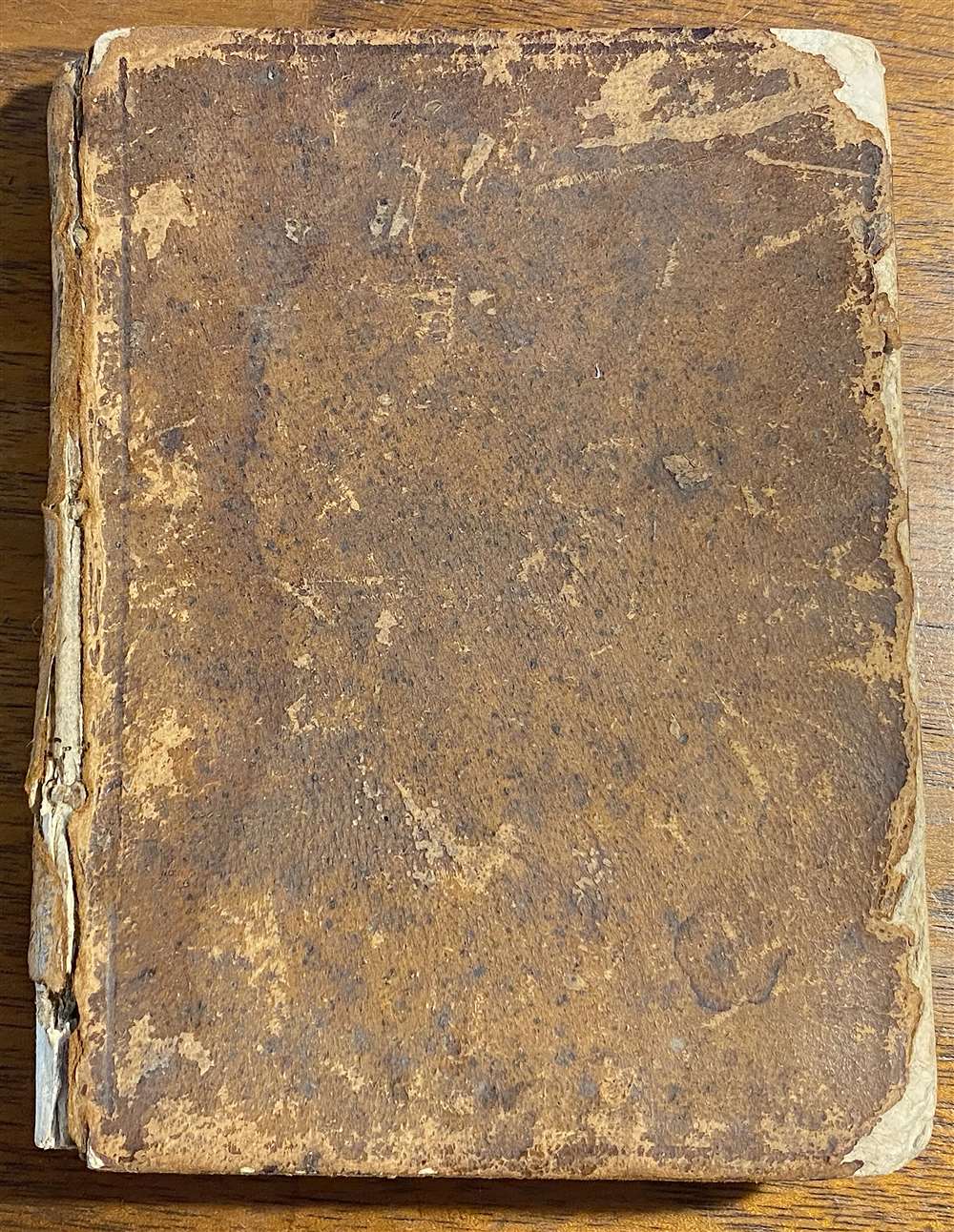 1793 Manuscript Pocket Atlas of the World

This is a beautifully-executed late 18th manuscript pocket atlas of the world. It is a student work - similar to later, 19th century 'schoolgirl' or 'schoolboy' maps - but has been produced with an unusual level of uniformity and care, and it has been attractively bound. The maps, all done in the same hand, are painstakingly drawn and lettered, and have been carefully and attractively illuminated in original hand color. While we generally associate this form with 19th century British and American students, this example is the work of a late 18th or early 19th century French student - or possibly more than one, as some place name notations appear in a different hand, and possibly at a later date than either of the source maps.

Students of history and geography, well into the 19th century, were expected to be able to digest and reproduce the work of authorities in the field; the process of producing fair copies of a map taught not only geography and history but also geometry, mathematics, penmanship, and the values attendant to the careful production of a beautiful object. Students would use, as the basis of their maps, whatever general or student atlases were made available to them.

In the present work, fifteen of the seventeen maps are reduced and slightly simplified versions of the maps of Brion de la Tour's 1774 Atlas et Tables Élémentaires de Géographie. Two of the maps, however - the British Isles, and a map showing the directions of prevailing winds and monsoons around the globe - appear to have been sourced from the 1793 Bonne Atlas Portatif.

In addition to the world map and the continents, the atlas contains maps of France, Spain, Italy, and the British Isles; three maps cover parts of Germany

For the most part, throughout the atlas, the unknown student adhered to the source maps of 1774 and 1793 - sometimes omitting detail for clarity, but not adding it, save in the occasional nautical flourish, with two exceptions. On cartes II. and III. d'Allemagne, the place names 'Austerlitz' and 'Wagram' have been added. Neither appear on the original Brion de la Tour maps, and in both cases, other place names present on the source maps have been omitted. So why Austerlitz? Why Wagram?

Both names appear in a different, less formal hand than the neat calligraphy which characterizes the rest of the work. Neither location was of particular importance or consequence at all - until the Napoleonic Wars, in which each place would be the site of a crucial French victory: the 1805 Battle of Austerlitz, also known as the Battle of Three Emperors, and the costly French 1809 victory of the Battle of Wagram, which marked the end of the War of the Fifth Coalition. Especially as the handwriting for these names appears nowhere else in the atlas, we suspect these notations to be those of a different student than who executed the work: perhaps even a son; if the book were completed near the 1793 date of the Bonne maps, sixteen years pass before the battle of Wagram.


Rigobert Bonne (October 6, 1727 - September 2, 1794) was one of the most important French cartographers of the late 18th century. Bonne was born in Ardennes à Raucourt, France. He taught himself mathematics and by eighteen was a working engineer. During the War of the Austrian Succession (1740 - 1748) he served as a military engineer at Berg-op-Zoom. It the subsequent years Bonne became one of the most respected masters of mathematics, physics, and geography in Paris. In 1773, Bonne succeeded Jacques-Nicolas Bellin as Royal Cartographer to France in the office of the Hydrographer at the Depôt de la Marine. Working in his official capacity, Bonne compiled some of the most detailed and accurate maps of the period - most on an equal-area projection known erroneously as the 'Bonne Projection.' Bonne's work represents an important step in the evolution of the cartographic ideology away from the decorative work of the 17th and early 18th century towards a more scientific and practical aesthetic. While mostly focusing on coastal regions, the work of Bonne is highly regarded for its detail, historical importance, and overall aesthetic appeal. Bonne died of edema in 1794, but his son Charles-Marie Rigobert Bonne continued to publish his work well after his death. Learn More...

Very good. Small calfskin octavo, gold embossed on spine. Seventeen maps, pen and ink with original hand color. Some minor splits at folds, upper and lower margins close, some trimming. Spine cracked and corners worn, with some worming within binding not affecting images.
Looking for a high-resolution scan of this?